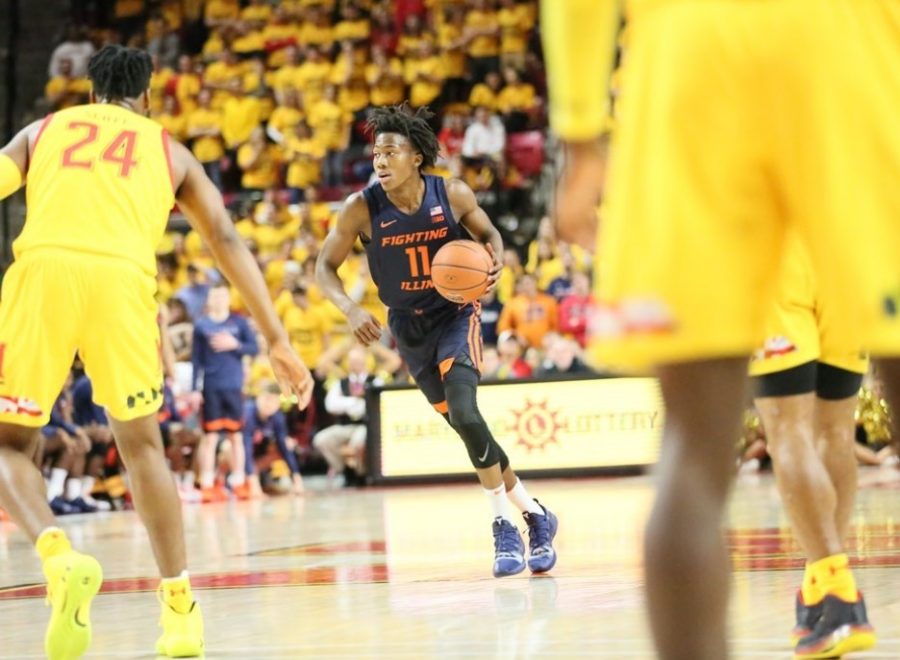 Sophomore guard Ayo Dosunmu dribbles the ball down the court during Illinois’ game in Maryland at College Park, Maryland. The Illini lost 59-58 in the final two seconds on Saturday.

The Illinois men’s basketball team looked to have secured its first signature road victory under Brad Underwood. Still, a frantic final few minutes saw the team squander the lead when No. 3 Maryland stole a 59-58 win.

Contrary to Monday’s loss to Miami, Illinois started the game hot, leading by as many as 14 points, which happened to be the halftime advantage. Illinois dominated the first 20 minutes, 39-25.

Underwood shook things up in the starting lineup, turning to junior Da’monte Williams instead of senior Andres Feliz as the third guard. Although he didn’t provide much offense, Williams tied for the team lead with eight rebounds.

The Illini were on cruise control as the clock ran down in the second half, but the Terrapins refused to go away. Trailing 57-50 coming out of the final TV timeout, Maryland sophomore forward Jalen Smith expertly sold a pump fake, freeing himself for a wide-open three-point shot, which he swished.

On the other end, Illinois, which played without freshman center Kofi Cockburn down the stretch despite having extra fouls to give up, couldn’t create an open look. Sophomore guard Ayo Dosunmu forced a long three, but fellow sophomore forward Giorgi Bezhanishvili bailed him out with an offensive rebound. However, Maryland guard senior Anthony Cowan, the smallest player on the floor, quickly reached in and caused a jump ball, rewarding possession to the Terrapins.

As Maryland came down the floor, Illinois left forward Donta Scott wide open under the basket, and the freshman deposited a layup to make the score 57-55.

The made basket gave Scott a bit of overconfidence, however, as he aggressively defended Illinois’ inbound play and fouled an Illinois guard, junior Trent Frazier.

After the teams traded misses, Maryland secured an offensive rebound and called a timeout with 30 seconds remaining, down three.

After a broken play, Cowan was left alone several steps behind the arc but hoisted anyways. The shot sailed through, and all of a sudden, the Illinois lead officially evaporated.

The Illini came down the floor with Cockburn still out and tried to run some sort of action for Feliz, but the senior lost possession and fouled Cowan with two seconds remaining in the act of trying to regain the ball.

Cowan stepped to the line, drained the first and intentionally missed the second. The Illini couldn’t get a shot off in time, and in the blink of an eye, squandered what looked like a signed, sealed and delivered victory.

There wasn’t enough offense for Illinois. Frazier and Feliz were the only players to break double figures, while Dosunmu scored just nine points and was inefficient from the field. This team’s personnel puts it in a position where it needs to outscore teams to win, and the Illini have the offensive firepower to get things done. It’s unclear whether Underwood will sit Cockburn in the final minute of close games, given the freshman has proven to be efficient, registering nine points and eight rebounds in only 21 minutes Saturday.

It doesn’t get any easier for Illinois either; a top-10 Michigan team comes to town Wednesday.