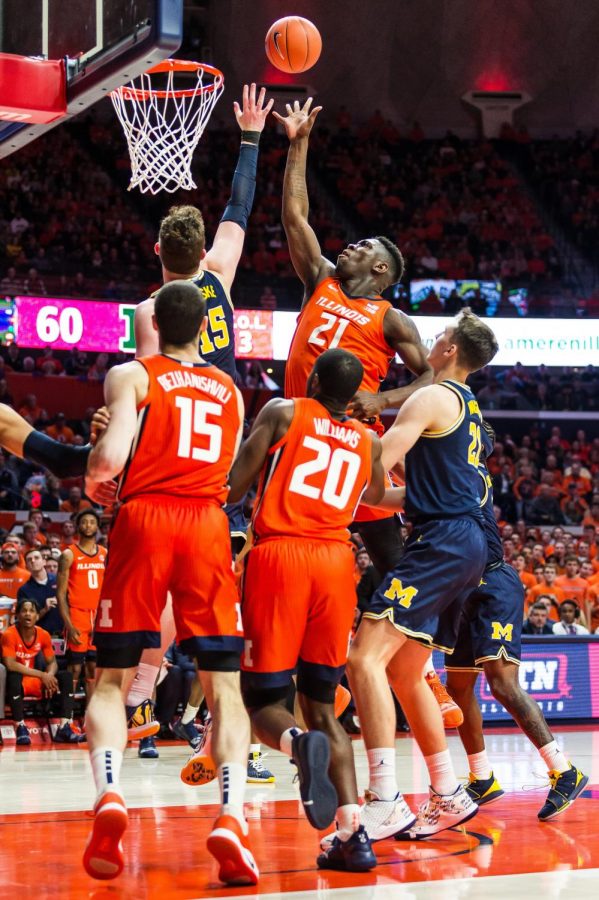 Coming off of a loss at No. 4 Maryland where Illinois’ game-long lead seemed safe until the very end, the Illini dealt with a relentless Big Ten schedule and welcomed No. 5 Michigan in the conference matchup at home.

Unlike in its loss to Maryland, Illinois seized control in the second half of the game and held on for a 71-62 victory – a performance capable of turning around what’s been a season of underachievement thus far.

Although both teams profile as offensive-oriented, neither could get things going from behind the arc all night, as Michigan finished 3-18 in three-pointers while Illinois sat at 1-11.

To compensate, the Illini had to feed freshman center Kofi Cockburn down low. The big man finished with 19 points and 10 rebounds and even tallied four blocks as well.

“Coach told us to keep them in the interior because they’re really good shooters,” Cockburn said. “We just forced a two-on-two game, told the guards to get the shooters and controlled the middle.”

Along with aiding Cockburn, the Illini circumvented their struggles from deep by creating easy two-point shots.

Underwood joked that Wednesday’s night’s performance reminded him of basketball before the three-point line was introduced.

“Giorgi (and) Kofi were really efficient and really effective in the paint tonight,” Underwood said. “We got enough easy baskets downhill with Ayo and Dre (Feliz) on a night (where) obviously there weren’t a lot of threes made. It was just a good hard smashmouth game.”

The Illini carried a 30-28 lead into the halftime break, and extended it through the second half, leading by as many as 12 points.

Just as Illinois looked like it secured the victory before the under four-minute timeout, Cockburn completed an and-one layup and proceeded to celebrate with a fist pump. However, his hand accidentally struck a referee and the shocking moment appeared to take the life out of the building. Cockburn missed the ensuing free throw and Michigan followed with a run.

“Giorgi gave me a little coffee before the game so that was a big part of it,” Cockburn said jokingly. “Yeah, I’m just a really emotional guy, my team’s been through a lot, we’ve lost tough games and I just love them so much. In that moment we’re winning, we’re up, and it’s just basically me being passionate about the game and unfortunately, that hit him and I went to see him after and told him I was really sorry about it.”

The Wolverines began to press the Illini full court with the clock winding down, and came as close as four points with the chance to cut it to one, but Michigan’s David DeJulius missed the three-point shot to do so.

From then on out, Illinois bled the clock and went home with its first Big Ten victory, knocking off the No. 5-ranked team in the country.

After the victory Illinois students didn’t storm the State Farm Center court, which served as a nod to the heightened expectations for Underwood’s squad this season.

“We’re right there, it’s gotta be a belief,” Underwood said. “We’re 1-1 along with just about everybody else in this league and it’s gonna be that kind of year. It’s gonna be hard-fought, and we’re just as good as anybody.”

“It feels great, especially coming off of Saturday’s game against Maryland, letting that one slip away,” Dosunmu said. “We could’ve easily put our heads down, easily looked for sympathy, but that’s not how we approached this game, I applaud our team.”

Senior guard Andrés Feliz was a sparkplug off the bench, scoring 13 points with a critical and-one that brought the crowd to its feet and essentially iced the game late.

The win moved Illinois to 7-3 on the season overall, with a three-game dip out of Big Ten play on the horizon.