Notes and Grades: Illinois v. California in the Redbox Bowl 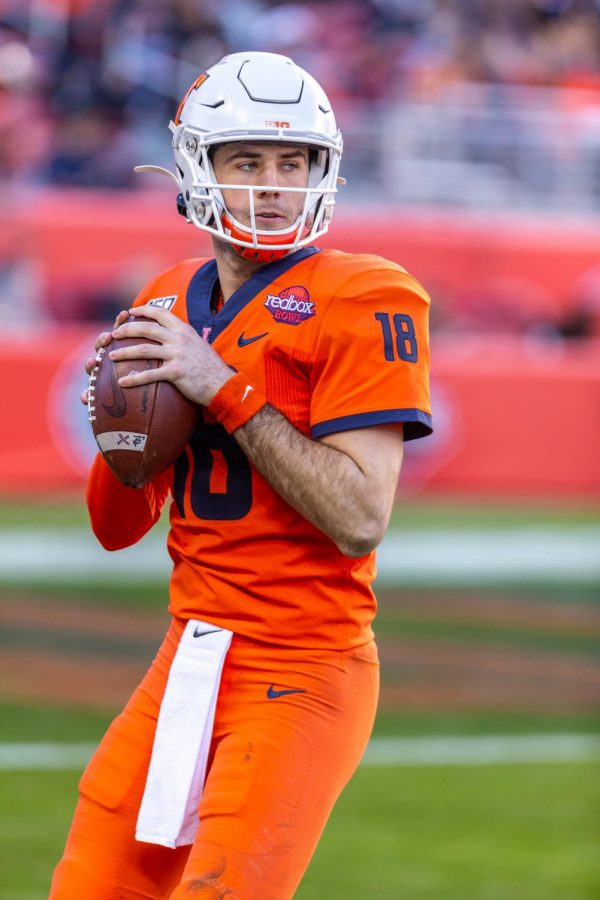 Quarterback Brandon Peters prepares to throw the ball during the Redbox Bowl in Santa Clara, Calif. Monday. Peters was an important piece in Illinois' offense during the bowl game against California on Monday.

Back during Illinois’ Spring Game in April, there weren’t many people who felt entirely optimistic about Illini football. Anyone watching could’ve pointed out the defensive troubles, passing game struggles or repeated roster turnover over the last few years. The records, and game scores associated with them, spoke for themselves.

When head coach Lovie Smith proclaimed that Illinois would be a different football team at Big Ten Media Day, it was far from the most dramatic headline. In fact, many were calling for Athletic Director Josh Whitman to fire Smith just three years into his contract.

It’s safe to say those doubters, far and wide, have been silenced. It’s easy to get lost in the details of what went wrong in the 2019 Redbox Bowl for Illinois, but one thing should be clear.

Illinois Football achieved a milestone this year. There’s plenty to look at when the coaching staff goes back to the drawing board in the offseason. But now, as the Illini rollercoaster finally comes to a stop, here’s the rundown of their Bowl Game performance.

“There’s a lot to build on,” Lovie Smith said. “It’s a process, and as we continue to take steps with our program, a bar has been set. It was a lot of fun going to our first bowl game and we’re excited to see what the future can be.”

Nobody looked happier to be in this game than Chase Garbers, and no one paid for it more severely than Illinois’ defense. With his commandeering of the Bears’ ship offensively, saying Illinois’ defense looked helpless to stop him early on is an understatement.

The Illini showed serious energy in the first possession, and with two early sacks on Garbers from Eifler and Betiku looked poised to bully the Bears offense and set a tone in the first.

It gets worse from there. In their next possession, after being squeezed at Illinois’ 3-yard line, Garbers threw a 38-yard prayer that was answered by Makai Polk, effectively killing the momentum that Illinois’ defense was building. 7 plays and 46 yards later, Garbers is running the ball in for the Bears’ second touchdown.

Garbers definitely caught his stride towards the end of the half. Already up 14-10, Garbers completed a 25, 18 and 26-yard pass in three consecutive snaps to advance the ball right down to California’s endzone for their third touchdown.

By the ten-minute mark in the third quarter, Garbers already had 200 passing yards, while Brown Jr. rushed for over 100 yards on 14 attempts and Makai Polk tallied over 100 receiving yards on just five catches.

The Bears, already flourishing offensively, also scored four of their drives following pass interference calls on the Illini. Without forcing any turnovers, the Illini remained effectively powerless to stop any of the Bears’ drives offensively.

“Today, we didn’t play well and you have to give Cal credit for that,” Smith said. “We pride ourselves on taking the ball away, but when an offense doesn’t give us opportunities, we have to finish our 3rd downs. Those are things we’ve done well all year, but today we just didn’t get it done.”

As a team, the defense finished with four penalties, gave up 272 passing yards and 123 rushing yards as the two-person tandem of Garbers and Brown Jr. took turns picking the defense apart.

Both teams opened up feeling out an unfamiliar opponent, which led to a very punch-counterpunch sequence of possessions coming out of the first quarter. Individually, Brandon Peters, the lone Illini with prior bowl experience, shined. After opening up with a 30-yard run into California’s endzone, and going blow-for-blow himself with the Bears’ Garbers.

But after a very strong first quarter, the Illini stalled. Their first possession in the second was short-lived, with just 14-yards being gained across four plays before being forced to punt, a trend that would plague the Illini for much of the rest of this game (and entirely in the second half).

Going down 28-10 opening up in the half, the Illini were determined to turn this bowl game into another Wisconsin/Michigan State. But offensively such a comeback never really materialized.

Instead, the Bears defense set the tone for the second half and opened up pushing the Illini back six yards from their starting drive at Illinois’ 20-yard line. From there the Illini had three consecutive drives that swallowed up almost nine minutes of time in the third period with nothing to show for it.

Nevertheless, given the types of miracles this Illinois team has performed late in-game, it felt hard to write off the outcome of this game entirely. The Illini finally broke through the Bears’ with a 9-play, 75-yard drive which Reggie Corbin exchanged for a late Illinois touchdown with eight minutes remaining.

After forcing a quick stop and receiving the ball back, the Illini could’ve given themselves a late chance to steal away this game, but a collapse on the offensive line, combined with an impending sack and desperate throw from Brandon Peters turned into an interception that effectively snuffed out any chance of working miracles on Monday afternoon.

It’s fitting that the lone offensive player with bowl experience be the quarterback. In a game that featured several rough sequences on both sides of the ball, Peters looked composed, even as the game begun to unravel right in front of him.

Peters was everything the Illini needed and more from the jump. With the passing game starting off slow, Peters found himself picking up rushing yards of his own, escaping the pocket all but once as the Bears’ defensive line attempted to close in.

Among those carries, perhaps the most memorable would be his attempt to convert on a 4th and-17 with three minutes left in the fourth, where he fully extended himself and leaped out of bounds on the California sidelines that came up just inches short of a first down.

Peters remained very active in the passing game despite throwing a late interception and really missing the hands of Josh Imatorbhebhe to throw to. Featuring new targets such as Carlos Sandy, Trenard Davis, and a pass play that saw Isaiah Williams get his first career receiving yards as an Illini, Peters finished the afternoon throwing for 273 yards and completing 22 of his 37 attempts. With one more year of eligibility, a much healthier offense this time next year could benefit both Peters and the Illini tremendously.

“This football team has come a long way. We’re disappointed of course, but we’re going to go in thinking about that play that Brandon tried to make on fourth down.” Smith said. “He’s found a home here, and I can’t wait for him to be in a leadership role for an entire season.”