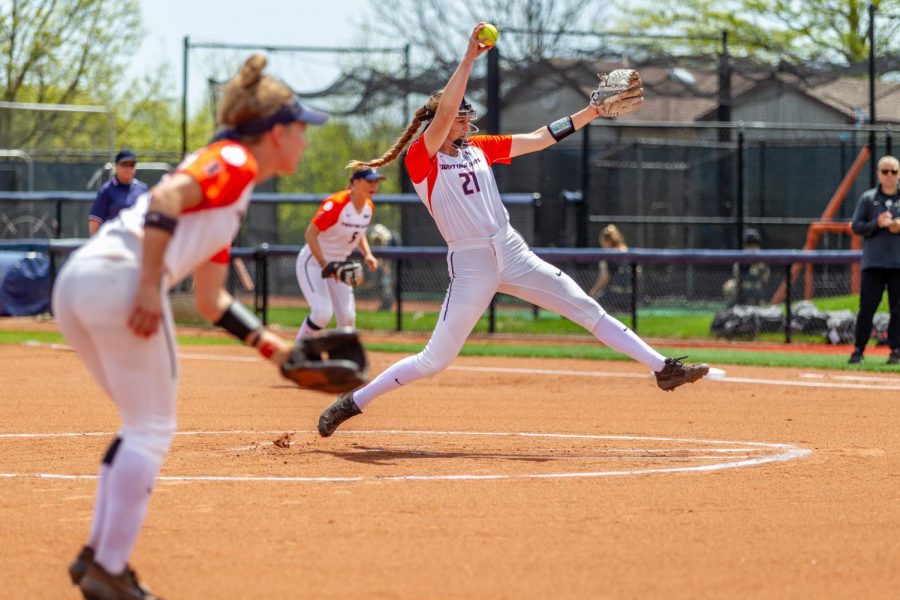 Freshman pitcher Sydney Sickels pitches during Illinois’ game against Purdue on May 5 at Eichelberger Field. Illinois is set to open their season early February with several new players.

The Illinois softball team is searching for success in several new additions joining the squad this spring. With head coach Tyra Perry heading into her fifth season at Illinois, she looks to bring the Illini back to the postseason for the first time since 2017.

Offensively, several new freshman position players will look to make an impact as the Illini will have major shoes to fill with outfielders Kiana Sherlund, Carly Thomas, Veronica Ruelius and infielder Annie Fleming graduating from the program in 2019. The four Illini provided a lot of stability to the lineup, combining to hit 30 home runs and drive in 129.

Catcher Stephanie Abello also graduated from the program last year after knocking in 18 runs over 93 at-bats. However, junior Bella Loya will be back after starting all 58 games last year, primarily at catcher, and leading the team in RBIs (48), home runs (12), and on-base percentage (.450) last season. Loya will be joined by other returning players looking to improve upon solid seasons like sophomore Kailee Powell, junior Katie Wingerter and junior Maddison Demers.

Illinois returns sophomore ace Sydney Sickels to lead the pitching staff after having a terrific freshman campaign where she posted an outstanding 3.41 ERA while striking out 131 batters over 172.1 innings.

However, the pitching staff will have gaps to fill following the loss of two main hurlers from the 2019 campaign: seniors Taylor Edwards and Emily Oestreich. Both pitchers combined to throw 167 innings and win 11 games for the team.

Perry said she hopes to reinforce her bullpen with the arrival of freshmen Morgan Scivally from Kankakee, Illinois, Taylor Murray from Freeport, Illinois, and sophomore transfer Addy Jarvis. Jarvis, a native of Vienna, Ohio, pitched at an elite level at Youngstown State during her freshman year. In over 33 appearances, Jarvis tossed 16 complete games for a total of 170.2 innings pitched with a dazzling 2.58 ERA. Senior Akilah Mouzon will also return after appearing in 19 games last season.

After finishing with a 33-25 overall record in 2019, Illinois was recently selected to host the Big Ten Conference Softball Tournament for the first time since the softball team’s inception in 2000.

The Illini open their season against the Liberty Flames in Clearwater, Florida, for the National Fastpitch Coaches Association Leadoff Classic from Feb. 7-9. The full Illini softball schedule can be found here.