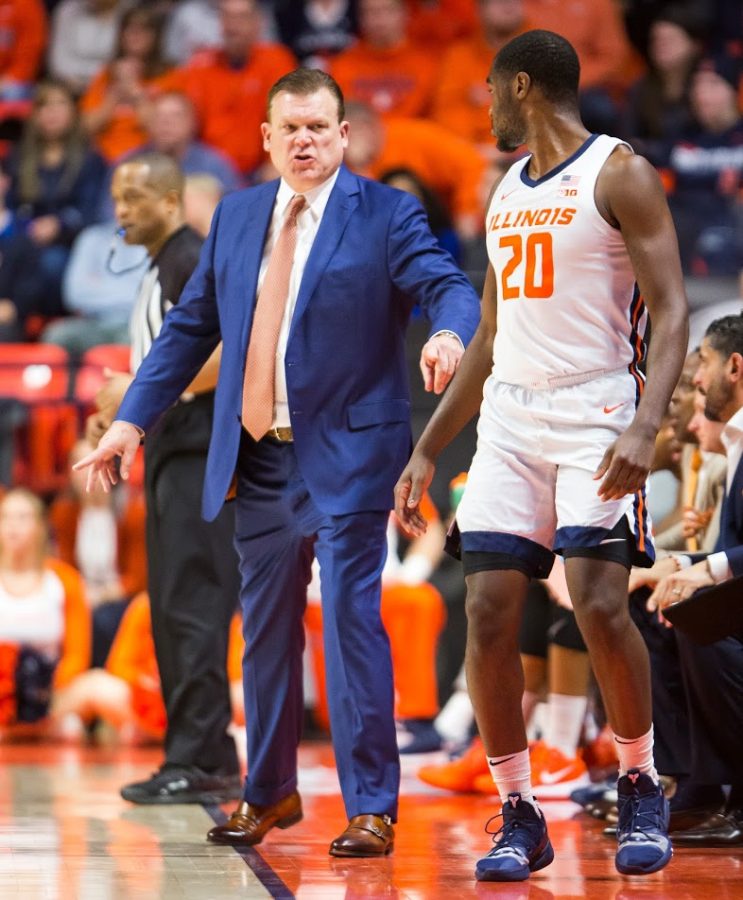 Illinois head coach Brad Underwood speaks to junior guard Da’Monte Williams as he checks in during the first half at State Farm Center on Thursday. Sunday, the Iowa Hawkeyes snapped the No. 19-ranked Illini’s seven-game winning streak, 72-65 in Iowa City, Iowa.

One of the dilemmas that keeps some college basketball coaches up at night is the quandary of whether to foul or play out a defensive possession late in a close game.

Illinois head coach Brad Underwood, unfortunately, made the wrong choice on Sunday, as he decided to let No. 18 Iowa run the clock down under a minute. The Hawkeyes were leading by four and junior center Luka Garza drained a three with 38 seconds left to essentially ice the victory.

In a matchup pitting two of the top candidates for Big Ten Player of the Year, it was Iowa’s star man who decisively won the battle, as Garza finished with 25 points and 10 rebounds, whereas Illinois sophomore Ayo Dosunmu put up just 11 points.

When freshly activated sophomore Alan Griffin, marking his first game back following a two-game suspension for stepping on Purdue’s Sash Stefanovic in West Lafayette, Ind., hit a three with 5:44 remaining, it looked as though the Illini were beginning to take control, going up 23-15 after the make.

But, as the case has been for many teams facing the Hawkeyes this year, Garza and sophomore guard Joe Wieskamp quickly revived Iowa with an 8-0 run by themselves, and the Hawkeyes trailed by just one at the break.

The second half was a back and forth affair, with neither team able to run away from the other. While Illinois’ usual leading scorers, Dosunmu and freshman center Kofi Cockburn, were not their usual selves, senior Andres Feliz was again electric off the bench, scoring 17 points to lead the Illini.

Hostile road environments have the tendency to affect younger players, which makes up a majority of the Illini’s roster. But guidance from seasoned players like Feliz can calm the nerves when the Illini are away from the State Farm Center, and the senior has now scored in double figures four times on the road this year.

The end of the game was filled with miscues both ways, as neither team scored between the three minute mark and Garza’s dagger.

In the postgame handshake line, Illinois assistant coach Ron Coleman was caught on camera repeatedly saying “that’s bullsh*t” to Iowa head coach Fran McCaffery. McCaffery said he was upset with the physicality of Illinois’ player on the final possession of the game, predating jeers shared by both teams immediately following the final second.

McCaffery proceeded to yell back at Coleman, as well as the entire Illini assistant staff, before quickly walking out of the handshake line in disgust, instructing his players to follow suit.

The scene concluded a highly competitive battle between the Big Ten’s two brightest stories of the season. It’s worth noting that the two teams square off again in Champaign on March 8, so the bad blood may between the teams not have seen its last day.

The game ended bitterly, as the Hawkeyes quickly outleted a rebound after sophomore Giorgi Bezhanishvili missed a point-blank, open layup. Instead of dribbling out and waiting for a possible foul, Wieskamp dunked the ball, inciting raucous cheers from the Carver-Hawkeye Arena crowd in the process.

For Illinois, the seven-game win streak is over, and the schedule does the Illini no favors. The next two matchups pit Illinois against the conference’s two highest-ranked teams who both happen to own victories over the Illini this year, Maryland and Michigan State, which means the Illini need to quickly move on from Sunday’s disappointment, as greater challenges lay ahead.