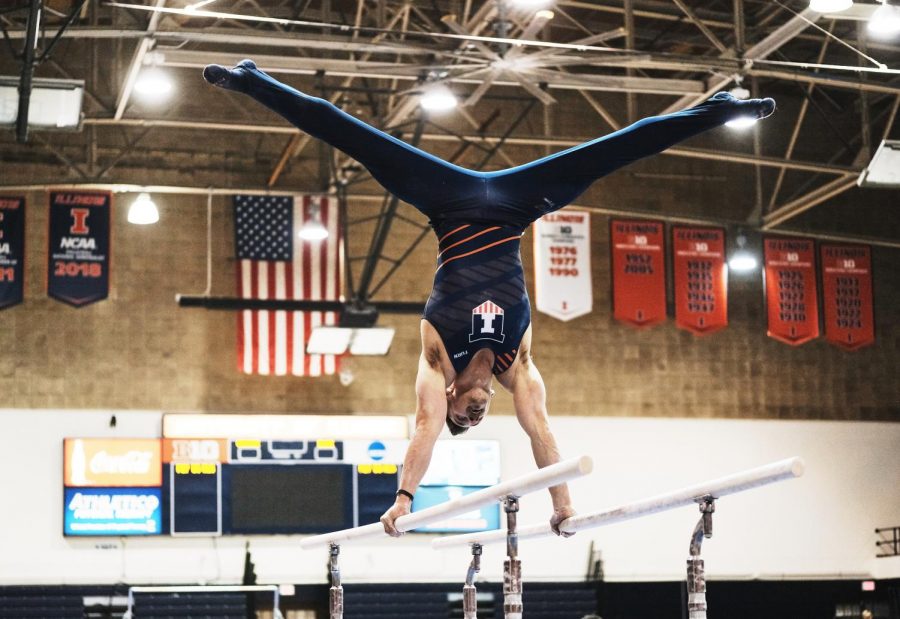 The Illinois men’s gymnastics team defeated the No. 3-ranked Nebraska Cornhuskers at Huff Hall Saturday. Illinois won the meet 407.05-399.85, improving to 2-1 in dual meets (1-1 in conference) this season.

Illinois dominated Nebraska for the first four events of the meet, accumulating a total score of 276.20 to Nebraska’s 267.40. All four event titles were claimed by Illini:  senior Sebastian Quiana on floor exercise, senior Michael Paradise on pommel horse, senior Danny Graham on still rings and junior Max Diab on vault. Graham and Diab set career highs in the events they won, and five other Illini also set career-highs in these events.

Prior to the meet, Illinois head coach Justin Spring said that accumulating an early lead was one of his keys to victory against Nebraska.

“Our first three events (floor exercise, pommel horse and still rings) are some of the best in the county,” Spring said. “The problem is our last two, parallel bars and high bar.”

Illinois struggled in both of these events against Nebraska and against Minnesota the week before. According to Spring, the team’s struggles in these events stem from not only inconsistencies and falls, but also low starting values his gymnasts have when they begin their routines, which make deductions even more damaging to individual scores.

Parallel bars and high bar were the only two events in which Illinois failed to outscore Nebraska, but Illinois was outscored by less than a point on both, which was not enough for Nebraska to overtake Illinois.

“We knew that we needed a pretty big buffer going into those two,” said Spring. “We had it, so it was enough.”

Despite the scaled-back routine, Kovach scored a season-high 13.65 on parallel bars, good enough for third place behind Nebraska’s Evan Hymnason and Illinois’ Sebastain Quiana, who tied for the event title with a score of 13.85.

“It’s the event that you shouldn’t miss,” Spring said. “We need guys to control their exertion on their strength.”

Spring said that by exerting their strength too much, gymnasts on still rings get worn out and might fail to stick the landing on the dismount, resulting in deductions.

“It’s an event that we need to be beating other teams by multiple points before we go into our lower-scoring events. We really got to fix that,” Spring said.

“We’ve been talking a lot lately about getting onto the guys in practice a lot more about missing routines,” Kovach said. “Instead of just shaking it off and saying it’s a fluke, we’re going to start really cranking down on them and expecting more from everyone on every event and not accepting missed routines anymore.”