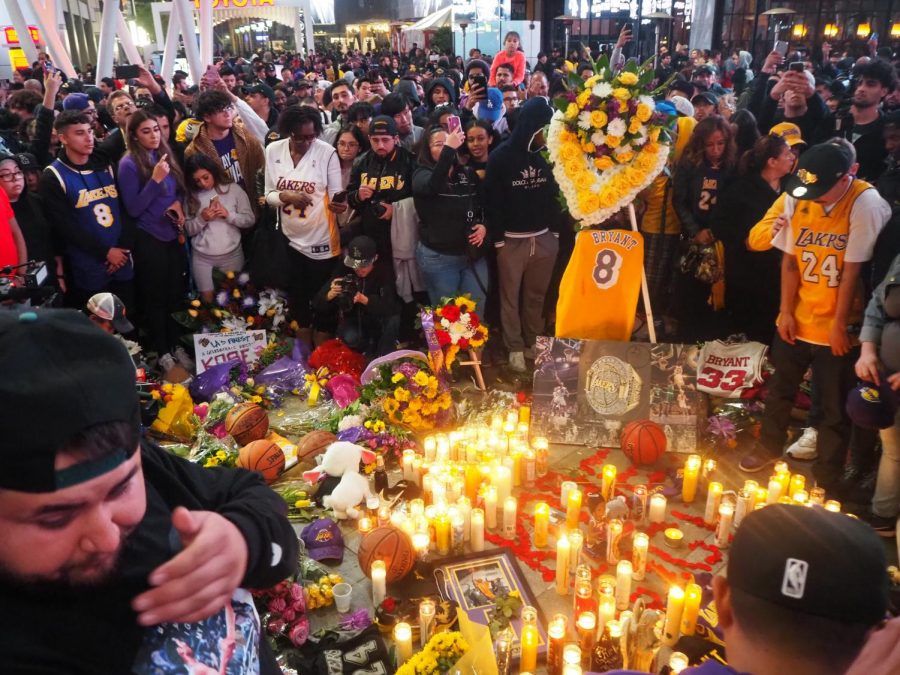 Mourners gather at the Kobe Bryant memorial at the Staples Center in Los Angeles on Jan. 26, 2020. Tributes to Bryant continue worldwide following the former NBA great died in a helicopter accident Sunday, Jan. 26.

Jan. 26 marked the tragic death of legendary basketball player Kobe Bryant. The former Los Angeles Laker, along with eight other individuals including his 13-year old daughter Gianna, were involved in a helicopter accident in Calabasas, California.

Around the basketball world, teams and players at all levels have honored the late Bryant in numerous ways, including several NBA players changing their uniform numbers and teams from high school to the professional level taking eight- and 24-second violations to begin games.

On Thursday night during Illinois’ game against Minnesota at the State Farm Center, signs relating to Bryant’s legacy were abundant in the building.

Although neither team took a violation to honor Bryant, nor did the State Farm Center air any sort of tribute on the Jumbotron, there were certainly other ways in which respect was paid to the NBA legend.

A large majority of players on both teams wore differing models of Bryant’s signature Nike shoes — both schools are endorsed by the company — including Minnesota sophomore center Daniel Oturu. Though low-top shoes, as most of Bryant’s Nike sneakers were, may not provide the most comfort for a 6-foot-10-inch, 240-pound player, Oturu decided nonetheless that honoring the legendary Laker was more important than foot support for one night, opting out of wearing Lebrons like he usually does.

Aside from the gear, Illinois finished the first half with 24 points and, coincidentally, also won the game by eight points, representing both of Bryant’s NBA jersey numbers.

At the halftime break, an impromptu fire alarm was pulled in the arena as well, a possible homage to Bryant, who was known to “catch fire” on the court quite often.

Beyond Thursday’s game, Illini sophomore guard Ayo Dosunmu has gone above and beyond to show admiration for Bryant. Aside from constantly wearing Kobes throughout his time at Illinois, on Jan. 26, Dosunmu changed his twitter profile picture to a blurry image of him and Bryant from Dosunmu’s high school days.

Ironically enough, Dosunmu had this to say after his dagger shot to beat Michigan on Jan. 25.

“The one person I could say is (Bryant) or Jordan because late-game, they’re doing one, two moves then they’re elevating to their spot, like (Bryant) when he hit that shot against the suns (in the 2006 playoffs),” Dosunmu said. “Off the tip, he got to his spot, he raised.”

Moments like Jan. 25 in Ann Arbor, Michigan, and Jan. 8 at Wisconsin prove Dosunmu has a bit of his own “mamba mentality.”

In his weekly press conference heading into the Minnesota game, Illinois head coach Brad Underwood made a moving statement expressing his respect for Bryant.

“I can remember as a kid, going to watch Larry Bird play at Indiana State (against) Wichita State, and those were the guys that became your idols and you watched them throughout their careers, and (they) always had a special place,” Underwood said. “That’s what (Bryant) was for this group, and, you know, there’s a shoe named after him.”

“It’s tragic what happened and, yet, he was so powerful, not just a great competitor; he won five championships,” Underwood said. “But because of what he was off the court, and what he stood for, and how hard he worked. I think everybody in the world in any sport, you’ve seen it touch every sport, literally. The greats in other sports: they know how hard we worked to become great, those stories are legendary, so there’s tremendous appreciation for greatness.”

“It’s very sad, and it does impact our guys,” Underwood said. “Sometimes our young people today don’t understand, he woke up that morning and expected to see his daughter play an (Amateur Athletic Union) game, and life was great, and next morning didn’t come, and our guys don’t understand that sometimes. They think they’re bigger than life itself, (and there are a) lot of lessons in that. (Griffin) had been around him, because of his father, and my son idolized him. They all had their moments and their day on (Jan. 26) in disbelief.”

It’s unlikely tributes to Bryant will end anytime soon, and it will be interesting to see if Illinois has anything specific planned in the coming games.