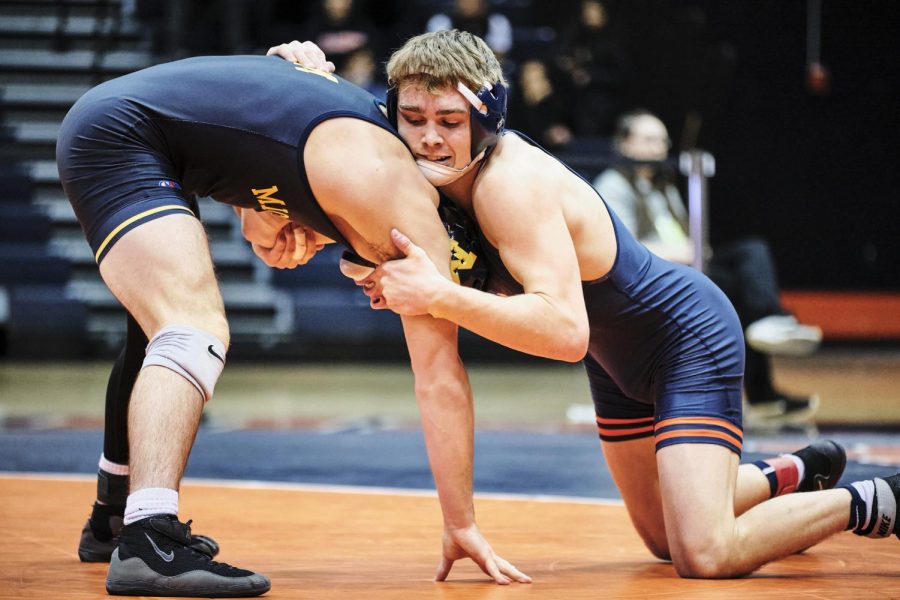 Senior Travis Piotrowski takes down Michigan opponent Garrett Pepple during Illinois’ dual meet against Michigan at Huff Hall on Jan. 26. The Illini are 7-3 overall and 4-2 in Big Ten conference play.

Piotrowski won the second match of the evening with a score of 7-3.

He scrambled with his opponent for a takedown in the first period and succeeded in earning the first two points of the match. He turned his opponent over onto his back for a four-point near-fall, entering into the second period with a score of 6-0. Piotrowski held his lead throughout the remainder of the match to win his bout.

Duncan and his opponent, Matt Santos, were unable to take each other down in the first period of the match, both wrestlers looking evenly matched.

In the second period, Duncan brought Santos to his knees and spun behind him to earn a takedown. Duncan then went into the third period stopping all takedown attempts from Santos and bringing in another victory to the Illini team.

Braunagel went out racked up a series of points, scoring 9-2 against his opponent.

Braunagel was fighting against his opponent at the start of the match for the first takedown and eventually scored first. He quickly let his opponent up for a follow-up takedown and ended the first period with a score of 4-1. He repeated his two takedowns in the second period and finished the match with a major decision victory.

Gunther began his match with an unsuccessful takedown attempt that turned into a takedown on his opponent Layne Malczewski.

In the second period, Gunther secured a takedown but was soon outmaneuvered and reversed by his opponent, going into the third period needing a takedown to even the score. Gunther shot for a takedown and was met by great resistance by Malczewski but persisted in the evening the score to enter overtime. Once the round began, Gunther quickly approached his opponent, setting up his attack and scoring the takedown to immediately win the match.

“He was reaching, so (I) hit that arm drag right away at the beginning and put him down,” Gunther said. “(It) felt good, it always feels good … ”

Wroblewski also entered overtime in his match. He and his opponent wrestled in the first period without being able to take each other down and ended the third period with a score of 1-1. Wroblewski then took his opponent down in overtime to add another win for his team.

Luffman won the final match of the night against his opponent, Christian Rebottaro.

The first period came and went with both wrestlers on their feet and defending all takedowns. The second period saw Luffman starting in the bottom position and reversing his opponent to end up on top and holding him down throughout the rest of the period.

In the third period, Rebottaro began in the down position and Luffman not only held him down the entire period but repeatedly brought Rebottaro up into the air and slammed him down into the mat every time he got to his feet to try and escape Luffman’s grasp. Luffman ended the night on a high note for the Illini and brought the crowd into loud and final applause.