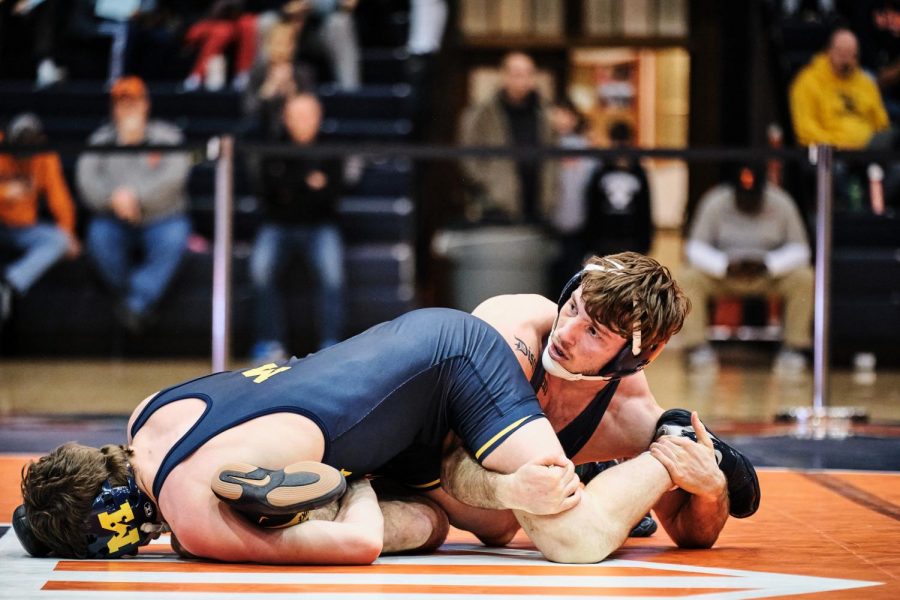 Dylan Duncan takes down Michigan opponent Cole Mattin during the Illinois dual against Michigan at Huff Hall on Jan. 26.

Cardani began his first period scrambling for a takedown, keeping his opponent controlled on the mat until the second period began. Cardani went on to wrestle the rest of the match, keeping a lead and finishing with a score of 4-2.

Piotrowski began his match with early dominance, scoring two takedowns and keeping his opponent on their toes.

“In the early periods I try to score as many points as I can,” Piotrowski said. “I go out there with every guy, with the same mentality that I’m just going to win and I’m going to do what I do best.”

“I felt that he was fading,” Piotrowski said, talking about his opponent in the third period. “I knew for a fact that I was going to get the (technical) fall.”

Duncan succeeded in scoring a takedown in the first period of his match and did not give up any points to his opponent when the round ended. He then chose the bottom position in the next period and reversed his opponent, ending up on top and controlling his opponent from there for the entire second and third rounds.

Braunagel quickly earned a takedown and two-point near-fall within the first period of his match, bringing the score to 4-1. The second period saw Braunagel choosing the bottom position and not only reversing his opponent but scoring a four-point near-fall and entering the third period with a 10-1 lead. Braunagel took his opponent down for the final time in the third period and ended his match with a score of 13-2.

Throughout the remainder of the match, Luffman’s opponent stalled and gave away two more points, but Luffman wasn’t satisfied. He persisted upon scoring a series of takedowns, lifting his opponent overhead to bring him back to the mat.

“I could hear my coaches screaming ‘keep scoring points, keep progressing,’” Luffman said. “(I was) listening to my coaches and putting faith in me, in my training.”

The Illinois wrestling team travels to Rutgers on Friday and Maryland on Sunday before returning to Huff Hall on Feb. 16 to take on Purdue.