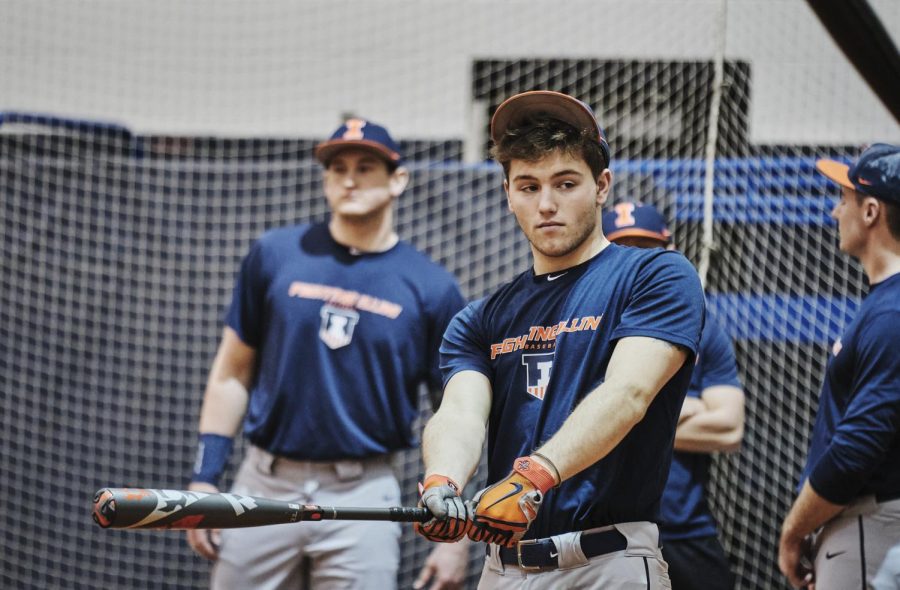 Xavier Watson swings a bat at the Irwin Indoor Football Facility on Wednesday. The Illini have added 18 freshman and transfer players to its roster for the 2020 season.

Illinois baseball is less than two weeks away from beginning its 2020 campaign. The Illini are almost ready to bounce back after an abrupt ending to their 2019 season in the NCAA tournament and will do so with 18 new players on the roster.

The Illini will present a balanced attack with 15 returning players, but team chemistry will be an ongoing improvement throughout the season. While the six transfers can relate more with the returners, the 12 freshmen have been equally welcomed by the veterans.

“I wasn’t really sure what to expect, but a lot of the seniors took it upon themselves to make sure the freshmen felt welcomed and make sure we feel like we fit in,” said freshman Xavier Watson said. “When we have team bonding, it’s not just the freshmen hanging out. We have the whole team together. We have seniors with freshmen, juniors with freshmen; it’s awesome.”

While this is Watson’s first collegiate season, he has a leg-up on some of the other newcomers as his brother, Cyrillo Watson, played for the Illini up until he was drafted by the Los Angeles Dodgers in 2019. Xavier said getting to know some of the upperclassmen through Cyrillo before becoming an Illini made him more comfortable when the fall began, but he has enjoyed growing closer with the team on his own.

With former Illini shortstop Ben Troike leaving a hole in the infield after getting drafted to the Tampa Bay Rays in 2019, both freshmen have a chance to earn early collegiate playing time alongside sophomore infielder Branden Comia. Comia filled both the second base and shortstop role after injuries to Troike and former Gold Glover Michael Massey opened up playing time.

The Illini will also have some new faces on the mound this spring. Seniors Garrett Acton, Ty Weber and Ryan Schmitt will continue to headline the bullpen but will be joined by seven newcomers, including six freshman and one transfer.

“The new guys will be a big deal,” Acton said. “They’re going to be really important in how we put together the mid-week games and especially on the weekend. We lost a lot of great arms with a lot leaving after last year, so those guys are really going to have to step up. I’m not sure how the pieces are really going to fit together yet, but all of the young guys have been great. They’ve really proven themselves and look to fill in those roles and have a lot of innings this year.”

Sophomore right-handed pitcher Ty Rybarczyk transferred to Illinois from Parkland in the off-season with three years of eligibility remaining.

Rybarczyk excelled at Parkland, named to the 2019 NJCAA All-America second team and the 2019 NJCAA Region 24 Player of the Year. He had a team-best eight wins and a 0.96 ERA. D1Baseball rated him the No. 25 sophomore prospect in the Big Ten for 2020.

The Illini bullpen also added freshman Cole Kirschsieper, the No. 41 left-handed pitcher in the nation according to Prep Baseball Report. Kirschsieper recorded a 0.42 ERA and went 10-1 as a senior at Lincoln-Way East.

The Illini newcomers will get their first shot at playing time on Feb. 14, 15 and 16, when they travel to North Carolina to play Milwaukee, Seton Hall and No. 18 Wake Forest.