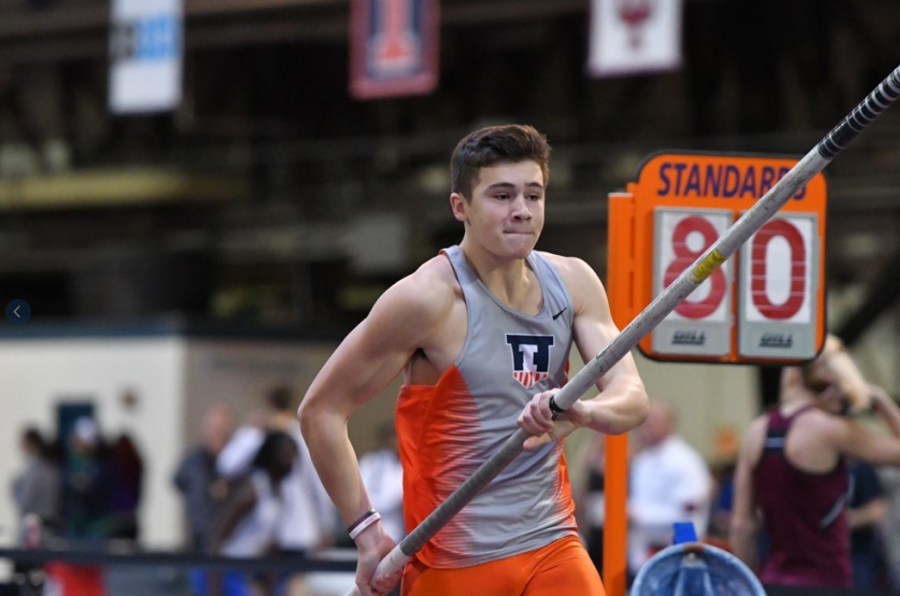 Cooper Jazo pole vaults at the Illini Classic on Jan. 14, 2017. The men’s track and field team will travel to Lincoln, Nebraska, to compete in the Frank Sevigne Husker Invitational this weekend.

The No. 21-ranked men’s track and field team will travel to Nebraska for the Frank Sevigne Husker Invitational this weekend.

The meet will begin on Friday at 4:30 p.m. at the Bob Devaney Sports Center Indoor Track and continue through Saturday, beginning at 11:30 a.m.

This is Illinois’ fourth meet of the season, including a home meet that took place at the Armory on Jan. 25 as well as the Larry Wieczorek Invitational at Iowa on Jan. 17 and 18 and the Indiana University Relays in Bloomington, Indiana, Jan. 31 and Feb. 1.

At the Indiana University Relays, the Illini did not win any event titles but placed in eight out of the 29 total contests. Redshirt-sophomore Irwin Loud placed fourth in the mile while redshirt-senior Jacob LaRocca and redshirt-junior Cooper Jazo who placed fifth and eighth, respectively, in pole vault.

The Illini were also competitive in the 800-meter dash, with redshirt-freshman Brendan Lockerby, sophomore Phillip Hall and freshman Edwin Siuda coming in first, second and third, respectively, for Illinois.

But Illinois coined several top-10 finishes at the Husker Invitational last season. In 2019, pole-vaulters Jazo and LaRocca also finished fourth and fifth in the event, respectfully.

Following the Husker Invitational, the Illini will travel to Nashville to compete in the Music City Invitational on Feb. 14 and 15. Live meet results can be streamed on FloTrack.com.