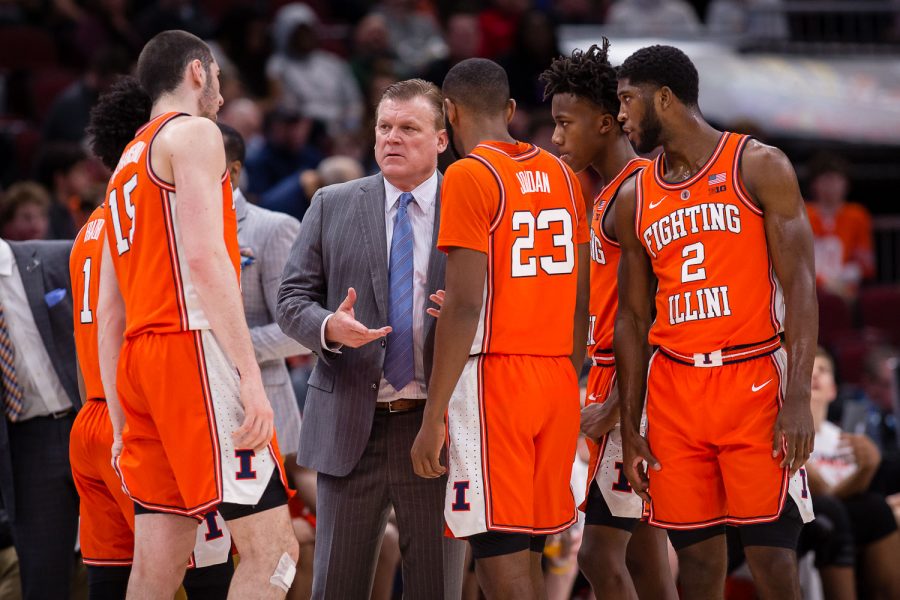 Illinois head coach Brad Underwood talks to his team during the game against Iowa in the second round of the Big Ten Tournament at the United Center on Thursday, March 14, 2019. The Illini lost 83-62.

In years past, it didn’t seem to matter what changed from year to year. By the time February came around, the Illini were still somewhere in the bottom-middle of Big Ten standings, requiring a miracle for them to still be playing after the Big Ten Tournament.

But now, there’s an expectation to keep a high-level of play going for seasons to come, which starts with recruiting top-tier talent to replace seniors Andres Feliz, Kipper Nichols as well as Dosunmu if he chooses to leave for the NBA draft after this season.

According to 247sports, Underwood and his coaching staff have the No. 11-ranked 2020 recruiting class in the country with two 4-star guards and one 3-star forward set to join the Illini in the fall. The trio of Adam Miller, Andre Curbelo and Coleman Hawkins is good enough for the No. 2-ranked class in the Big Ten, trailing only Michigan. Curbelo and Hawkins both signed their letters of intent, while Miller is the only a hard commit as of right now. But nothing is expected to change.

The class is highlighted by Miller, a 4-star guard from Chicago standing at 6-foot-3. Miller’s elite athletic ability, above-average shooting ability and his ability to play both guard positions have earned him the ranking of No. 33 in the nation and No. 2 in the state of Illinois, trailing only Duke commit DJ Steward.

Miller is wrapping up his high school career at Morgan Park High School, the same school that produced Dosunmu just two years ago.

Curbelo is a 6-foot-4 star guard from Puerto Rico. Fans can thank Orlando Antigua and his East Coast connections for the recruitment of Curbelo, who plays at Long Island Lutheran in New York.

Curbelo is another phenomenal recruit in the list of Antigua prospects, which included Griffin and Cockburn. The No. 71 nationally-ranked recruit, Curbelo will look to be another internationally-born star in Underwood’s short tenure at Illinois.

The 2020 class is rounded out by Hawkins, a 6-foot-10 forward from Antelope, California. The 3-star recruit quickly rose on many prospect boards last fall before committing to Illinois, selecting the Illini over Arizona, Rutgers and San Diego State. Hawkins won’t be expected to contribute right away like the other members of his current recruiting class, but adding forward depth could help the Illini, who will lose Nichols and Samson Oladimeji after this season.

According to 247sports, this is the second-best recruiting class Illinois has had since recruiting classes began being ranked. The current class comes in just behind the 2010 class, which included Jereme Richmond, the highest-rated recruit in Illinois history, and current Miami Heat forward Myers Leonard.

Although it looks as though Illinois will lose two of its top-five players in terms of minutes played after this season, the 2020 class looks primed to continue the rise of Illinois basketball.