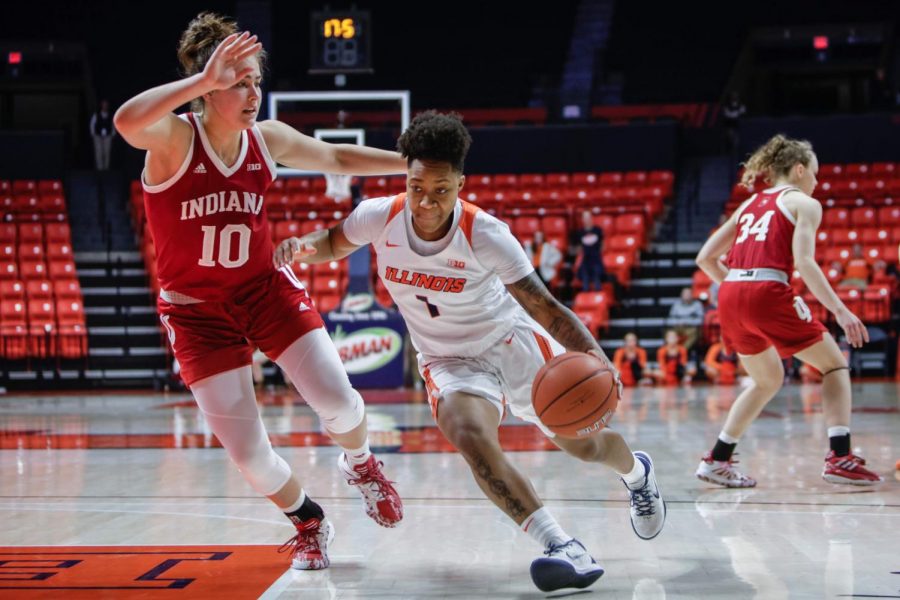 Senior guard Brandi Beasley drives past an Indiana player during the Illini's game against the No. 20-ranked Hoosiers. Illinois fell to Purdue Sunday during Senior Day at the State Farm Center.

The Illinois women’s basketball team lost to the Purdue Boilermakers 70-58 on Senior Day.

“Loyalty, perseverance, resilience, things that when you come to think about what being a fighting Illini means,” Fahey said. “When people win and jump on bandwagons that’s the easy part.  These kids inherited a coach and they all stayed. They stayed loyal to this university, and to this basketball team when it was tough.”

The first quarter was a back and forth affair with six lead changes. Both teams shot well from the field, with Boilermakers making half of their shots and the Illini ended the quarter sinking 46% from the field. Illinois led 16-15 after the first, in large part because the team went 4-6 in three-pointers in the quarter. Joens led the way with six points on 2-3 shooting from the field and the three-point line.

In the second quarter, the Illini struggled to score. Illinois missed its first six shots, and Purdue took an eight-point lead with four minutes left in the half.

The Illini went on a run of their own, cutting the Boilermaker’s lead to just one with 2:50 left in the half. But Purdue responded with two three-pointers and took a 30-25 lead going into the half.

“They went a little bit of zone, so we had to adjust to that, and they really picked up their defensive intensity,” Joens said.

As for the Purdue offense, sophomore guard Kayana Traylor made back-to-back three-pointers to expand Purdue’s lead to 13 points, which allowed the Boilermakers’ posts to get easy looks inside.

Heading into the fourth quarter, the Illini trailed by 14 and were unable to claw their way back in the game. After trying to force Purdue into tough shots and turnovers, Illinois went into full-court pressure.

Purdue beat the defense and found easy baskets in the paint. While the Illini got support from Beasley down the stretch, second-half shooting struggles from the Illini’s leading scorers Holešínská and Joens only compounded the problem and Purdue cruised to the end to claim their 17th win of the season and eighth in conference play.

With the loss, the Illini fall to 11-14 on the season and 2-12 in the Big Ten. Illinois will head to Ann Arbor, Michigan where they’ll face the Michigan Wolverines on Wednesday.