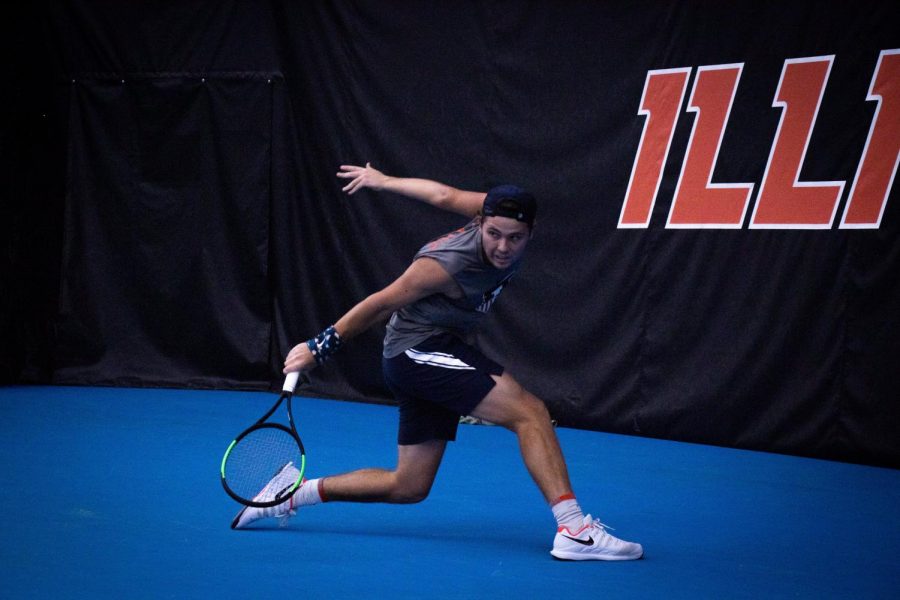 Senor Aleks Kovacevic returns in a match against Notre Dame at the Atkins Tennis Center on Saturday. The Illini will face the Baylor Bears at home on Feb. 29.

The team collected wins in singles and doubles in both meets, including a comeback stretch against Notre Dame highlighted by Illini junior Alex Brown beating the No. 5-ranked singles player Richard Ciamarra.

The last doubles match was left unfinished as the Illini clinched the doubles point with the previous win.

The Illini continued to see success in singles competition. Clark completed a total sweep of his singles opponent Javier Sanchez Pradillo, winning in straight sets, 6-0, 6-0. This was followed by another Illini victory as Bancila again faced Kolaric, where Bancila also won in straight sets, 6-0, 6-2. Last up was Fletcher Scott, who faced Jakub Zamorski, with Scott succeeding in consecutive sets, 6-1, 6-0. This point clinched the meet for the Illini, and the remaining matches went unfinished with a final score of 4-0, Illinois.

The Illini didn’t have a lot of time to rest as they faced the Notre Dame Fighting Irish of the Atlantic Coast Conference hours after the first meet.

The Illini saw a more challenging matchup in the Irish, with Notre Dame junior Axel Nefve and senior Tristan McCormick defeating Brown and senior Aleks Kovacevic 6-3. However, the Illini responded with a tense 7-6 (7-4) victory coming from Horve and Clark, while they defeated Notre Dame senior Guillermo Cabrera and junior Paul Gota. The comeback was not complete, however, as the Illini ground out yet another close victory at the hands of redshirt junior Gui Gomes and sophomore Siphosothando Montsi, where they defeated Notre Dame’s Ciamarra and senior Matt Gamble in a nail-biting 7-6 (14-12) win, which gave the doubles point to the Illini.

“Gui and (Siphosothando) did just a phenomenal job of fighting back, fighting back,” Dancer said, per Illinois Athletics. “They saved two match points in the one game and came back to save a couple more in the tiebreaker. Lucas and Zeke, we made a small tactical adjustment that helped them get back in their match, so good composure from them to make that adjustment.”

The Illini continued their strong performance into singles play as the home team saw a 4-2 victory in singles competition, leaving the final results of the meet at 5-2. The comeback saw Brown’s match-clinching victory over Ciamarra, 6-3, 3-6, 6-3.

Dancer commended the players on both teams following the match.

“We had three First Team All-Big Ten guys who went out and did the job today,” Dancer said. “That was awesome for them to step up against great competition. Notre Dame, we’ve got a ton of respect for those guys.”

The Illini look forward to a short hiatus, next facing the Baylor Bears at home on Feb. 29.