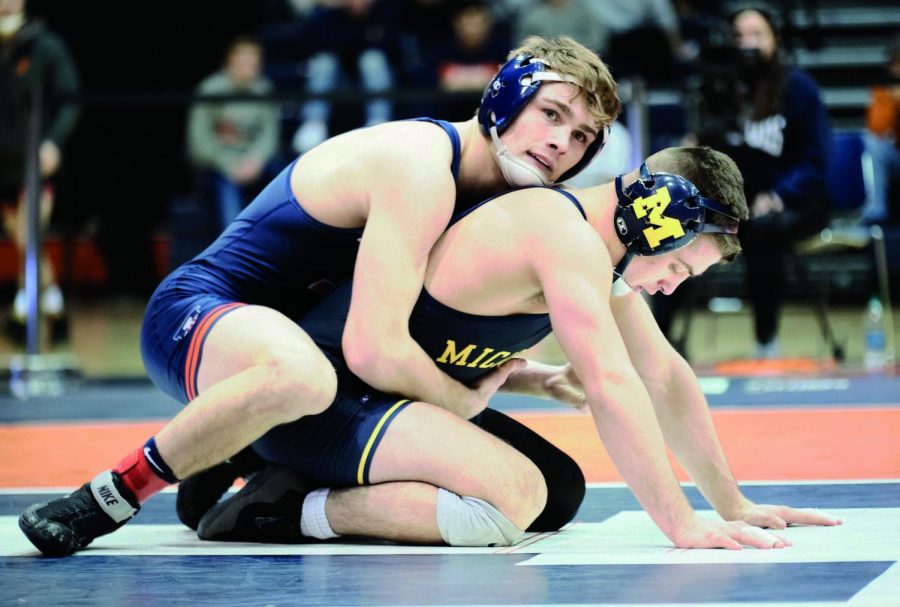 “Our seniors are amazing,” Danny Braunagel said. “They’ve given so much to this program.”

Cardani started the team off with the first win of the night, not giving up a single point against his opponent, sophomore Jeremy Trinh. He began the first period with a takedown that then led into a 4-point near fall. In the second, Cardani started on the bottom and scored a reversal to bring the score to 9-0. The third period then saw Cardani holding Trinh down the entire match to end with an 11-0 major decision victory.

Piotrowski was able to score a takedown in the first period against his opponent, freshman Lawrence Saenz. In the second period, Piotrowski started in the bottom position and was able to escape to earn another point. He then scored another takedown and an escape point in the third to finish with a score of 6-4.

Barone had a win over No. 14 sophomore Jacob Wright at 157 pounds. In the first period, Barone put pressure on Wright and got a takedown, pushing through Wright’s defense. In the second,Wright earned an escape point, bringing the score to 2-2 entering the third. Barone started in the bottom position and was able to earn an escape point and a takedown as well in the final seconds to cement his 5-2 decision victory.

Danny Braunagel began his match with two successive takedowns in the first period against freshman Adam Kemp. In the second period, he started in the bottom position and earned a point for escaping. Another point was awarded to Braunagel for his opponent’s stalling, ending the match as an 8-3 decision victory.

Zac Braunagel racked up a tremendous amount of points against his opponent, No. 32 freshman Hunter Cruz. Zac Braunagel began with two takedowns in the first, and followed up with three in the second, setting the score at 11-3 before the third round had begun. He proceeded to earn two more takedowns and a 2-point near fall. The final score was 18-5 for a major decision.

“It was more special today to wrestle in front of a great crowd with the great alumni here who have kind of given Illinois the tradition that it’s known for,” Zac Braunagel said. “It was fun and it was a pretty memorable day.”

Wroblewski faced off against junior Isaiah Perez and began his match two takedowns going into the second. He then was able to score another takedown before the third and ended the match with an escape as well as a final takedown. The result was a 10-6 decision win.