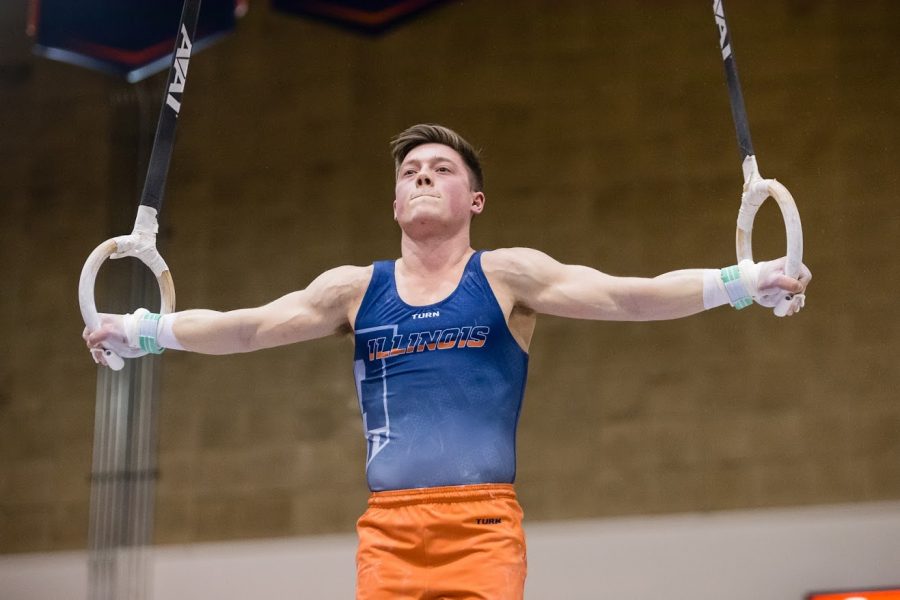 Alex Diab holds steady while competing in the still rings event. Fellow Illini Jordan Kovach was injured on Day One of the Winter Cup Challenge and unable to compete, but, Diab took home the still rings title.

Illinois gymnasts Jordan Kovach and Alex Diab competed as individuals last weekend when they competed in the USA Gymnastics Winter Cup Challenge in Las Vegas. The duo experienced mixed success; Kovach was injured on Day One during his vault landing and was unable to complete the all-around event he was competing in. Diab, on the other hand, won the still rings title, adding another title to an already accomplished gymnastics career.

“It feels good. It’s been my goal to be a Winter Cup champion,” Diab said. “I actually did a new ring routine and dismount. It was the first time I competed with it, and it went well. I had a good performance.”

In addition to still rings, Diab also competed on floor exercise, vault and high bar, placing in the top 20 on all of these events.

“I just wanted to go in and have good performances on all four of my events,” Diab said. “I did that both days, so I’m happy with it.”

By qualifying for Day Two of the Winter Cup Challenge, Diab qualified for the 2020 U.S. Men’s Gymnastics Championship, which will be held this June in Fort Worth, Texas. Diab has no competitions scheduled between now and then, and he intends to use the time to refine his routines and add skills to increase their difficulty, which increases the score.

Kovach, meanwhile, did not fare as well as his teammate. He was supposed to compete in all six events but only completed five of them. On vault, his third event, he landed awkwardly and hyperextended his knees.

“It hurt pretty bad. I just laid on the vault mat for a little bit, and I had to get walked off to the training area,” Kovach said. “They were super locked. I couldn’t really bend them.”

After being treated by athletic trainers, Kovach was able to go back out and compete on parallel bars and high bar, but his knees started to lock up again, preventing him from competing on the floor exercise.

“He’s a fighter,” said head coach Justin Spring, who was in Las Vegas with Kovach and Diab. “But when you injure your leg, it’s hard to do the landings.”

Kovach is scheduled for an MRI on Thursday and will learn the results the same day.

“We think it’s just tight, but we want to rule out all other things and make sure he’s good to go,” Spring said.

While Kovach and Diab were competing in Las Vegas, associate head coach Daniel Ribiero ran the rest of the gymnastics team through two consecutive days of all-around competition to simulate the NCAA national championship.

“We had a rough Day One, but Day Two was much better. We had some guys really step up,” Spring said. “That was exciting, but not having a good Day One is a little concerning. It’s all about consistency as far as I’m concerned, and I was a little upset with our lack of consistency.”

Illinois resumes team competition this weekend with a road match against Iowa, the most consistent team in the Big Ten, according to Spring.

“If we open the door up by having a fall here or there, we’re going to get beat,” Spring said. “They’re not going to do that. They’ve been very consistent. We got to really make sure that we set routines in the lineup that are going to hit.”