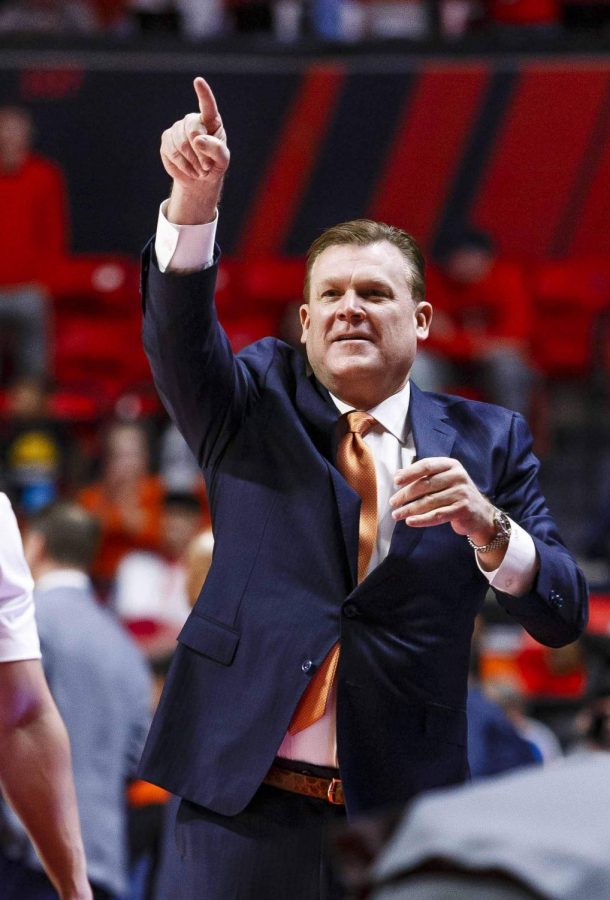 Head Illinois men’s basketball coach Brad Underwood and his coaching staff earned contract extensions through 2026 and 2022, respectively, Illinois Director of Athletics Josh Whitman announced Monday afternoon. The extensions are pending approval by the UI Board of Trustees, which will meet next to discuss the agreements on March 12.

The announcement to lengthen Underwood and co.’s tenure with the men’s basketball program follows the team’s 67-66 win over Indiana at home Sunday and a jump back into the Associated Press rankings at No. 23.

Underwood, who’s in his third season at the helm of the program, previously agreed to a six-year contract with Illinois in 2017 which would have secured his tenure until 2023. However, with the new arrangements, Underwood is set to lead the program until 2026. The rest of the men’s basketball coaching staff will anticipate contract continuations into 2022, according to Illinois’ Department of Intercollegiate Athletics.

“I am extremely pleased with the upward trajectory of our Fighting Illini men’s basketball program and believe we are headed toward a championship future,” Whitman said, per Illinois Athletics. “Under Coach Underwood’s leadership, our student-athletes have showed steady progress on the court and in the classroom. He has instilled a culture based on competitiveness, toughness, preparation, and accountability that is yielding exciting results. His ability to project a vision for the program’s future, to recruit elite players to Champaign-Urbana, and to develop them into a winning team has exceeded even my admittedly high expectations at this relatively early stage in his tenure. Perhaps most importantly, I have enjoyed seeing the bonds formed between players and players and players and coaches, all of whom care deeply about one another, who are committed to their collective successes, and who support each other, on the court and off, in victory and defeat.”

The Department of Intercollegiate Athletics also announced that the salary pool for on-court assistant coaches will increase by more than 25%.

“I am grateful to Brad and Susan for joining our Fighting Illini family, and we look forward to many future years of their leadership, friendship, and engagement here at the University of Illinois,” Whitman said, per Illinois Athletics. “I am also appreciative of our assistant coaching staff and the many talented, dedicated members of our support staff who have worked tirelessly to advance our men’s basketball program. We are happy to build stability within our staff and believe it will yield even greater coming success.”

Underwood has an overall record of 46-48, so far, and amassed a record of 23-33 in Big Ten play during his three years as head coach for Illinois.

According to the Department of Intercollegiate Athletics, Underwood’s updated contract increases his base salary to $3.4 million and includes annual increases that will inflate his salary to $4 million by the final year of his proposed extension in the 2025-26 season. If Underwood stays with Illinois through the final year of his extension, he could earn a $750,000 retention bonus; however, if he leaves the program for a new coaching position, he owes Illinois an $8 million buyout which will decrease yearly until the agreement expires. Underwood’s contract also leaves room for additional extensions each time Illinois appears in the NCAA tournament from 2022 to 2025. He also has the potential to extend his contract through 2030 on the same terms.

“Serving as head coach at the University of Illinois is a professional dream come true,” Underwood said. “I am honored to be one part of what is a collective effort in working to get Illinois Basketball where it needs to be. Building a program is hard work; there are no short cuts. But I am excited by the growth we’ve seen. We are gaining momentum and continuing to climb that mountain.

“The credit goes to our players,” Underwood said, per Illinois Athletics. “As a coach, I always have a mindset toward that locker room and those wearing the jersey. We have high-character young men who work hard in the classroom, give everything they have when it comes to basketball, and are doing things the right way off the court. I am proud of our players; they truly are Every Day Guys. I am a relationships-driven person, and I cannot express enough how grateful I am for Josh’s leadership and unwavering support of our program. He is relentless in his efforts to provide us the resources we need to push forward. His love for the University of Illinois and vision for Illinois Athletics is the perfect match for me and the drive I have as a head coach.”

Underwood was hired as head coach for Illinois in 2017, following head coaching terms at Oklahoma State and Stephen F. Austin, where he earned records of 20-13 and 89-14 in one and three years each programs, respectively.

“I also want to recognize our assistant coaches and entire staff, all of whom have worked around the clock during my tenure and will continue to do so every single day moving forward,” Underwood said, per Illinois Athletics. “They share my passion for the game of basketball and desire to help young people succeed. The visibility and tradition of Fighting Illini Basketball is unrivaled. It’s why I wanted this job three years ago, and why I am humbled and proud to continue serving in this chair for many years to come. On behalf of my wife Susan and our family, we thank Illini Nation and the Champaign-Urbana community for making this home. Illinois truly is a special place.”