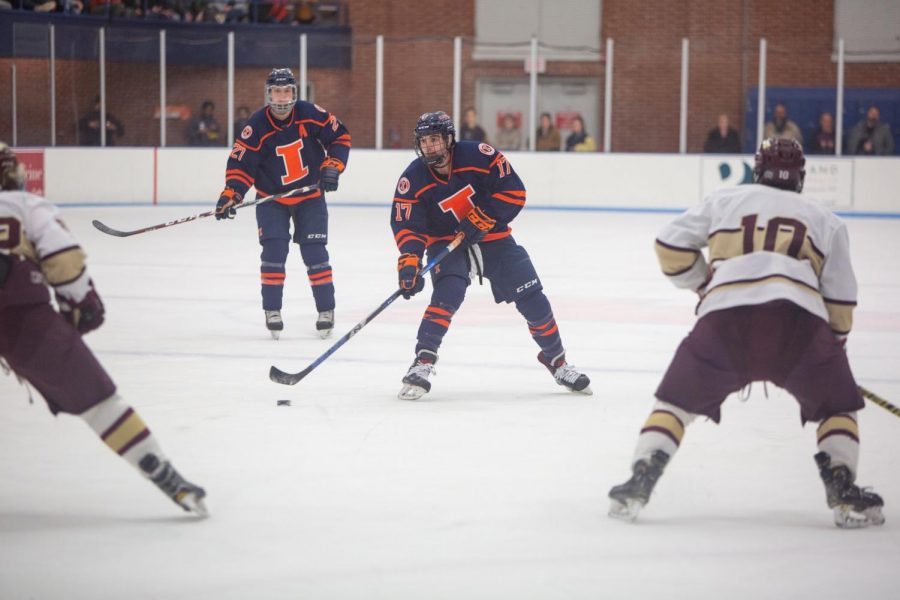 Senior Forward Jon Moskaluk advances the puck down the rink as two defenders move to intercept him during the match against Robert Morris University on Feb. 29

The tournament kicked off on Friday with a game between Iowa State and Robert Morris Unversity. Iowa State easily took care of Robert Morris with a 6-1 victory. Although this game didn’t have much drama, the players’ intensity made it clear this is the last hockey game some seniors will play.

Iowa State had a quick turnaround and had to be ready to play top-ranked Lindenwood at 4 p.m. on Saturday. The game couldn’t have been more different than the first Iowa State played.

It was clear both teams weren’t going to go away easily, and regulation time ended in a 4-4 tie. The game then went into overtime. One of the rule changes for playoff hockey was getting rid of shoot-outs, so the teams continued to play 20-minute sudden death overtime until one of the teams scored.

Iowa State and Lindenwood headed out for the first overtime, then the second, then the third, then the fourth, and by the fifth overtime, Lindenwood scored the goal that ended the game with a 5-4 victory.

After a game that took a total of around six and a half hours, Illinois and Ohio were finally able to get onto the ice.

The puck eventually dropped at 11:55 p.m. after a scheduled 7:30 p.m. start time. Even though the teams had to spend hours waiting around for the previous game to finish, they were ready to go when the time came.

Although many of the fans ended up leaving, the Illini rewarded those who stayed to watch with a great performance. The game was a stalemate for the first two periods, with both teams playing with peak fundamental scoring chances. The second period ended in a 0-0 tie.

The first goal of this game came around 1:45 a.m., and the Illini were able to take a 1-0 lead with a goal from Kacper Ryba. He followed that goal up with another goal less than a minute later.

Thanks to all the overtime in the first game and daylight savings time, at the end of the third period, the clock read 3:19 a.m., with Illinois taking a 2-0 win over Ohio. Illinois went on to play Lindenwood in the championship game at 1 p.m. later the same day.

Heading into the championship, both Illinois and Lindenwood had to face adversity from previous games. Lindenwood played the equivalent of more than two games in their matchup with Iowa State, and Illinois players were on the ice till 3 a.m.

The game didn’t go the way Illinois was hoping, as they dropped the game 5-0 to top-seeded Lindenwood. The game was played closer than the score read, but it wasn’t the ending Illini fans were hoping for.

Even though this was the last time for the seniors to play on their home ice, it won’t be their last chance to raise a banner. The team will head down to Texas over spring break to play in the ACHA National Tournament. The first game will take place on March 21 at 8:30 p.m. against Arizona.