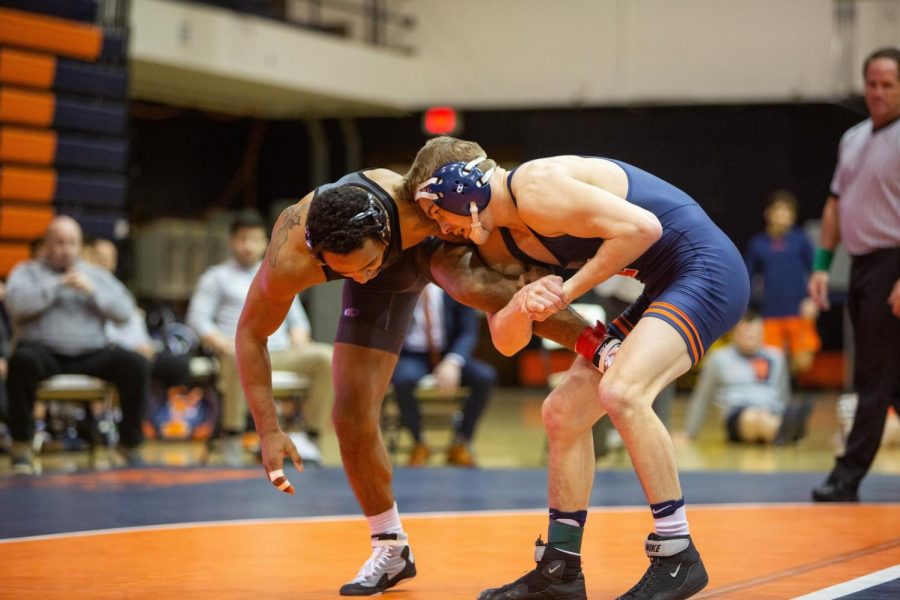 Senior Travis Piotrowski grabs the leg of a Purdue opponent during a meet on Feb. 16 at Huff Hall. Last weekend, Piotrowski qualified for the NCAA Championships after a fifth-place finish at the Big Ten Tournament.

The Illinois wrestling team competed in the Big Ten Championships last weekend, finishing 11th overall and scoring a total of 49 points in the tournament.

Redshirt freshman Justin Cardani didn’t give up a single point against Maryland’s Brandon Cray in his first match of the tournament, scoring a 4-0 decision. He earned an at-large bid to the NCAA Championships on Tuesday after not earning one in the Big Ten Championships.

Senior Travis Piotrowski won his first match of the tournament and followed up with another victory against Minnesota’s Boo Dryden with a score of 7-2. His next opponent was Joey Silva from Michigan, and Piotrowski won again with a score of 5-2. Rutger’s Sammy Alvarez was the final opponent for Piotrowski, and the match went to sudden victory before he took Alvarez down and finished at fifth place in the Big Ten. Piotrowski also qualified for the NCAA Championships.

Redshirt junior Dylan Duncan beat his first opponent of the tournament and went on to defeat Michigan’s Cole Matten in a 7-5 decision victory. He finished seventh, scoring a 3-1 decision against Purdue’s Parker Filius. His performances qualified him for a spot at the NCAA Championships.

Redshirt senior Eric Barone won against Iowa’s No. 6 Kaleb Young, scoring a first-period takedown and keeping his lead until the match ended as a 3-1 decision in favor of Barone. He defeated Wisconsin’s Garret Model with a 6-3 decision. Barone finished the tournament with a fourth-place finish and will also be competing in the NCAA Championships.

Redshirt senior Joey Gunther won his first match at 174 pounds. He also secured another victory over Philip Spadafora from Maryland, placing eighth in the tournament. He will be heading into his fourth NCAA Championships.

Redshirt freshman Zac Braunagel wrestled against No. 21 Jelani Embree from Michigan, earning a 3-2 decision victory. He defeated No. 19 Owen Webster from Minnesota and Billy Janzer from Rutgers.

Freshman Luke Luffman went up against Purdue’s Thomas Penola in his first bout of the evening and scored a 7-2 decision victory. He finished the tournament in eighth place.

Heading into the end of the season, head coach Jim Heffernan said he believes each athlete has shown determination and character throughout the season.

“They’ve done a great job,” Heffernan said. “They’ve worked hard and have done everything we have asked of them.”

The 2020 NCAA Championships will take place from March 19-21st in Minneapolis, Minnesota. Out of the seven Illini wrestlers competing in the competition, two will be redshirt seniors, three redshirt freshmen, one a true senior and one redshirt junior.