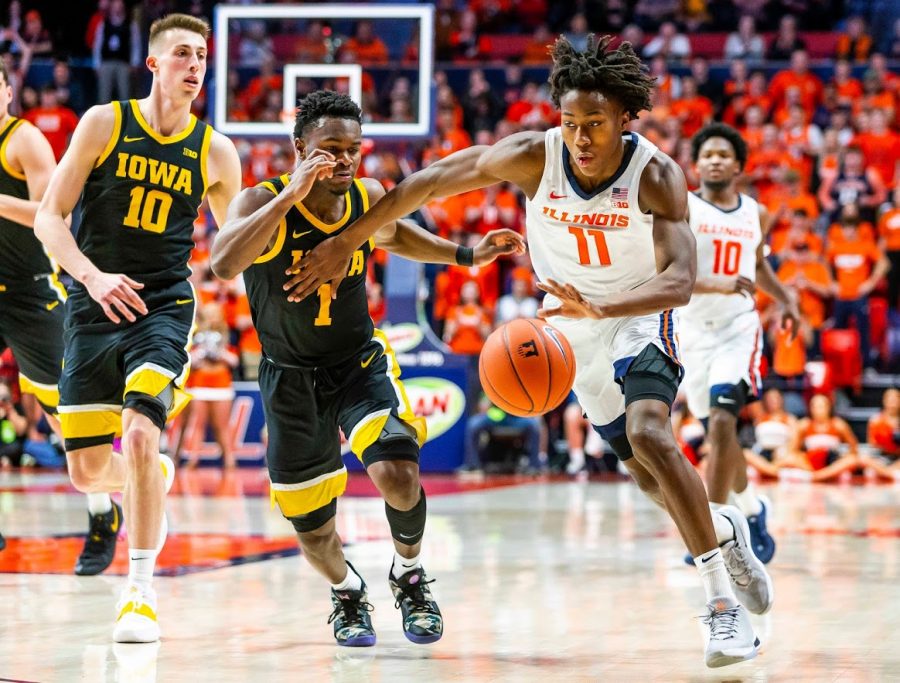 Sophomore guard Ayo Dosunmu speeds around two defenders during the match against Iowa on March 8. The Illini won the match 78-76.

Illinois basketball was primed to make a memorable run in this year’s Big Ten and NCAA tournaments. After a six-year tournament drought, Illinois, led by sophomore Ayo Dosunmu and freshman Kofi Cockburn, stole the hearts of Champaign and Urbana, putting together a 21-10 season behind stout defensive play and clutch shots.

Due to the season ending early due to COVID-19, imagination is the only thing Illinois fans have left. But basketball is far from the only sport Illini fans lost during this pandemic. Let’s take a look at the some of the top Illinois sports moments since the beginning of the new decade.

When Garrett Acton turned down the Chicago White Sox in the 2016 MLB Draft, he took a gamble on himself, believing an investment in college would vault him even higher in the eyes of the scouts and organizations. It appears his decision will work out.

After short stints at Saint Louis and Parkland Community College, Acton came to Illinois and has shut down opposing batters ever since.

In the series finale against Elon on March 8, Acton completed a six-out save to give the Illini an 8-7 victory and him the career saves record at 25, cementing his status in the program’s record books.

Illinois traveled up to Ann Arbor to take on a reeling Michigan team desperate for a victory. With Big Ten road victories being as rare as they were this season, Vegas listed the Illini as a 4.5 point underdog to the team they beat in December. Ayo and company didn’t seem to mind, though.

In perhaps Dosunmu’s best game to date, Illinois played clean and efficiently, taking a 34-30 halftime lead. The Wolverines woke up in the second half, eventually taking a 2-point lead with only minutes left. A pair of Trent Fraizer free throws and a missed Jon Teske basket gave Illinois the chance to recoup and, worst case, get ready for overtime. Ayo had other plans, though.

With seconds remaining, Dosunmu was able to use his length to get a mid-range jumper off against Zavier Simpson, nailing the shot with 0.5 seconds left to take the 64-62 lead. The Wolverines’ half-court prayer was no good, and the Illini finished the season sweep over Michigan behind another showing of Ayo’s late-game heroics and a season-high 27-point outing from the sophomore.

While the Illinois wrestling program doesn’t have the glitz and glamour of other Big Ten powerhouses like Iowa and Nebraska, it’s hard to argue that they aren’t on the rise. After a successful regular season, finishing 10-4 on the year with victories over four ranked teams, seven wrestlers were selected to compete in the NCAA Tournament.

Travis Piotrowski, Danny Braunagel, Zac Braunagel, Joey Gunther, Dylan Duncan, Justin Cardani and Eric Barone rounded out the squad that planned to go up to Minneapolis to compete for the championship against the nation’s best. Unfortunately, the COVID-19 pandemic took away the opportunity for these men, but the journey to get invited will always be remembered.

The redshirt senior continued to lead the Illini to success, winning the Big Ten Indoor Championship in long jump. This isn’t the first time the Academic All-Big Ten athlete has found success on the championship level, winning the High Jump title in both 2017 and 2018. After redshirting for a season, Wells came back stronger than ever, winning this year’s long jump title with a jump of 7.65 meters. Wells is the first athlete in Illinois history to win Big Ten Championships in both the long and high jump, showing off his versatility.

Prior to this season, Illinois had been trending down as a Big Ten program, let alone nationally. A loss to Ohio State ended their Big Ten title hopes, but with an NCAA tournament bid already locked up after a six-year absence, the Illini still had plenty to play for: a double-bye in the Big Ten Tournament. But first, the Illini had to get past their budding rival, the Iowa Hawkeyes, who knocked them off the month before in an emotional affair.

The Hawkeyes came out hot, nailing three-pointers and taking an early ten-point lead. The Illini, though, woke up and played lights out, taking a 16-point advantage with 10:43 left in the game. All-American Luka Garza and the Hawkeyes didn’t back down and cut the lead to two points with 18 seconds left. Illinois missed the subsequent free throws that could have iced the game, and the Hawkeyes had the chance to tie or take the lead.

Everyone in the stands knew Garza was getting the last shot. Freshman Kofi Cockburn knew, too. With one second left, Garza and the ball were met by Cockburn, who stuffed the Big Ten Player of the Year’s shot as the time ran out, securing a 78-76 victory for the Illini, cementing the team’s status as a top-tier Big Ten program.

Men Gymnastics Team’s Tri-Meet victory over No. 2 Michigan and No. 8 Penn State

After an incredibly rare tie against Iowa the week before, seniors Michael Paradise and Danny Graham led the way for Illinois, each earning an event title on the pommel horse and the rings to pull away from Michigan and Penn State on Senior Day. The victory improved the Illini to 5-0 at Huff Hall on the season and 8-3-1 overall.

Trent Frazier took control of the final 20 seconds of the first half, nailing a three-pointer to break the 31-31 tie before heaving a three-quarter court shot that went in to push the advantage to 37-31. With the crowd going wild, the Illini took that momentum to pull away from the Cornhuskers in the second half, winning 71-59.

Illinois Women’s Basketball Knocks off Penn State on the road

After letting a seven-point lead after three quarters slip away, Illinois recouped behind the outstanding play of redshirt junior Petra Holešínská, who capped off her career day by scoring the final five points of the game, giving the Illini a rare 70-66 road victory. It was their first Big Ten road victory since upsetting No. 12 Minnesota in January 2019.

Behind the golden arms of sophomores Sidney Sickels and Addy Jarvis, the Illini shut down opposing offenses, holding them to a combined seven runs in four games to start the year 4-0 and finish the NCFA Leadoff Classic undefeated. Sickels shined especially, finishing the classic with 15 ⅔ scoreless innings. The Illini beat two ranked teams that weekend: No. 21 Ole Miss and No. 23 Auburn.

Illinois Baseball Wakes Up to Knock Off Two Ranked Teams

After getting routed by Wake Forest and Western Carolina the week before, Illinois came out hungry and ready for their three-game series in Frisco, Texas, knocking off No. 13 Texas A&M and No. 23 Oklahoma State, 1-0 and 4-2, respectively, to revitalize the team. The Illini won three out of four games following the Classic.