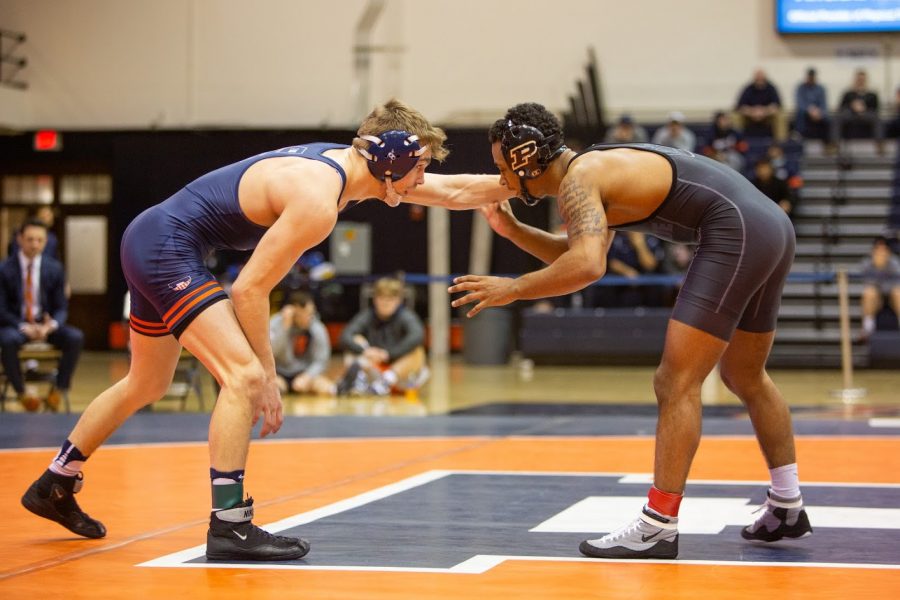 Senior Travis Piotrowski grabs at a Purdue opponent’s shoulder during the Illinois’ dual against Purdue at Huff Hall on Feb. 16.

Senior Travis Piotrowski was in class on a Thursday when he got a text from head coach Jim Heffernan calling the team in for a meeting. After he got the text, he could not sit still; he knew what was going to happen. At that point, because of COVID-19, the NCAA had already taken multiple steps to reduce the amount of people at the NCAA Wrestling Championship, including greatly limiting fan access to the event.

The only step after that was the one nobody wanted: a complete cancellation of the tournament.

“We were all saying ‘yeah, I’d be okay with (not having fans attend the tournament), as long as we still get to wrestle,’” Piotrowski said about the discussion between the Illinois qualifiers before the cancellation. “Like that was the biggest concern with all of us is that we just wanted to go out there and wrestle.”

Looking up at the walls in the wrestling room, located on the top floor of Huff Hall, you can see past Illinois wrestlers who all got their opportunity to compete on the national stage. That day, the eight wrestlers who had qualified for the national tournament, including three seniors, found out they would not be able to get that same opportunity in 2020.

By the time the wrestlers met for the team meeting, around 4 p.m., news already started leaking that the NCAA would follow what some other professional sports leagues had already done by that time and suspend athletic activities. All that was left to do was for the coaching staff to tell the wrestlers and make it a reality.

“In those situations, your parental instincts kind of take over,” Heffernan said. “I kind of felt like I did as a father where you have a young child who’s sick, and they’re hurting, and you wish you could take that pain out of them and carry the burden for them. That’s how I felt looking into those guys’ eyes telling them (the tournament) wasn’t going to happen next week.”

Heffernan didn’t get to see his successful season come to a proper end. But, for him it wasn’t about his season — it never is — it’s about the wrestlers’ season. Heffernan has been around the sport for his whole life and has participated in numerous national tournaments. He knows he’s had more than his fair share of national tournament experience, which is not the same for his young group of athletes.

Usually, the wrestling room in Huff Hall has music playing and people talking. The energy was different after the announcement.

“It was probably as quiet as the wrestling room has ever been,” Piotrowski said. “There were no words really to describe how anybody was feeling, it sucked. We got the news, it hit a little bit and we were all just quiet.”

Just like that, Piotrowski’s most winning season as an Illini was over, before he got the chance to even compete in this year’s national tournament. This season Piotrowski won 27 matches, lost only four times, went undefeated in dual meets and reached as high a ranking as No. 5 nationally. Piotrowski pinned Rutgers’ Sammy Alvarez, for the second time this season, in the Big Ten Tournament to secure fifth place and his spot in the NCAA Tournament.

Piotrowski did not know that would be his last time wrestling for the 2020 season, but now it is a match he says he looks back to often.

A few days after the news broke about the tournament being canceled, Heffernan sent the seniors another text. This text asked the question of if the seniors were given another season of eligibility, would they return.

This question was basically hypothetical, because while the NCAA has already offered eligibility relief for Division-I spring sports, an announcement about the eligibility of athletes of winter sports whose last outings were canceled, like basketball and wrestling, has yet to be given. However, it does give a little hope to wrestlers like Piotrowski who would love another chance.

Everything is still up in the air, but the chance for the seniors who qualified for nationals to get another shot at it leaves hope for them to finish their own athletic career and not have it be ended by the coronavirus.

While that is a chance for Piotrowski, it isn’t the same for all the seniors. Redshirt senior Eric Barone will not be able to take the opportunity of another season, even if the NCAA gives it to him.

“For me, it is definitely over. There is nothing I really can do about it.” Barone said. “I already graduated last year. I am already going to finish my master’s program this year and I have a job I’m starting this July. I already signed the contract and everything. It’s over for me, I have nothing to go back to school for, so I’m not going to go get a degree that doesn’t mean anything or spend money going to school for nothing. I already have a job, the next part of my life starts this summer.”

Barone was a representation of how unpredictable a tournament atmosphere can be. He had a down year this season, going only 12-11, but he showed up in the Big Ten Tournament.

“I hadn’t had the best year, but I kept telling myself that all that matters is that I get to that national tournament, and I prove myself at the national tournament,” Barone said. “At the end of the day, 10 years, 15 years down the line, the only thing people remember really is how you wrestle in those three days in March, and how you finish the season,”

Barone took his opportunity and ran with it in the Big Ten Tournament, but he won’t have that same chance in nationals. No one will.

This isn’t the ending Barone imagined, not only for himself but for every person that has helped him build toward his goal of being an All-American. Barone’s first phone calls he made after hearing the news were to his parents and then to his high school coach. He wanted to let them know how much he appreciated the sacrifices they made to push him towards his goal, a goal Barone believes he would’ve accomplished after his successful run in the Big Ten Tournament.

This was a stark ending to a great season for Illinois. The Illini won 10 dual meets this year as a team, eclipsing the double-digit dual-win mark for the first time since the 2015-16 season. The team was led by its four senior starters, Piotrowski, Barone, Joey Gunther and Mousa Jodeh. It was also fueled by its young talent, starting three redshirt freshmen and a true freshman the entire year.

For the whole season, the seniors have been able to give knowledge to the younger wrestlers. They helped them through tournaments and duals, giving them advice and helping them through their first year competing for an entire college season.

Piotrowski and redshirt freshman Justin Cardani highlight those connections, as their relationship goes back years. When Piotrowski was a freshman at Illinois, he remembers wrestling Cardani during Illinois-hosted wrestling camps which were frequented by Cardani, a Champaign native.

“I actually just saw a video of how skinny he was and how small he was (during those camps),” Piotrowski said. “You can actually see his progression of how big he’s gotten given how small he is already. Even just with working with him, his work ethic hasn’t changed, it hasn’t slowed. It’s always ‘I want to do more, I want to do this, I want to do that, I want to get better.’”

The experience they had together at the camps came full circle during the 2018-19 season when Cardani redshirted behind Piotrowski in the 125 lb. weight class.

Through the last two seasons, Piotrowski worked with Cardani on not only the physical aspects of the sport but also the mental aspects of being a student-athlete, including a tight traveling schedule and having to compete at places like Penn State.

For the entire season the seniors were able to help younger wrestlers. However, after the tournament was canceled, it was the freshmen who were there comforting the seniors. The underclassmen knew, unlike the seniors, they would have more opportunities.

“For something like this to happen, it’s crazy to see how the roles have almost switched,” Piotrowski said. “Where all of the sudden, the seniors aren’t as involved anymore but it’s the underclassmen, the guys that are still in the starting lineup, that are comforting us. They’re like ‘you guys have had our back this whole season, we got your back now.’”

The future of the program is bright, but the present is bleak and final. While it’s hard to look at any positives that might come from the cancellation, Heffernan thinks it’s good that after the cancellation, the seniors and other qualifiers only had one day of class before going home for spring break.

The athletes were able to go back home for a week, and now that classes have transitioned online for the remainder of the semester, the wrestlers who have had their chance taken away can be home around family and friends.

“Having that family support, going home to family and friends and everything was a big deal,” Heffernan said. “Even though you’re these tough college athletes, especially in our sport, I know they’re kind of known for being tough, hard-minded guys. You still need your mother and father and brothers and sisters and friends to get through things like this.”