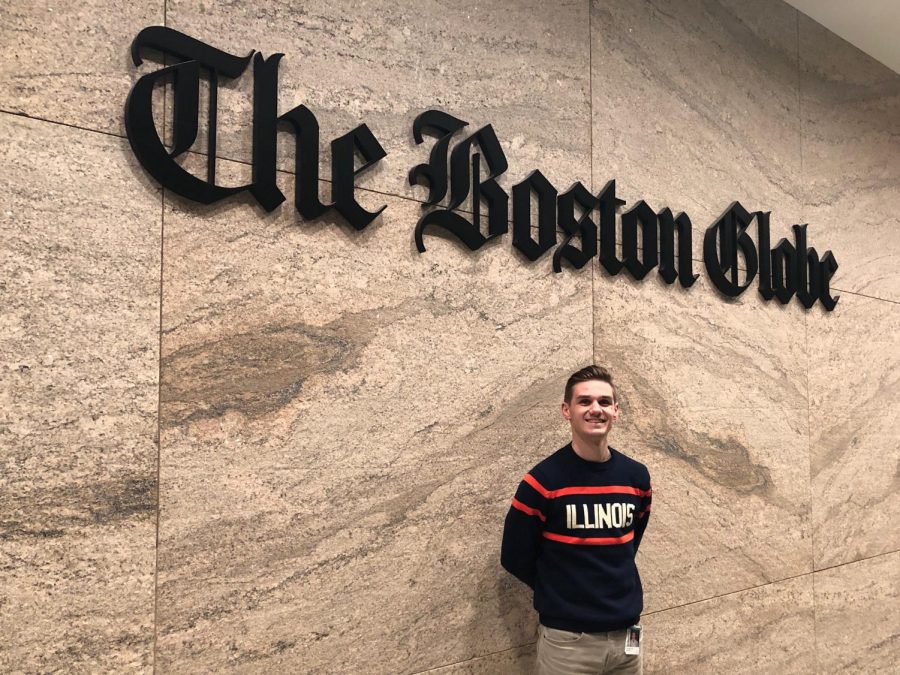 Peter Bailey-Wells stands in front of the Boston Globe Sign.

Teams, coaches and players at every level of sports have used the phrase “this is bigger than sports” over the past two weeks while COVID-19 has forced cancellations of sports nationwide.

March Madness, Spring Training or Olympic trials seem minuscule, and are, when the world is facing a pandemic. But just like other industries, the sports world has been left with questions and confusion. Sports journalists and journalists in general are not immune to that confusion.

But the show must go on. People need to get paid, news and sports outlets need content and the job of journalists is more important than ever.

“This has been as busy as it’s been,” said University of Illinois and Daily Illini alumnus Peter Bailey-Wells. “Even though most of us are at home, the pace has been furious. I haven’t really looked at the full scope of the numbers because it’s not really my job to measure website traffic, but I do believe this is one of the biggest, if not the biggest, traffic week in The (Boston) Globe’s history. That’s kind of representative of how it’s been.”

Bailey-Wells, a multiplatform editor for The Boston Globe’s Express Desk, said the most difficult part of the job right now is the lack of predictability, which will most likely continue for the foreseeable future. However, predictions are something Bailey-Wells has steered clear of.

Focusing on that can get difficult as journalists rely on being ahead of this fluid situation and aren’t exempt from the changes this crisis has brought.

Alex Iniguez, an alumnus of the University of Illinois and The Daily Illini, has first-hand experience with the rapid changes occurring. Iniguez works as an assistant sports editor at The Seattle Times but has found a new role at the paper amidst the pandemic. When the news department asked to pull some workers from the sports desk, Iniguez didn’t hesitate to volunteer.

“I jumped at that as a chance to broaden what I work on and learn some new things,” Iniguez said, “and help out a department that is running on fumes with no end in sight.”

With a new job as editor of acts of kindness stories surrounding coronavirus, Iniguez has been able to step back from sports and focus on the needs of the surrounding communities.

“Our local staff is really working on the local impact, the business impact, the personal impact and trying to as clearly and simply as possible,” Iniguez said. “Stuff can be really confusing, and people are getting different messages so we’re really trying to fill the role of, everyday in our communities, here’s what you need to do to get by. That’s really our role right now. My role specifically with this act of kindness stuff is to uplift and find the good in a sea of bad. We try to connect to actual people in our communities.”

Other sports journalists like Will Leitch and Charlotte Carroll, fellow University of Illinois and The Daily Illini alumni, can’t put the sports world on pause.

Leitch, who works for various news outlets, including New York Magazine and MLB.com, has continued somewhat usual work as many of these stories are right in his wheelhouse, as connecting sports to the rest of the world has always been his job.

“I’ve been keeping very busy, because a large part of my beat is generally about the intersection of the sports world and the outside world,” Leitch said. “It would be a lot harder for me if I had to write about how baseball players are rehabbing from injuries or how their workouts are going. Beat reporters, I think, are having a harder time with it because they are so specifically focused on a sport and specifically focused on the day to day and daily updates you’re not getting now.”

Carroll is a beat writer for The Athletic, covering University of Connecticut men’s and women’s basketball along with the WNBA’s Connecticut Sun. She was hours away from covering the men’s AAC tournament when news broke of tournaments around the country being canceled.

The first step was to get back home and get in touch with her editors but now it’s back to work.

“Now it’s really pivoted to off-season coverage and just more long-term evergreen feature ideas that have been in the back of my head for a long time in recruiting type of coverage and season review as well,” Carroll said. “This just gives us more time to work on those things minus than the actual events and getting out there. It’s kind of a negative view that you don’t have those events, but it’s nice to sit back and pause a little bit to see what you really want to work on.”

While Leitch and Carroll are being forced to get more creative and expand outside of the box, they don’t mind because it provides a temporary distraction from the current chaos the country is experiencing.

With health and safety as a worldwide concern, sports can’t be a uniting platform that fixes or repairs society. They can, however, be an outlet and provide a temporary sense of comfort.

“Looking at Twitter and the news is really depressing right now,” Carroll said. “It’s really nice to be able to turn to quality sports articles and quality content that yes, they might not be about a game or a tournament, but they’re still existing.”

While sports, even in their absence, will continue to impact society, Leitch, Carroll and Iniguez know sports take a lesser role right now. No matter the circumstance, they all have the same goal to provide the public with correct information.

For Leitch, that is writing about why UFC commissioner Dana White was slow to cancel events after every other sports league had. For Carroll, that is providing insight into UConn women’s basketball player Megan Walker’s WNBA draft decision. And for Iniguez, that is shining a bright spot on a Seattle community who is setting up teddy bears in windows for preschoolers to have a teddy bear hunt.