Stephens gets second chance at Olympics 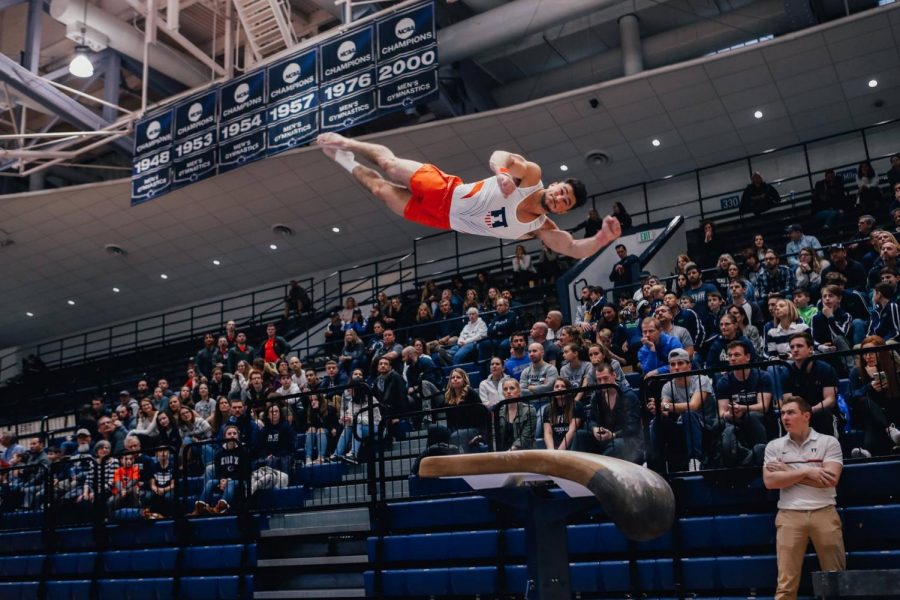 Sophomore Clay Stephens competes in the Vault event during a match against Penn State on March 16, 2019.

Sophomore gymnast Clay Stephens has dreamed of representing his native Australia in the Olympics since he was five years old. This year, Stephens finally had a chance to fulfill that dream by qualifying for the 2020 Summer Olympics in Tokyo, but his hopes seemingly ended on Feb. 20 when he suffered a disastrous injury to his left knee while competing in the 2020 FIG World Cup Series in Melbourne, Australia.

However, Stephens’ hopes were unexpectedly revived when the International Olympic Committee announced on March 24 that the Olympics, originally scheduled for July, would be postponed to 2021 as a result of the ongoing COVID-19 pandemic. In addition, the Oceania Continental Championships, the competition at which Stephens could’ve qualified for the Olympics, was canceled without awarding its sole male Olympic berth. Stephens had qualified for the Championships before the World Cup Series, but his injury made it impossible for him to compete.

The Oceania Gymnastics Union, the governing body of gymnastics in the Oceania region, intends to award that Olympic berth at one of its 2021 competitions. If Stephens’ knee heals in time for that competition, then he will have an extremely rare second chance to qualify for the Tokyo Olympics.

“I think the postponement was the right decision considering the severity of the coronavirus. That was the first thing on my mind,” Stephens said regarding the IOC’s decision. “I was less thinking about myself and more just making sure the rest of the athletes and the rest of the world is healthy and safe.”

At the same time, Stephens is excited to have this potential second chance, and if able, he intends to take advantage of this opportunity and go for Tokyo again.

Stephens’ journey to where he is today started on March 16, 2019. On that date, Stephens tore his right ACL while competing against Michigan and Penn State. While he was recovering, Australia failed to qualify a men’s gymnastics team to the Olympics, leaving only two spots for individual male gymnasts to represent Australia in Tokyo. Stephens was invited by Gymnastics Australia, the governing body of gymnastics in Australia, to vie for one of those spots, but his recovery time prevented him from competing until past the new year. In September, one of Australia’s spots was filled by Illinois alumnus Tyson Bull.

“All these doors just closed,” said Justin Spring, Illinois head coach. “How do we get this kid to the Olympics now?”

Stephens’ last opportunity to qualify for the Olympics was the 2020 Oceania Continental Championships, scheduled for April 16 to April 18 in Tauranga, New Zealand. There was a problem, however.

The NCAA Men’s Gymnastics Championships were scheduled for that same weekend in Ann Arbor, Michigan. It was impossible for Stephens to compete in both events. He ultimately chose to compete in New Zealand that weekend, but he had to decide whether to compete during the rest of the 2020 NCAA season.

“I had to sit down with the coaches and we had to make a game-time decision,” Stephens said. “We came to the conclusion that the best thing for both myself and for the team was to redshirt me so I could focus on the international stuff at the start of this year.”

Had Stephens competed this year, he would’ve missed half of the Illini season between recovering from his torn ACL and competing in Australia. He would’ve been available for only a few regular-season meets and the Big Ten Championships before missing the NCAA Championships. It made more sense for him to redshirt the entire season, retaining a year of NCAA eligibility while pursuing his Olympic dream.

But it was a difficult decision for Stephens to make.

“The Illinois team is a massive part of my gymnastics life, and it’s a massive part of why I’m still doing gymnastics. For me to put that on the back burner for a year was difficult,” Stephens said. “There are seniors that are competing this year that I don’t get to compete with anymore. It’s tough when I’ve been training with those guys for two and a half years.

The seniors, along with the rest of the team, were just as saddened by this fact as Stephens was. Spring remembers telling his team while it would be a hard pill to swallow, this could be the only chance Stephens would have to achieve his dreams.

Sophomore Hamish Carter is one of Stephens’ Illini teammates and is a close friend. Like the rest of the team, Carter was saddened by Stephens’ decision but supported his friend’s decision wholeheartedly.

“I know how much he wants to be a part of this college team, it wasn’t an easy decision to make at all,” Carter said. “He’s sacrificing a year of college to pursue the Olympic Games, which comes around every four years. That’s no easy task.”

Stephens spent much of the spring alternating between Champaign-Urbana and Australia for school and competition. Gymnastics Australia had invited him and nine other Australian gymnasts to compete at Australia’s Olympic Training Centre for the chance to qualify for the Oceania Continental Championships. Stephens was one of four male Australian gymnasts to qualify for the Continental Championships.

“I was looking very strong,” Stephens said. “I was probably a top candidate for the Olympic Games at that point.”

Back in Champaign-Urbana, Carter and the rest of the team followed along as Stephens competed.

“Clay was in great shape to come back as quickly as he did from his right ACL tear in the 2019 season,” Carter said. “As soon as he got back from his surgeries, he was doing as much as he could on parallel bars and high bar. It really paid off in his competitions in Australia.”

Stephens and three other Australian gymnasts had qualified to the Continental Championships, where they would be joined by four New Zealander gymnasts. Of those eight gymnasts, only one would earn his spot in Tokyo.

Before competing in April, Stephens wanted to gain some international experience, which led him to compete in the FIG World Cup Series in Melbourne on the weekend of Feb. 20-22. The World Cup was separate from Australia’s Olympic qualification process and was not supposed to impact his qualification status for the Continental Championships.

“Unfortunately, this sort of thing happens. I guess when you’re pushing to be one of the best, these sorts of things happen,” Stephens said. “You’re walking on this tightrope between world-class gymnastics and injury because at the end of the day you’re taking risks that a lot of other people aren’t taking.”

As crushing as his previous ACL tears were, this latest tear, which seemingly ended his Olympic dream, was an even more massive hit.

“The thing that’s the most painful is the fact that I had such a close team and we worked so hard. There was a group of five people that were very close to me and who worked very hard to try and get me to the Olympic Games,” Stephens said. “This one’s a hit for all of us, and a lot of my work feels like it’s gone down the drain after putting in a good ten plus months of very focused work.”

Spring, someone who has watched Stephens put in countless hours of work to reach his Olympic dreams, felt the emotional impact as well.

“It’s truly devastating what happened to Clay,” Spring said. “He’s come back twice rapid-fire from two horribly-timed knee injuries to have a third one, the worst one, before everything he was training for. It’s awful.”

Because of the time difference between Melbourne and Champaign-Urbana, Carter was asleep when Stephens was injured. His roommate and fellow Illini gymnast Sebastian Abedi told him when he woke up.

“That was just devastating. It was brutal,” Carter said. “I immediately thought of him and how he was doing and how he’d be coping with yet another significantly unfortunate injury. He’s the least-deserving person. He works so hard, he is constantly pushing forward and maintaining his motivation.”

Both Carter and Spring believed Stephens’ injury amounted to nothing more than a freak accident. Spring didn’t think Stephens tried to compete too soon after his previous injury.

Stephens had surgery on March 3 to reconstruct his MCL and his meniscus. He was scheduled to have another surgery six weeks after that on April 14 to reconstruct his ACL, but the surgery was postponed because of the COVID-19 pandemic.

“I’m keeping my fingers crossed that it can happen, but my overall concern is making sure that the community stays safe,” Stephens said.

Meanwhile, the OGU and Gymnastics Australia have not announced if or how the COVID-19 pandemic will impact the qualification process. Stephens is unsure if he will have to requalify for competition if the 2021 Oceania Continental Championships will be the qualifying event or what date that qualifying event will take place. Given all of the uncertainty with the qualification process and Stephens’ recovery period, he is not guaranteed a second chance but it’s very much possible.

“My hope is that the Olympic qualification doesn’t overlap with NCAA Championships or the Big Ten championships. That would pose a big issue to the team and to me,” Stephens said. “It’s still not ideal if it overlaps a regular-season meet, but that will be a much better outcome than if it did overlap with NCAAs or Big Tens.”