Illini of the season: Top players lead through up and down tennis season 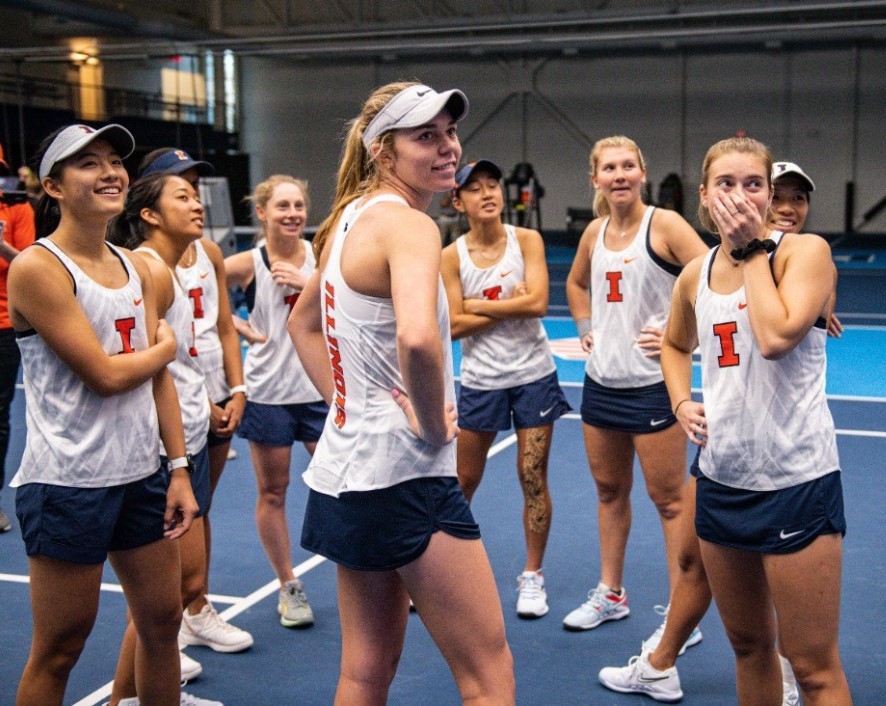 Freshman Josie Frazier stands and laughs after a team huddle during the meet against Eastern Michigan on Jan. 26.

Looking back at the short-lived Illinois women’s tennis season, the team struggled to string together collectively strong performances that could convert into wins. Fortunately, the team did have some bright individual performers who should help the team get back to winning during a full slate of games next season.

While we will never know if the Illini could have turned their season around, we can look back at the team’s top performers to get an idea of how they might look next year.

Junior Mia Rabinowitz came into the year as a proven hand for the Illini, having won Fighting Illini Female Freshman of the Year and Team MVP in the 2017-2018 season. Although Rabinowitz ended the season with a 5-7 record in both singles and doubles, she reeled off singles wins against top tier programs such as Michigan, Baylor and Purdue.

When junior Asuka Kawai, an elite talent on the team, went down with an injury this spring, Illinois’ season had a chance to unravel. Instead, Rabinowitz stepped into the number one slot on the team and thrived in the spotlight.

“Rabinowitz played at a really high level,” said head coach Evan Clark. “She played at number one for most of the year with Asuka out. She did a really good job with holding that spot down.”

A highlight of the year for Rabinowitz was her doubles win against No. 5 Duke. Rabinowitz, along with teammate junior Sasha Belaya, battled for the win, starting down 2-5 to eventually tie the score at 6-6 and force a tiebreaker game. Despite having momentum, the tiebreaker was lengthy and suspenseful. Both teams traded blows until Illinois eventually came out on top, 10-8, to win the tiebreaker and the match, 7-6, which secured the doubles point for Illinois.

Winning such a match was monumental for Illinois against an opponent as challenging as Duke. While Illinois eventually lost the match, Rabinowitz’s excellent play afforded the Illini a real chance to steal a match that might have been a lopsided loss otherwise.

“(Rabinowitz was) really steady for us all year,” Clark said.

The Senior who will be missed: Madeleine Gandawidjaja

Illinois had only one senior on their roster this season, Madeleine Gandawidjaja. Most of Gandawidjaja’s spring season was spent on the bench, as she has not participated in any matches since last seeing playing time on Oct. 6 at the Baylor Invitational. Gandawidjaja had a 3-3 singles record and 0-4 doubles record in the 2019 fall season.

Gandawidjaja joined the roster as a walk-on in the 2018-2019 season during her junior year, placing her as an older player on the roster despite having less experience in college matches.

While she wasn’t Illinois’ top player, Gandawidjaja helped the team by serving as an older player that set a positive example for a roster full of younger players.

“She worked really, really hard and came to every practice. Didn’t get to see the match court very much but was an awesome kid, who deserved it for sure,” said Clark of Gandawidjaja’s time on the team.

Working hard despite not receiving much playing time has likely contributed to a team culture that Clark has described as balanced and supportive.

Gandawidjaja likely won’t return next year. While she won’t be a major loss for the Illini on the court, her contributions to the team’s culture will be missed.

On a roster full of younger players, freshman Josie Frazier is a top underclassman to watch for next season. She went 4-4 in singles and 6-8 in doubles matches during the spring.

A common issue for freshmen is consistently playing at their best as they transition to tennis at the collegiate level, but Frazier bucked the trend by regularly winning matches against tough opponents. Some of her best singles wins came against difficult opponents such as Oregon and Purdue. Frazier also pulled off impressive doubles wins against No. 5 Duke, Oregon and No. 20 Washington, alongside teammate junior Emilee Duong.

During the partial season, Frazier was a competitive and reliable player.

“Josie probably had the most consistent results, just match in, match out,” Clark said.

Frazier ended her season on a high note with her singles win against Purdue, Illinois’ first Big Ten opponent of the spring. Clark saw that win as a potential jumping-off point for Frazier, as he felt many of the freshmen were in the process of “turning a corner.” She’ll get a chance to turn that corner when tennis hopefully resumes next season.