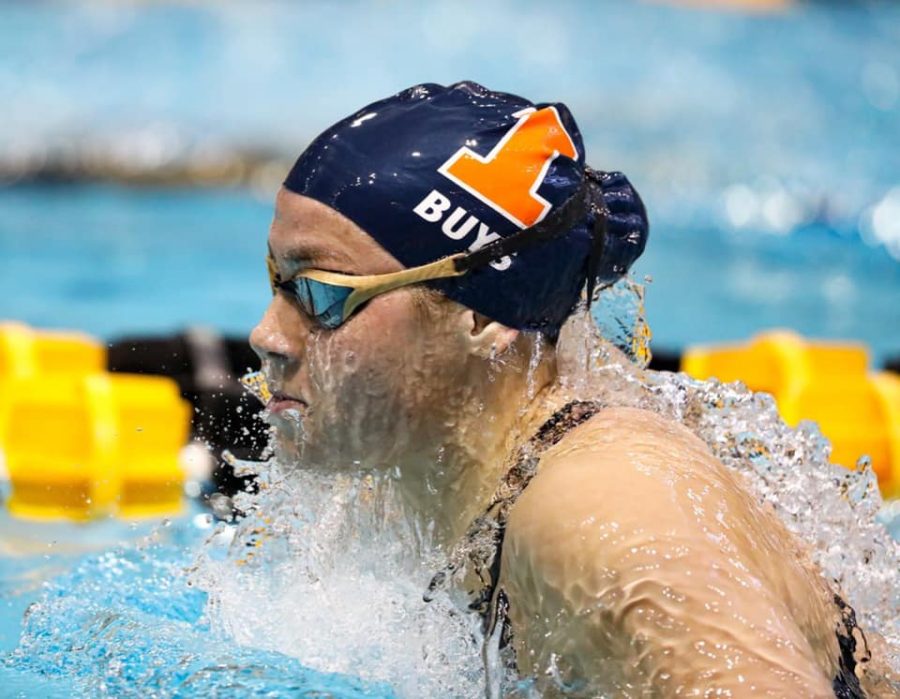 Freshman Jeanri Buys competes in a breaststroke event at the Big Ten Championships on Feb. 19.

Amidst the cancellations of in-person school and sports, Illinois Governor J.B. Pritzker placed the state under a shelter-in-place order. Getting home wasn’t so easy for freshman Jeanri Buys who is from Johannesburg, South Africa.

“I had to change my flights back home four times,” Buys said.

Before everything was canceled for the semester, Buys and some of the swim and dive members were at the CSCAA National Invitational Championship and NCAA Zone C Diving Championships.

Both meets were only able to get through the first day of prelims and finals in front of an empty crowd.

“It was a very surreal day because I was getting constant updates either on social media or through our administration,” said head coach Sue Novitsky. “I feel sorry for my athletes who could have potentially made it to NCAA Championships.”

The Illini were given an early start to spring break, and Buys went to Austin, Texas to spend some time with freshman Lauren Partridge.

While in Texas, she found out she had to go home for the remainder of the semester.

“I was actually having a nap and woke up to her (Partridge) telling me everything is canceled for the rest of the semester,” Buys said. “I was only meant to fly back home in May for summer, but I obviously had to change my flight.”

With the help of assistant coach Elliott McGill, Buys was able to book a flight to go back home in three weeks. Until then, Buys, Partridge and her family went back up to Champaign from Austin to help pack up and move out of her dorm.

While on the long trip, Buys got a phone call from her mom about travel bans.

“My mom phoned me and said South Africa is planning travel bans, and I need to change my flight again,” Buys said.

After changing her flight for a second time to leave in two days from Bloomington, Buys stayed in Champaign with another freshman teammate, Lizzie Gile. However, on March 20, J.B. Pritzker issued a stay-at-home order to start on March 21 at 5 p.m., requiring residents to stay indoors to slow down the spread.

“It was that Friday when Illinois announced its lockdown, and I had to change my flight that was leaving from Bloomington, Illinois to Atlanta,” Buys said.

After the last change of her flight, she was flying from Indiana to Atlanta and then to Johannesburg.

“I am so lucky to have such amazing girls on the team that will literally do anything for me and any other girl on the team, with the coaches helping as well,” Buys said. “Lizzie (Gile) drove me to Indiana, and I finally got on my flight back home.”

Now back in her hometown, Buys is spending time catching up with her family as South Africa is in lockdown for 21 days.

“It is also still summer so I have been trying to get a tan since I can’t leave home,” Buys said. “I have been really busy with school, doing homework, studying.”

While in lockdown, Buys said no one is allowed to leave the house. Walking in the streets and travel is limited to grocery stores only.

“The South African military is out on the streets in some parts and fining people who are outside their homes unnecessarily,” Buys said. “I have even heard some people are getting arrested.”

Although Buys may be far away from her teammates, Snapchat and weekly FaceTime calls allow her to keep in contact with her friends and future roommates.

To meet up, Novitsky sets up weekly Zoom meetings as a team and also individually.

“I’ve been having individual meetings with our athletes and our incoming athletes,” Novitsky said. “It’s been very helpful in staying in contact with the team.”

For Buys and the rest of the team, the coaches are still making sure they are all in shape for when they come back to train for the upcoming season.

As Buys’ first year as an Illini is cut short, she feels sad because the freshman class was becoming closer and growing into the team.

“I am very grateful that it happened in my freshman year because I know it would have been even worse if it was my senior year, and I feel awful for all seniors who got their final year cut short,” Buys said.

Buys said some of her favorite moments of the season were the dual meet against Michigan State, the team’s training trip and the trip to Florida.

Senior Emily Martin helped make the training trip better for her. As for the Florida trip, Buys said the sun and traveling put everyone in good moods.

Buys chose Illinois because of the team, coaches, academics and the campus. She says it’s the best decision she has ever made.

“Jeanri (Buys) just has a dynamic personality, and she brings a lot of enthusiasm to the team. She wants to keep improving as a swimmer, and she wants the team to keep improving,” Novitsky said. “That was something that stood out about her.”

As Buys’ first year as an Illini comes to an early close, she is looking forward to the next three years to improve her times and build on the friendships she made over the past year.

“She dropped a lot of times this year,” Novitsky said. “Now that she’s adjusted she’s really ready to keep taking those steps to improve as an athlete.”