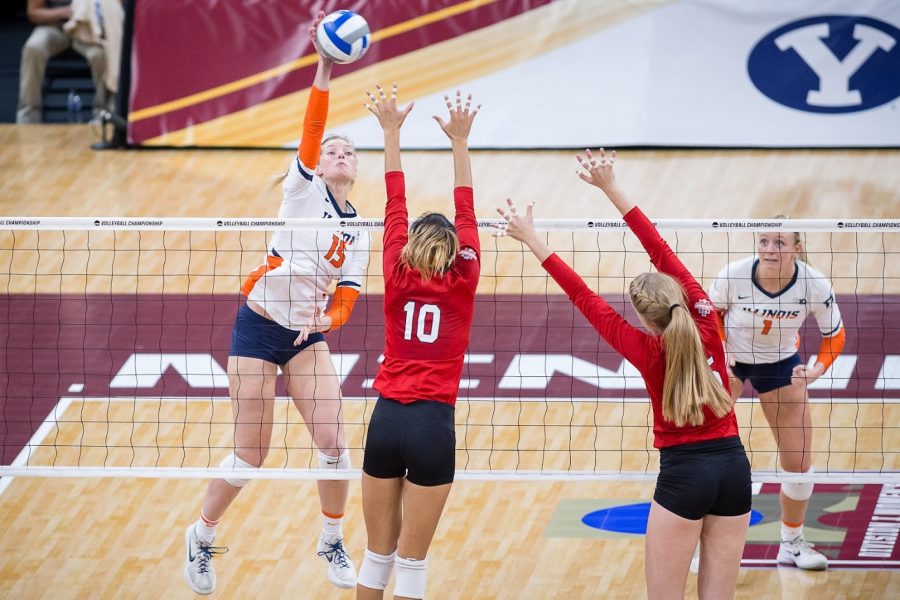 Illinois outside hitter Megan Cooney spikes the ball during the match against Nebraska in the Final Four of the NCAA tournament at the Target Center on Thursday, Dec. 13, 2018. Nebraska defeated Illinois 3-2.

The outbreak of COVID-19 didn’t cut the Illinois volleyball team’s season short, but it is already starting to affect their 2020 fall season. A loss of workouts, team-bonding and time for planning their upcoming season puts the Illini in an unexpectedly difficult position.

The spring season is very important to collegiate volleyball teams, as it includes both workouts and competitions. It’s also a time for incoming freshmen to come in and get their first look at the differences between high school and college volleyball. Coaches aren’t allowed to work with athletes in the summer, which makes the spring season that much more important for the Illini.

“This is one of our biggest chances for player development because we don’t get summer workouts,” said head coach Chris Tamas. “But we’re a little bit used to this since we aren’t allowed to have summer workouts where people [coaches] are around.”

Despite not having this time to train with each other, the team has tried their best to work with one another to improve. The Illini have begun working together and are trying new ways to replicate their usual in-person training.

“We have people broken into position groups,” Tamas said. “We have a sheet that we’ve given to every position saying what they have to work on. Our sport is unique, it’s tough to replicate those reps at home.”

Rising-star Megan Cooney added that the quarantine has been tough for her and her teammates. She said the loss of the spring season isn’t something that can be shaken off, because there are many takeaways from the spring that prepare them for what’s to come in the fall.

“The spring season is great for us to focus on skills for us to work on, wherein the fall it’s more about mending the pieces together best you can,” Cooney said. “When we’re at home by ourselves we’re missing on playing together as a team … That’s one of the hardest things.”

The loss of the spring season also affects coaching decisions for the fall. Since the spring is a time for both individual and team improvement, the coaches are able to see who has improved the most and looks ready for bigger roles. With the loss of four seniors including starting hitter Jacqueline Quade and starting middle blocker Ashlyn Fleming, as well as the early departure of junior starting libero Morgan O’Brien, the Illini are looking for players to fill those roles.

“This is a time where we wanted to figure out new lineups with losing these seniors,” Tamas said. “I’ve got players on my team that are up for the challenge … This is one of our biggest chances for player development.”

While Tamas doesn’t get those extra months of work to figure out a lineup, a few underclassmen played valuable minutes last fall, which should give him a head start. Rising sophomore and middle blocker Kennedy Collins started 22 matches for the Illini and notched 129 kills. Collins also had 80 total blocks, the second-best on the team behind Fleming.

The Illini will also have rising redshirt freshman and hitter Ellie Holzman back in the lineup after she missed her entire freshman campaign with an injury. Holzman was the 2018-2019 Gatorade National Volleyball Player of the Year.

Although the team has lost so much without their spring season, there are some positives the team can take away. Despite not being with each other on the court, there’s still plenty of time for watching more film to prepare for next season and finding new leaders.

“We can watch past films on ourselves and other teams which is very beneficial, and we’re talking about how we can define our own team,” Cooney said. “We can [figure out] how to be the best leaders we can be on and off the court and that has been beneficial for the culture of our team … I think we have a great team this year.”

Both Cooney and Tamas are still very excited about the potential the team has for the fall season. Although a lot of time, training and development has been lost due to the outbreak of COVID-19, the team is prepared to do everything that they can to put themselves in the best position for the fall.