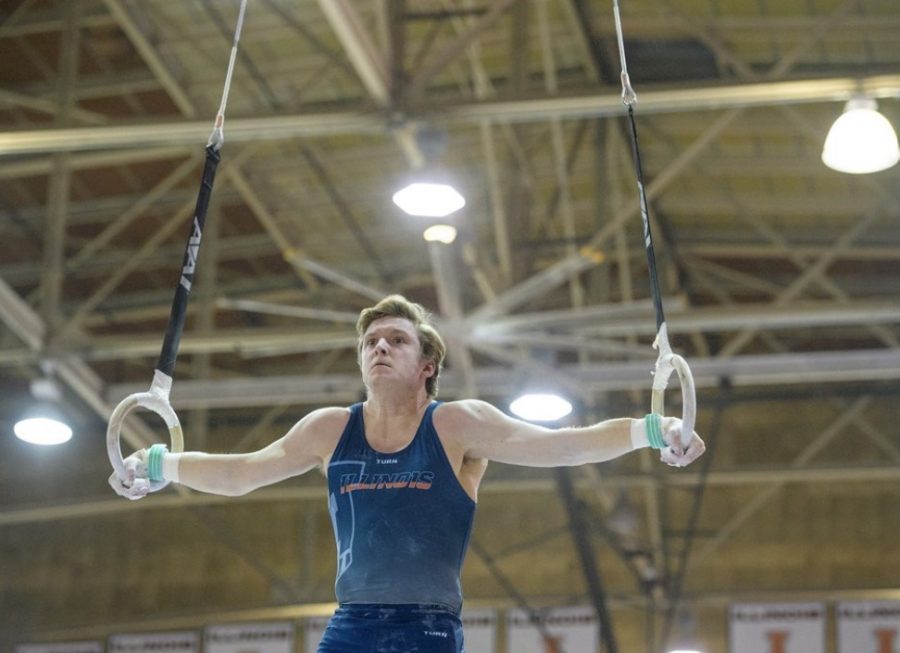 Senior Danny Graham competes in the rings event during the match against Oklahoma on March 17, 2018

On March 21, the College Gymnastics Association announced the names of 39 male collegiate gymnasts who received a total of 50 All-American accolades in six events (everything but all-around) for the shortened 2020 season. Five Illini were among those 39 gymnasts: senior Sebastian Quiana and freshman Connor McCool on floor exercise, senior Michael Paradise and sophomore Ian Skirkey on pommel horse and senior Danny Graham on still rings.

All-American accolades are normally determined by the results of the NCAA men’s gymnastics championships, with the top eight gymnasts from each event receiving All-American honors. Because the championships were canceled, however, the CGA awarded the 2020 All-American accolades based on the national qualifying average (NQA) of each gymnast: the average of the four highest scores a gymnast receives in an event, counting no more than two home meets and counting at least one five up/five-count score. The gymnasts with the top eight NQAs (or nine in the event of a tie) were named All-Americans.

Head coach Justin Spring, although proud of his five All-American gymnasts, believes more of his gymnasts should’ve been recognized, pointing to a flaw in this method.

“It rewarded those who weren’t injured,” Spring said. “It’s mind-blowing to me that Hamish Carter is not a four or five-time All-American.”

Carter was an all-around gymnast, competing in all six events, but his NQA in all of them suffered heavily when he injured his ankle on March 1 against Iowa, the first five up/five-count meet of Illinois’ season. The injury sidelined him for the rest of that meet and the meet against Michigan and Penn State. The Michigan-Penn State meet turned out to be the last meet of the season, meaning Carter missed a very important criterion to be named an All-American.

“It just flushed his average down the toilet,” Spring said. “You end up with what looks like a terrible season for him, but he was having a great year. I feel terrible that the history books will not remember him for what he did this year.”

For the Illini gymnasts who had top eight NQAs, senior Danny Graham was No. 1 in the country on still rings. With five still rings titles in the 2020 season, Graham was, according to Spring, “more likely than not” to win a still rings national championship. He was also returning to competition after a year-long recovery from a broken tibia, which happened early in the 2019 season.

“It’s a great comeback story,” Spring said. “He’s an All-American, which is great, but it’s a tough thing to swallow for a guy who prepared essentially two years for this chance (to be a national champion) and to have it stripped away.”

Despite being listed as a senior on the team’s official roster, Graham’s 2019 redshirt season allows him to return next season to finish his collegiate career.

Sophomore Ian Skirkey, according to Spring, vastly improved his pommel horse performance from last year. Skirkey won two pommel horse titles this season, the first of his career and was No. 3 in the nation in the event.

“Ian stepped up in an unbelievable way,” Spring said. “ His pommel horse was twice as powerful and good this year (as last year). When I look at who improved the most from last year to this year, Ian blew it away.”

Spring also had high remarks for freshman Connor McCool, who won three floor exercise titles this season and was No. 3 in the nation on floor exercise.

While Quiana and Paradise have finished their careers, Graham, Skirkey and McCool will return for the 2021 season. Having three All-Americans from the previous season still on the roster is very advantageous for the team, especially with a large class of six freshmen joining the team.

“They’re going to be an example to those guys (the freshman) of how you hit and what it takes to become an All-American and the best in the country,” said Spring. “Those returning All-Americans, those returning competitive veterans, are vital.