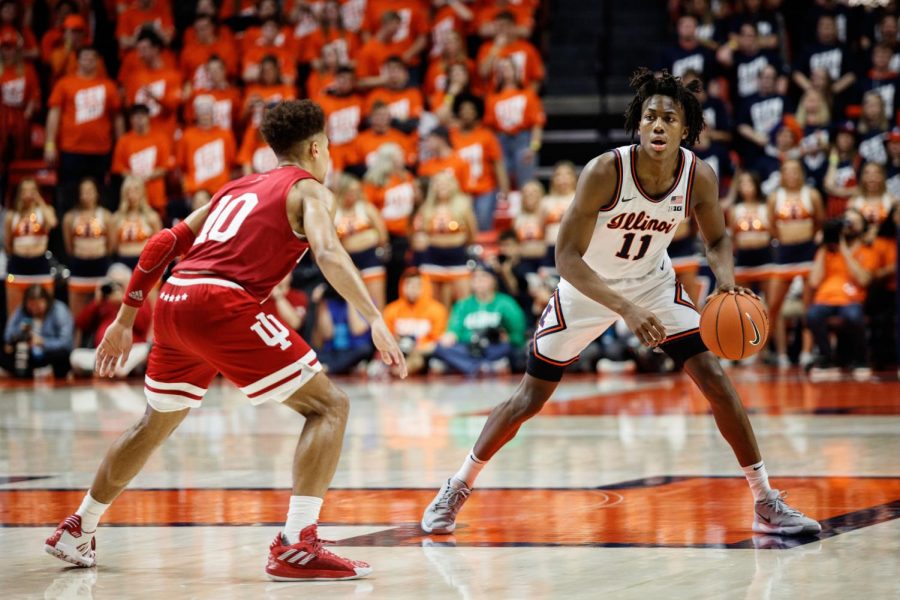 Illinois sophomore Ayo Dosunmu dribbles the ball against Indiana on March 1. The Illini beat the Hoosiers 67-66.

One year ago Ayo Dosunmu declared he had unfinished business in an Illinois uniform. One year later, Dosunmu’s business could be completed. Dosunmu announced via his Twitter Wednesday that he is declaring for the 2020 NBA Draft. Dosunmu also mentioned he has not hired an agent, which would make him eligible to return to Illinois for a junior season if he decides to withdraw his name from the draft. I was able to ask The Athletic’s NBA Draft expert Sam Vecenie about Ayo Dosunmu’s draft stock after his two seasons in Champaign.

The Daily Illini: Why does Ayo rank in the 40s on your big board of players?

Sam Vecenie: Yeah for me, what I am trying to figure out is what is his best role at the next level. Obviously, at Illinois, he played next to Trent Frazier and shared the lead guard duties a little bit and would take over as games got later and tighter. I think he is the guy that his coaching staff and team trusted the most. He became one of the best closers in all of college basketball. But, when you are projecting someone to the NBA who doesn’t really project as a starting-caliber-level lead guard right now, just a scorer. You are trying to project him into a role. The biggest thing that a person can do at the next level is to shoot the basketball. You have to be able to shoot the basketball at a high level to be able to space the floor for his teammates.  Otherwise, it is going to be harder for his team to get an efficient offense. The executives and evaluators that I have talked to, they are all just like we need a guy that can shoot for our stars. Otherwise, our stars are going to have this thing to operate. While I like Ayo’s ability on the ball, I think he is a good pick-and-roll creator, he does have a strong pull-up jump shot, especially from the midrange, better than what he might get credit for. I do just worry about what his offensive role is at the next level if the jumper from behind the NBA three-point line doesn’t translate.

Vecenie: The work ethic, who he is as a person. If you do background intel on a guy you start to learn who they are. In Ayo’s case, all of that is exceedingly positive. He is one of the kids who just gets raved about being a terrific person and player to have around the program; I think all of that is going to play into his favor. With that being said, you probably aren’t looking at him being a primary lead guard at the next level, but I do really like him as a secondary creator who can facilitate on the secondary fast-break, or can grab a rebound and push the tempo in transition and create a shot or is capable of being able to run a second side pick-and-roll action and because he has that pull-up ability in his mid-range, he can create a shot that is probably not hyper-negative. I think all of those factors play up. I think that he is a hard worker on defense plays up. What I am trying to figure out now is how switchable he is. I think he can guard ones and twos at a high level. I am starting to try to get a handle on if he gets stronger, can he handle threes and fours if he gets pushed into those situations. I think there are some very real positive aspects, and I think that when you get in the top of the second round he is a totally reasonable player for teams to take a good strong look at and really consider selecting.

DI: Do you think Ayo is a player that is hurt by there not being pre-draft workouts with teams and there potentially not being an NBA Combine?

Vecenie: Team are still going to be able to FaceTime and have meetings and get to know who the person is. Given the fact that all the intel I have heard is extremely positive, I think teams will go into those meetings knowing that he is a great locker room guy to have around. At the end of the day, all that would have mattered for is how he would have shot in these pre-draft workouts and without knowing if he is capable of improving, I think it is tough to say if he was hurt by it at all.

DI: Was Ayo a player that was hurt by there not being a Big Ten and NCAA Tournament?

Vecenie: I thought this Illinois team could have made a deep run in the NCAA Tournament, largely because they had that closer in Ayo that might have really blown up in that process. I think he is hurt much more by not being able to prove himself on the biggest stages of basketball, rather than the pre-draft process being canceled. I think he is someone who would have a good chance to shine through with Illinois making the kind of run I thought was in their potential.

DI: If he were to come back for a junior season and shoot between 35-37% from behind the three-point line, how much more attractive does he become despite being a year older?

Vecenie: To me personally, the addition of one more year wouldn’t be that big of a deal. It would be much more important to him to prove the ability to shoot it would drastically outweigh the addition of a year onto his age. Having said that, his biggest thing is Illinois has a chance to be very good again next year if he were to return and if he was able to come out and average 19 points a game, five assists and five rebounds a night and shoot 35-38% from three, he is almost certainly an All-American next season. Just by nature of that, he would be a higher-profile college basketball player and thus would get even more extensive looks from NBA teams. You can look at plenty of players who helped themselves, despite being in school. Payton Pritchard is someone who really helped himself, Tre Jones is a player I think really helped himself this year, Davon Dotson probably helped himself a lot, too. There are examples every year who come back and help themself. I don’t this his draft stock is overriding positive that it is you know a no brainer to go play in the NBA. If he wants to be a professional basketball player, great, he should do what he wants to do. I do think there is growth for him to return if he chose to return.

DI: Why are his projections all over the place and why is Ayo so difficult to project?

DI: Ayo’s style of play seems to not fit in the NBA as well as it might have 10-15 years ago. How does that affect him?

Vecenie: I would say that the direction the league is going does not help his draft standing. I think that fact that the league has gotten more analytically inclined I don’t that the three-point jump shot being the essential part of his translation to the NBA is going to change any time soon. If anything, the league is going to keep pushing the boundary on the three-point jump-shot. His game is not tightly fit into a single sentence, and that is probably something that hinders him. I think that is what makes his wing skill and his jump-shot so valuable for him because if he does start to shoot it at a high level, like if he shoots it 37% from the NBA three-point line, then he is almost certainly a very useful NBA player. However, if he doesn’t bring a jump shot to the table, he is then not bringing the most important thing to the table and it then becomes trickier to figure out where he figures in an NBA role. I think that is a long-winded way of saying I think that is why he is all over the board. The swing skill is going to come down to one skill.

DI: If he was to come back to Illinois and shoot 35-38% from three, what is his ceiling?

Vecenie: If he is an All-American on a good team at Illinois, continues to be a leader, which I think everyone would anticipate and starts knocking down shots from distance, it’s not impossible to see him go top-20. We have seen a guy make that kind of jump. He is going to be battling uphill because next year’s draft is going to better than this year’s draft. But, I think there is legitimate room for his growth in regards to his draft stock.