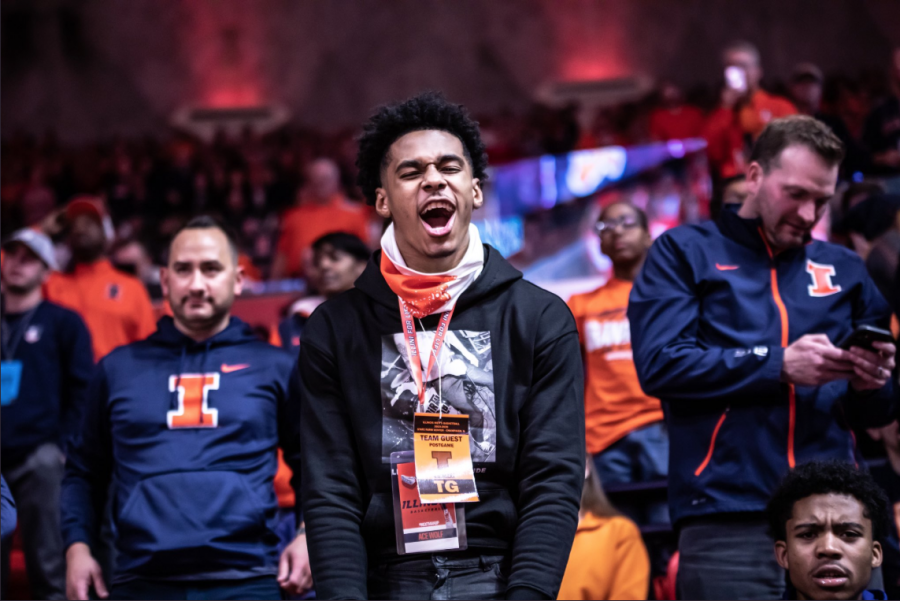 Illinois basketball commit Adam Miller cheers while watching Illinois’ game against Indiana on March 1 at State Farm Center. Miller will join the Illini for the 2020-2021 season.

Today, April 15, marks the opening of the signing period for men’s college basketball recruits. High school players who haven’t previously signed can now send their letters of intent to the schools they wish to attend, officially ending their recruitment process. Just two days ago, Illinois sat comfortably in second place in Big Ten recruiting rankings but a noticeable distance away from Michigan in first. However, a pair of shocking revelations for the Wolverines in the past 48 hours have the Illini knocking on the door for the top spot.

Michigan was listed as the overwhelming favorite to land a commitment from five-star guard Joshua Christopher, but the Southern California native shocked most recruiting experts and chose to commit to Arizona State on Monday instead. That news was followed up 12 hours later by a five-star Michigan commit, forward Isaiah Todd, choosing to pursue a professional career rather than attend college next year. With prospects LaMelo Ball and R.J. Hampton both projected to be drafted high in the 2020 NBA draft after playing in the Australian NBL instead of going to college, more and more top recruits around the country are looking at one-year professional alternatives as opposed to the traditional college route, and Todd is the latest high-profile example.

With those two misses for Michigan, Illinois is now slated to bring in arguably the highest-rated recruit in the Big Ten for the 2020-21 season, assuming four-star guard Adam Miller signs, and all signs on his social media indicate he will.

Adam AceWolf Miller on Twitter
“Lol I will be signing https://t.co/qlRQc6C4ko”

The two most-respected recruiting ranking platforms, ESPN.com and 247sports, are split when it comes to the conference’s top 2020 recruit. While Miller sits above all other Big Ten recruits per ESPN, he is one spot behind Michigan commit Hunter Dickinson in 247sports’ rankings, though both have identical 98.67 ratings. With most high-profile recruitment done in terms of Big Ten basketball, I take a look at the top players coming into the conference next year with my first, second and third teams of Big Ten incoming freshmen.

It’s clear that when it comes to recruiting guards, Illinois head coach Brad Underwood runs the conference. The two highest-rated incoming Big Ten backcourt players, Miller and Puerto Rico native Andre Curbelo, are both in position to suit up in Champaign next season. Interestingly enough, if Illinois sophomore Ayo Dosunmu elects to return for his junior year, neither Curbelo nor Miller would be projected to start next year as Dosunmu and senior-to-be Trent Frazier would likely be entrenched in the backcourt. The ideal plan next season, if the stud sophomore returns, would be for the two freshmen to join the rotation, spelling Frazier and Dosunmu, before taking over together in 2021-22. However, if Dosunmu declares for the NBA draft, the path opens up for Miller to slide in and contribute big minutes right away. Illinois still sits behind Michigan by a narrow margin in the overall class rankings, and the rest of the first team bears that out as the Wolverines land two players: Zeb Jackson and Hunter Dickinson. Dickinson is a very mobile, left-handed center with a long frame and a soft touch, similar to recent Wolverine graduate big man Jon Teske. Jackson may be an even better recruit than his already solid rating would suggest, given he had to settle for being the fourth fiddle on a stacked high school team that featured Oklahoma State pledge Cade Cunningham, the top recruit in the 2020 class, along with five-star North Carolina signee Day’Ron Sharpe and four-star Arkansas commit Moses Moody. Michigan State has a recent habit of winning with big-bodied centers that aren’t quite as tall as traditional post players, so Mady Sissoko has a chance to succeed in the footsteps of Kenny Goins, Nick Ward and Xavier Tillman in East Lansing.

Michigan State must find a way to replace an undersized guard who masters the pick-and-roll and gets in the lane with ease in departing senior Cassius Winston, so who better to replace him with than a carbon copy in A.J. Hoggard? Jaden Ivey will provide Purdue with a much-needed scoring boost after just two Boilermakers averaged double-figures last season. Terrance Williams may find it hard to crack the Michigan rotation with Isaiah Livers and Franz Wagner both likely back on the wing next year, but he may get more of an opportunity after the Wolverines’ departures this week. Ben Carlson will be supplanted behind senior big men Nate Reuvers and Micah Potter next year, but the Wisconsin program has a rare ability to keep kids in the program for their entire eligibility despite not frequently playing freshmen big minutes. Cliff Omoruyi may be the biggest surprise of the Big Ten basketball recruiting cycle. When thinking of great basketball players that went to high school in New Jersey in recent memory, names like Kyrie Irving, Karl Anthony-Towns, Myles Powell and countless other elite recruits come to mind. What do all those guys have in common? None went to the flagship home state school, Rutgers, and most didn’t even consider the Scarlet Knights. However, up-and-coming head coach Steve Pikiell was able to seal the deal with Omoruyi. Quality big-man play was something the Scarlet Knights lacked this past season, so having a one-and-done level stud in Omoruyi to join up with backcourt stars Geo Baker and Ron Haprer Jr. could see the Scarlet Knights in contention for a conference title next season.

There were a few higher-rated Big Ten recruits than Coleman Hawkins that didn’t make the list, but all of them were guards, so the three-star Illinois signee snuck in to the third team. Similarly to Michigan’s Zeb Jackson, Hawkins suffers from being greatly overshadowed by other elite recruits, as his high school teammates include five-star guard Jalen Green, who some argue is the best player in the class, as well as five-star Texas Tech signee Nimari Burnett. A slender, long forward with spot-up shooting potential, it may take Hawkins a season or two to see the court, but his skill set could fit perfectly to open up the floor for Curbelo and Miller in the future. The Big Ten is no stranger to players holding their famous NBA fathers’ namesakes, with the likes of Glenn Robinson III, Tim Hardaway Jr. and Jaren Jackson Jr. all having found success in the conference on their paths to the NBA, and Jamal Mashburn Jr. could be the next player in line to do so at Minnesota. He’ll have some help too, as Illinois native Martice Mitchell will be relied on to help replace standout sophomore Daniel Oturu, who declared for the NBA draft with the intention to sign with an agent. Anthony Leale and Ethan Morton elected to join in-state rivals, meaning the two may be duking it out on the wing against each other in heated rivalry games for years to come.

Though the statuses of both Ayo Dosunmu and Kofi Cockburn are unknown at this point, it’s clear Illinois stacks up favorably against other conference foes going forward.