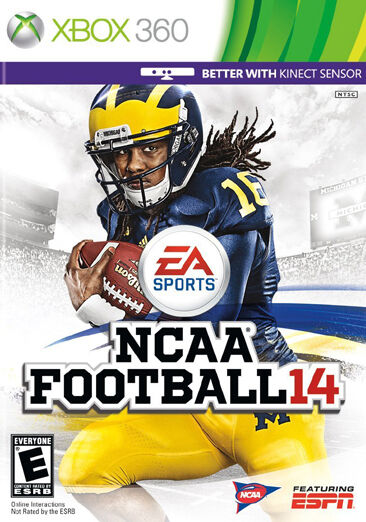 The cover for the NCAA 14 videogame by EA Sports.

With sporting competition suspended around the world for over a month now, many are turning to the virtual world to satisfy their sports cravings. Every year, updated editions of popular sports video game franchises come out, such as EA Sports’ FIFA and Madden, 2K Sports’ NBA 2K and SIE San Diego Studio’s MLB: The Show, but none have quite the cult following like EA Sports’ NCAA Football series.

With many people stuck at home in social isolation, college football fans are blowing the dust off their old PlayStation 3 and Xbox 360 to relive their great memories of playing the game.

Among those fans is Barstool Sports’ Dan “Big Cat” Katz, who has documented the journey of his created character, an offensive coordinator named Gus Duggerton, affectionately known as “Coach Duggs.” Starting at the University of Toledo, then moving to Florida State the next season and now the University of Southern California, Big Cat is not only broadcasting each game he plays live on Twitch, but he is also posting on social media as if he is actually a real coach. With nothing else to report on, those programs have even acknowledged Coach Duggs’ fake impact.

Big Cat’s revitalization of NCAA 14 has inspired others to create fake accounts taking the aliases of their created players, and a student from Michigan State University even fooled Northern Illinois head coach Thomas Hammock into engaging with him in a direct-message conversation after reporting from his fake player’s account that he had been offered a scholarship by the Huskies.

Several lawsuits from college athletes over the use of their likenesses caused the franchise to be suspended after 2013, but this past October, the NCAA announced new rules for athletes’ rights to profit off of their names and likenesses would be added by 2021, which has many optimistic the series will return in the near future.

Attempting to capitalize on its return to glory, some are selling the game for relatively high prices on Amazon and eBay. Beyond that, others have been selling downloadable rosters that are updated each season to reflect real new players since the game’s disappearance.

For those who either forgot what the game had to offer or have never played and are considering making the purchase themselves, I decided to turn my PS3 back on and review NCAA Football 14, the final college video game created to date.

As I turned the system on, I popped open the case displaying former Michigan quarterback Denard Robinson on the cover, but there was no disc inside. I quickly realized this was the final game I played before making the switch to PS4, and I had accidentally left the disc in the system for over 5 years, so I feared if it would even still work.

To my relief, it played right away without trouble. The first impression of this game is it needs a soundtrack update real bad. There is only one song, a generic pep-band pump-up tune that plays on a loop for the entire period the game is on, something that would not fly nowadays, especially when other sports game series such as NBA 2K have turned to artists like Pharrell Williams and Travis Scott to curate playlists for their recent games.

Looking at the rosters, it’s fun to see how EA rated future NFL stars and players who broke out in 2013, and whether or not the ratings they gave were justified. It should be noted that players’ actual names are not used, but each team’s players correspond to its actual 2013 roster in terms of height, weight, jersey number, year in school, race and home state.

The game’s highest-rated player is South Carolina’s Jadeveon Clowney at 99 overall, a future No.1 overall pick who was coming off that “hit heard ’round the world’” against Michigan the season before.

2013’s eventual Heisman winner, Florida State’s Jameis Winston, is rated at 85 overall, despite not playing in 2012 as a redshirt. Winston is one of three Heisman winners featured in the game, along with Texas A&M’s Johnny Manziel at 97 overall and Oregon’s Marcus Mariota at 90 overall. Though 2017 Heisman winner Baker Mayfield was in college in 2013 as a freshman walk-on, his likeness could not have been created in time for the game’s release that year.

The quarterback who ended up first in the FBS in both passing yards and touchdowns in 2013, future Raider and Fresno State’s Derek Carr, is rated at 92 overall, while his top target that year, current Green Bay Packer Davante Adams, is rated an 82.

One of the most famous, or infamous based on how the rest of his career went, one-year wonders in recent college football memory, Boston College’s Andre Williams, is rated at 83 overall, just the third-highest running back on his own team. Williams would go on to finish fourth in the Heisman Trophy voting while running for an NCAA-leading 2,177 yards and 18 touchdowns.

Another forgotten college star that may have special meaning to those in Illinois is Northern Illinois quarterback Jordan Lynch, who is rated at 92 overall. The Chicago native set records for quarterback rushing while at NIU but could never develop in the NFL into what we see in the present day out of the Saints’ Taysom Hill.

Brandin Cooks ended up leading the FBS in receiving in 2013, but he is well below the top-rated receivers at 85 overall, although to be fair, the receivers rated above him are all future NFL players, such as Mike Evans and Sammy Watkins.

What’s abundantly clear in this game is that unlike other sports games where crossing the 80-rating barrier usually signifies a good player, it takes more of a rating in the 87 range to be considered good in NCAA 14, as many bench players across the FBS have low 80s ratings.

For Illinois, former quarterback Nathan Scheelhaase leads the way with an 89 overall rating. Interestingly enough, the 2013 Illini that did end up making it to the NFL, Dawaune Smoot, Christian DiLauro and Ted Karras, are all vastly underrated, as none even crack a 72 overall rating, with DiLauro even listed as a tight end, the position he played in high school before switching to defensive line and then offensive line while at Illinois. The Illini finished just 4-8 in 2013, and tailback Josh Ferguson, who enjoys an 81 rating, was pretty much the only bright spot that year, running for 779 yards and 7 touchdowns.

When it comes to the Big Ten, the highest ranking is shared by two players, Michigan’s Taylor Lewan and Ohio State’s Braxton Miller, who both sit at 95 overall.

Beyond player ratings, the game has a lot of outdated information that isn’t its fault. Recognizable schools like Michigan, Florida, Oklahoma, Nebraska, Miami (FL), Wisconsin and Notre Dame have since-abandoned uniform brands. Rutgers and Louisville remain in the American Athletic Conference, while Maryland is still in the ACC. Current FBS schools Charlotte, Appalachian State, Coastal Carolina and Georgia Southern are not even in the game. Schematically, pretty much all the teams are out of touch compared to today’s run-pass option spread offenses that rule college football. The Big Ten is also split into the Legends and Leaders divisions, which, although terribly named, actually would have probably benefited the conference in the long run, with teams being distributed more evenly, as the East division nowadays is seen as drastically more prestigious than the West.

Most critically, the BCS system is still in place, meaning there is no four-team playoff, and power conference teams can finish undefeated and not get to play for a national championship, which definitely hurts.

On the positive side, however, one of the things that makes this game so special is it has two high-quality game modes. Whereas other sports games have often prioritized one game mode at the expense of others in their games, feel free to email me if you play FIFA Career Mode and want someone to vent with, NCAA 14’s Road to Glory and Dynasty modes are both stellar options.

In Road to Glory, gamers create a player from high school, then earn scholarship offers and playing time guarantees based on statistical success. Once in college, if your player is not the day-one starter, he works his way in practice each week before eventually earning position battles to move up on the depth chart. Once he becomes the starter, more and more freedom within the playbook is earned the better your player performs.

In Dynasty mode, where Coach Duggs is currently thriving, players create a coach, either as an offensive coordinator, defensive coordinator or head coach, and manage either one side of the ball or the whole team. They also handle recruiting new players if they choose to become a head coach. This can give users complete control over a program, from playing games, to depth charts, to schedules or even customizing conferences.

When considering whether or not to pick this game back up again, there are certainly pros and cons to consider. On the negative side: rosters, logos and bowl games are outdated, and the equipment department needs a major update. There’s limited cleat choices, no arm and leg sleeves and Nike schools can only wear white or black socks (only one team in the history of the College Football Playoff has worn a brand other than Nike/Air Jordan). And ethically, the idea of playing a game that has allowed a company to profit millions off players that received no compensation for the use of their near-identical likenesses is a tough pill to swallow. But if you can overlook all of that, and especially if you’re willing to put in a little time and effort to update the rosters yourself, which the game allows for, users will be provided with the enjoyment they desperately need at the moment and be able to play a recent-enough game where they can build their favorite school into a national champion, either as a player or a coach.