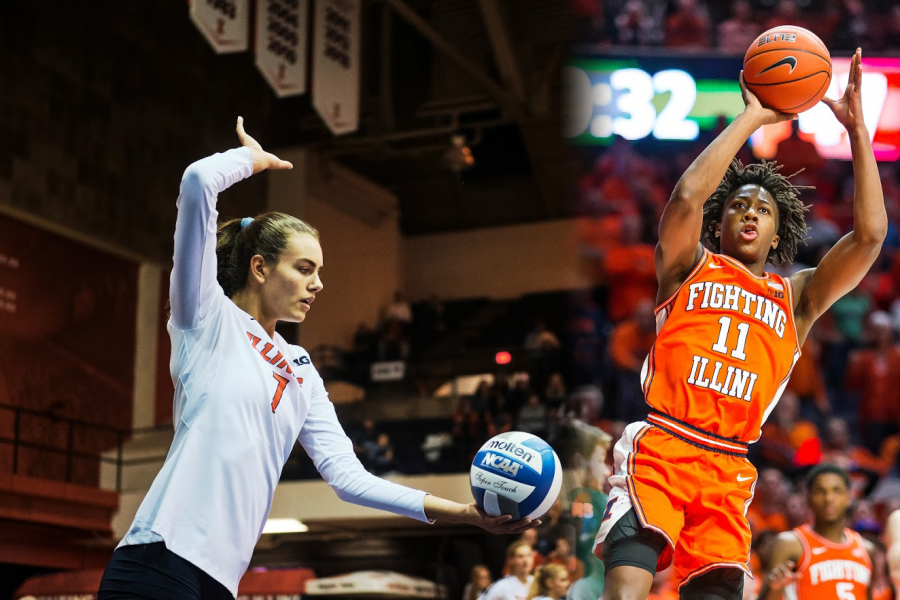 Illinois men’s basketball guard Ayo Dosunmu and women’s volleyball outside hitter Jacqueline Quade were named Dike Eddleman Athletes of the Year for their past season performances. The award is named after Dike Eddleman, who garnered 11 varsity letters at Illinois. Dosunmu became the first male basketball player to take home the award since Deron Williams, while Quade is the third straight volleyball player to win the award.

While both of these athletes’ careers have been met with extreme success, the paths of how they got there and what their future looks like differ in exciting ways.

Dosunmu, a Chicago native, came to Illinois in a time where the Illini were heading towards obscurity — no NCAA tournament berths since 2013, no winning record in the Big Ten since 2010 and over four years of being unranked in the AP top-25 polls. This was a dying program that needed a spark, and Dosunmu fixed that, even if his freshman year record didn’t reflect it.

Coming off of the worst season since 1975, Dosunmu led Illinois to an incredible nine-win improvement and a second-place finish in the best conference in college basketball behind his athleticism and clutch play. Dosunmu never backed down from the spotlight and consistently nailed game-clinching shots that revitalized the basketball-rich program.

While it’s possible Dosunmu returns to school, as he didn’t sign an agent, he will likely leave Illinois without ever managing to play in the NCAA tournament. Although some believe a Kemba Walker-type performance in March Madness could’ve slingshotted him onto NBA executives’ draft boards, Dosunmu doesn’t think that changes what he can bring to an NBA organization.

Dosunmu, who came back to Illinois with the motto “Unfinished Business,” looks to embark on a lifelong dream of playing in the NBA. Whether it was enduring the freshman year struggles or the thrilling last-second victories, Dosunmu truly was a trailblazer that left coach Brad Underwood and the program in a better situation than when he first arrived on campus.

“We broke a lot of records,” Dosunmu said. “I love what I accomplished. I will go down as a winner, and everyone on this team will go down as winners. When I look back at my first two years, I look at the improvement I made and as a unit. We helped them turn into one of the best programs in the country.”

Quade’s path to this award, although still met with extreme success, took a slightly different route. As a Fort Wayne, Indiana, product, Quade came to a consistent Illinois program that fields some of the most competitive volleyball players in the country, making it potentially hard to stand out right away.

The Academic All-Big Ten athlete found immediate success under her first head coach, Kevin Hambly, as she was named to the Big Ten All-Freshman Team and received the honor of Illinois Athletics Female Newcomer of the Year. Adversity struck quick in her career, however, as her head coach left to accept an offer at Stanford.

“There was a lot of uncertainty, so I think everyone had a slight thought if things don’t work out to find a different place to (play),” Quade said. “I think when they brought Chris (Tamas) in, he was a great fit for most of us. It was an uncertain time, but luckily our administration is great and they bought Chris in.”

Illini fans are sure happy the First-Team All American stayed put, as she led her team to great heights, culminating in a Final Four appearance her junior year. But when teammate Jordan Poulter graduated, Quade showed off her strength as a leader and top talent.

This past season, Quade led the Illini to their third consecutive NCAA tournament berth while once again being named to the All-Big Ten team, and she received an All-American mention.

Quade, who graduated in December, is now living in Los Angeles while attending graduate school at UCLA and playing beach volleyball for the school, a little different than her experience in Champaign-Urbana.

“It was a big culture shock at first,” Quade said about living in Los Angeles. “I’ve been in the midwest my whole life. It’s obviously a lot more crowded. I’m on a campus in the middle of a big city. In Illinois, what’s so special about it is how the community is so involved in the athletic programs which is the coolest thing ever. I feel a little more like an ant (in Los Angeles), but I love it out there. The weather is obviously great.”

For these two athletes, winning an award like this takes years of hard work, determination and faith. Dosunmu, a four-star athlete out of high school, could have taken his talents to a flashier program like Kansas. He could have left the Illini for the NBA after his freshman season, leaving behind a program that probably wouldn’t have had a chance at twenty wins without him. Quade could’ve jumped ship after her coach left the program for Stanford. But they didn’t. These athletes stayed the course and helped carry their respective programs to incredible success that wouldn’t have been possible without them.

While these two are preparing to move on to the next chapter of their lives, both of these athletes appreciate what the University and community as a whole have given them.

“I will miss the University as a whole as a great institution,” Dosunmu said. “They helped me be and taught me to be successful on and off the court. (I) gained relationships with different people that will go further than you ever think and bigger than basketball.”

“Looking back it was such a great experience,” Quade said. “All four years were good in their own right. Just looking back, I’m just really grateful for the people it’s brought me in my life and at the end of the day, getting a really good degree.”