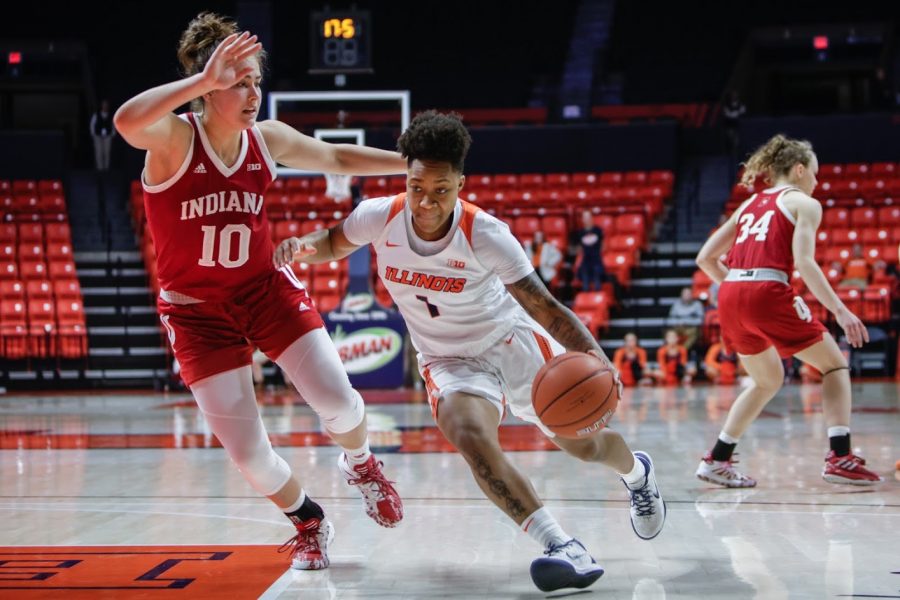 Senior Brandi Beasley drives past a defender during the match against Indiana on Feb. 13 at State Farm Center.

As Illinois moves into Phase 4 of COVID-19 recovery, the Illini teams have begun to make their way back to campus, and the women’s basketball team has started to ease into practice over the last two weeks.

Head coach Nancy Fahey said the team has been communicating over the last several months via Zoom and has built team chemistry before welcoming players back to Champaign-Urbana.

“Over the summer, we’ve had (the) opportunity to do a lot of Zoom meetings,” Fahey said. “We probably talk more this summer because of the Zooms.”

Though the team is back in Champaign, they have been getting acclimated to safety precautions. Basketball is an activity that spreads the coronavirus, so the team has taken extra steps to ensure that the virus is not present in the gym.

Sophomore forward Kennedi Myles said the players are only allowed to practice a few at a time, and each player fills out a symptom checker each day.

“It was split up into groups,” Myles said. “We’re not allowed in the locker rooms or anything, so I mean, (it’s) tedious but (it’s) good that we have a nice structure going on to make sure everybody stays safe.”

Other precautions the team is taking include wearing masks while walking into Ubben and having temperature checks when they walk in. While both junior forward Mackenzie Blazek and Myles said they do not enjoy the swab test, they understand the test is important to be able to return to basketball.

“I’m not the biggest fan of the nose swab,” Blazek said. “I’ll go through the uncomfortableness of the nose swab as long as I can start playing again. So, I think they’re (doing) a great job.”

Fahey said that the team is in voluntary training for the next couple weeks and is implementing social distancing measures when workouts resume. The Illinois coaching staff is focusing on individual skill development this summer as the entire team cannot gather in one spot.

“Individual development of each player is a priority for us right now,” Fahey said. “That’s gonna continue through the season, but (it’s) really heightened during this time during the summer.”

When the team arrived on campus, they had to enter quarantine for several days to be sure they didn’t have the virus.

Now that the team is able to practice with the precautions, they can see each other some more but Blazek said she and her teammates tend to communicate through group chats and Zoom calls to ensure they are maintaining social distance.

“We have a group message and a group Snapchat,” she said. “While we’ve been on campus, once we passed through the quarantine, we’ve done, like, some team hangouts.”

Freshman Aaliyah Nye said that she is able to go for a couple of walks each day and has explored the campus with some of her teammates while social distancing.

“I get to walk around and just look at campus,” Nye said. “It’s been good so far.”

Though the team has been unable to gather and practice with as much flexibility as they have in the past, they are eager to safely get back to basketball.

“Hopefully, we’ll be able to, like, come back and actually play, which is still up in the air,” Myles said. “I think this year’s gonna really be (something) to watch out for.”