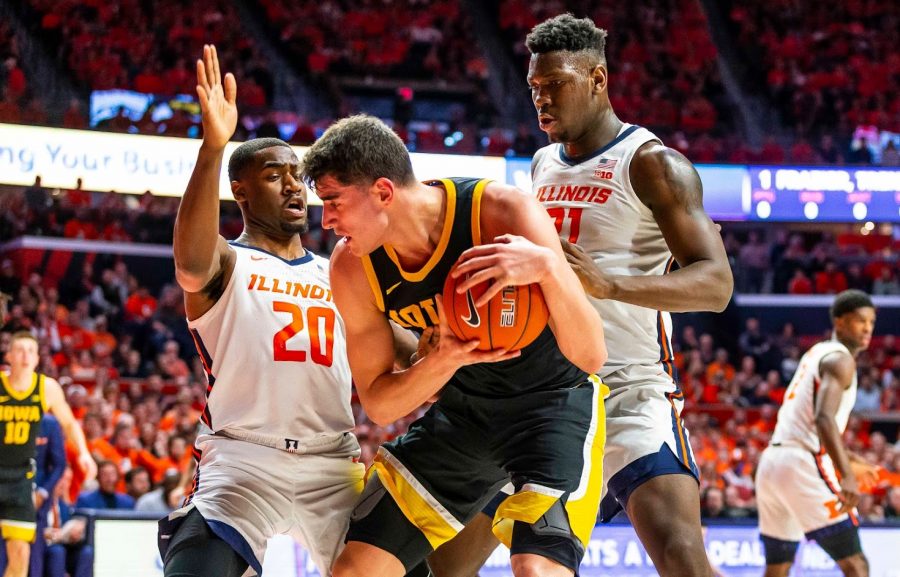 Junior Da'Monte Williams and freshman Kofi Cockburn defend against an opposing player during the match against Iowa on March 8 at State Farm Center.

When Ayo Dosunmu announced his return to Illinois, head coach Brad Underwood suddenly faced a problem. The Illini now have a wealth of guards and limited spots to play them in.

Dosunmu, who spent time at both guard spots last season, returns along with senior guards Trent Frazier and Da’Monte Williams. Underwood also loaded up in the backcourt by bringing in top 30-ranked recruits Andre Curbelo and Adam Miller. Curbelo profiles more as a point guard, while Miller is better suited off the ball.

“The one thing ‘Dre (Curbelo) provides is an elite passer. An elite pitch ahead guy who can really play in the open court,” Underwood said in a Zoom conference Monday. “It gives you tremendous versatility with all three of those guys being able to do things with the ball. Being able to do things in ball screens, being able to get a rebound and push it while the other two get out and run … it’s why I think we can play fast.”

But last season Illinois often played with two bigs on the court, slowing the team down. The Illini had 68.9 possessions per game which finished 272nd in the country, the lowest number for an Underwood coached team since his first year at Stephen F. Austin.

“I’d like to play faster than we did last year,” Underwood admitted. “I think with the addition of guys to our lineup and to our roster … I think we’ll shoot the ball better so I want to play faster.”

Playing faster would suit Dosunmu well, as he finished third in transition points in the nation last season. To play at an increased pace, the Illini may look to more four-guard lineups like they did at the end of last year. When Underwood started Williams over Giorgi Bezhanishvilli at the four, his team went 5-2 down the stretch of the season.

Playing Williams at the four instead of the three could open up time at other guard spots. Incoming transfers Austin Hutcherson and Jacob Grandison could also potentially see time. Underwood has praised Hutcherson’s athleticism, which could help the team get out and run.

“Yes, we can play a guard there. And yes you will see that,” Underwood said. “We’ve obviously had a good amount of success with Da’Monte Williams there. I’m really excited about Jacob Grandison and what he brings at the spot … Coleman Hawkins an elite passer and shooter gives us a different version of that at 6’10.”

With five key returning rotation players, two incoming transfers and two to three impact freshmen, Underwood will have more depth to play with than any team he’s had in Champaign. To see him mix and match lineups, especially early on, would not be surprising. But Underwood isn’t focused on playing time just yet.

“I’m still living off the high of those guys coming back,” Underwood said. “We got a couple of freshmen in there we’re really excited about. Austin and Jacob haven’t worn the uniform yet. I’m excited about the fact that we have a lot of options.”