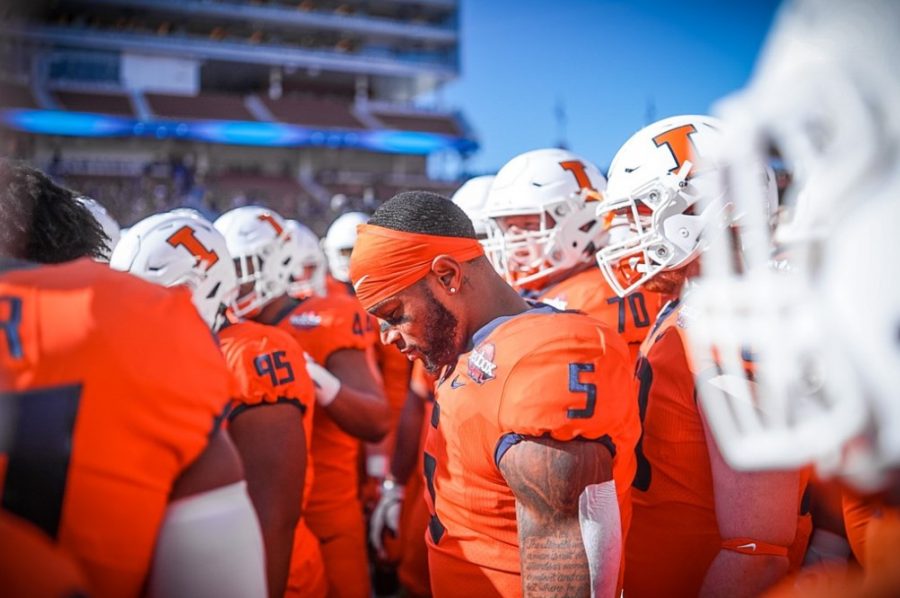 Junior Milo Eifler stands with his teammates before playing in the Redbox Bowl against California on Dec. 30, 2019. Eifler will enter his name into the 2021 NFL Draft.

The senior-only game has recently been played each year in January in Mobile, Alabama, and is seen as one of the first steps toward the NFL draft. Over the past two seasons, the game has produced 93 draft picks, including 10 in the first round. Illinois has not had a Senior Bowl participant since 2017 when outside linebacker Carroll Phillips and defensive end Dawuane Smoot played in the game.

Eifler played in his first season for the Illini in 2019 after transferring from Washington following the 2017 season. Eifler quickly became one of the most feared Illini players on defense after a crushing hit in his first-ever game for the team against Akron. The linebacker started 12 of 13 games last season and immediately emerged as one of the team’s top defensive players. He ended the season with 69 tackles, 10 tackles for loss and a fumble recovery.

Defensive back Nate Hobbs is one of two players on the list who did not come to Champaign-Urbana via transfer and has made an impact since his freshman year. Hobbs has started 30 of 34 games in his three seasons as an Illini and has continued to improve. As a junior, Hobbs collected 67 tackles, 11 pass breakups and an interception, while also receiving All-Big Ten honorable mention.

Receiver Josh Imathorbhebhe transferred to Illinois after playing his first three seasons at USC. The big and athletic senior has received national attention for years after a mind-boggling video of him during a vertical test at the Nike opening combine as a high schooler surfaced throughout social media. Imatorbhebhe played 11 games this past season and led the Illini with 634 yards on 33 receptions to go along with nine touchdowns.

Doug Kramer, the other four-year Illini, is one of the best senior centers in college football. Though undersized, Pro Football Focus rated the strong and quick lineman as the third-best Power-5 center. A team leader and proven piece on the offense, Kramer has started 30 games since his freshman season and could raise his draft stock even more as a senior.

After transferring from Michigan and proving himself capable in his first year with the team, quarterback Brandon Peters looks to have a breakout senior season. Peters missed two games due to injuries last year but still recorded 1,884 yards and 18 touchdowns in the air, as well as 213 yards in three touchdowns on the ground. Being a major reason Illinois reached its first Bowl game since 2014 last season, Peters will have a great line protecting him and great pieces to throw to, which could help the senior significantly raise his draft stock.

With five players on the watch list, the Illini are set up to have their best team of the Lovie Smith era. The Senior Bowl is currently scheduled for January 30, which will most likely get rescheduled. When it is played, however, these Illini will be able to showcase their talents in front of scouts in hopes of making it to the next level.