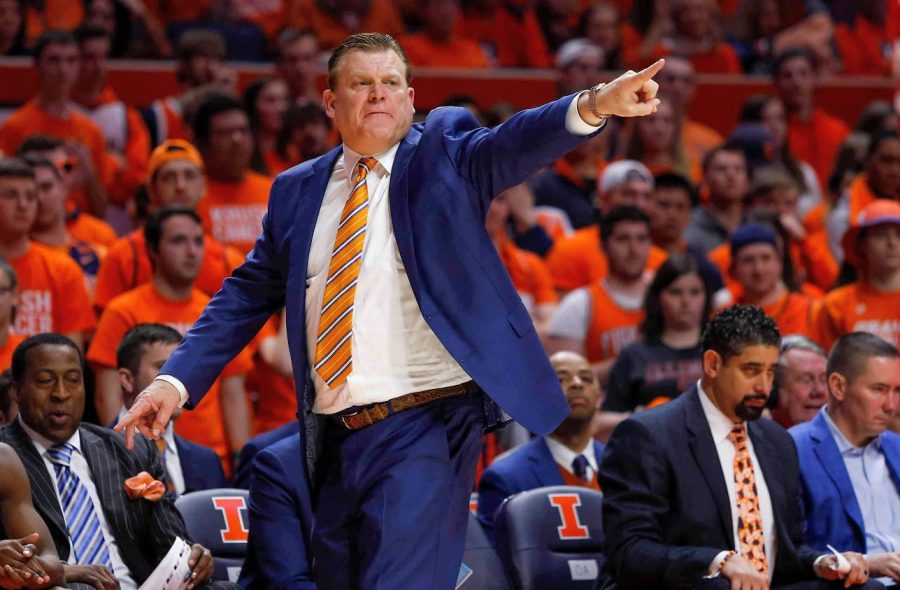 Illinois basketball coach Brad Underwood points toward the court during the game against Nebraska at the State Farm Center in Champaign on Feb. 24. Though the Illini have been successful on the recruiting trail, two top 2021 targets, Brandon Weston and David Jones, committed elsewhere.

Illinois head coach Brad Underwood and his staff have had a very successful run on the recruiting trail. They secured one of the top 2020 classes in the Big Ten and locked in sharpshooter Luke Goode for 2021.

The program endured a rough stretch, however, when two top 2021 targets, Brandon Weston and David Jones, committed elsewhere on Sunday and Monday.

Weston, ranked No. 63 by 247Sports, had the Illini in his final six. He spent the past two seasons playing at Morgan Park High School, the same school that produced current Illini Ayo Dosunmu and Adam Miller. Given those connections, the Illini appeared to be in a good position to land the 6-foot-5-inch wing. A week earlier, Illinois made Weston’s final six, which also included Seton Hall, Wake Forest, Western Illinois, Michigan and Pitt. However, Weston elected to play for Seton Hall, which is closer to his native home of New York.

The Illini also appeared to be in a good spot for Jones who is ranked No. 91 by 247Sports. 247Sports national basketball analyst Brian Snow even put in a crystal ball prediction for Jones to go to Illinois last Friday. But at the last second, DePaul swooped in and ultimately won Jones over. The Blue Demons had not offered the 6-foot-6-inch wing a position until Aug. 22.

The Illini already have one 2021 wing in Goode but are clearly looking to add another. They are still in the mix for four-star wing Jordan Nesbitt and made the final nine for Bryce Hopkins, the 33rd-ranked player in the country. But all crystal ball predictions for Nesbitt point to Saint Louis, and Hopkins holds offers from elite programs like Kentucky, Oregon and Indiana.

Adding guard and wing depth for the future is clearly a priority for the Illini. Trent Frazier and Da’Monte Williams graduate after this season, and Dosunmu could potentially bolt for the NBA. As of right now, they do have Austin Hutcherson, Jacob Grandison and Goode to fill out those spots. The backcourt of the future appears to be set with Andre Curbelo and Adam Miller.

With Goode in the fold, the Illini only possess one open scholarship for 2021. But in the case Dosunmu and sophomore Kofi Cockburn dash for the NBA, two more will open up. They are recruiting a pair of 2021 four-star centers in Franck Kepnang and Micawber Etienne to potentially replace Cockburn.

If Underwood misses out on both Hopkins and Nesbitt, which appears likely at this point, there aren’t a plethora of 2021 wings left. They are recruiting 6-foot-5-inch three-star Rafael Pinzon, who played high school ball with Curbelo. The staff could also go the transfer route, whether it be from another college or a junior college. Grandison, Hutcherson, Andres Feliz and Adonis De La Rosa are all players Illinois has snagged in the transfer market.

The past few days are certainly not the high point in recruiting for Illinois, but it’s no time to panic. Curbelo, Miller and Goode are a strong foundation to build around, and this staff has shown the ability to recruit well. Players typically like to play for teams that excel, so if the Illini can reach the heights they are supposed to in 2020-2021, that should help them in the long run.