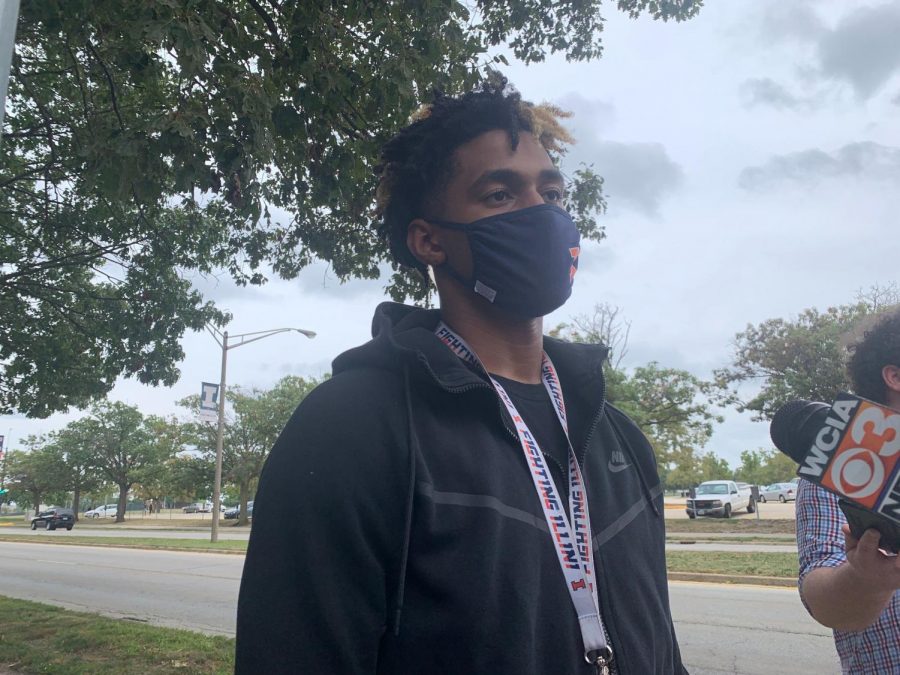 Illini freshman guard Adam Miller speaks during an interview outside of Memorial Stadium after the athlete-led protest on Monday.

Adam Miller showed up to the Illinois athlete-led protest on Monday evening at the last minute. The highly-anticipated Illini freshman guard was out of town earlier that day but knew how important it was for him to attend the march.

Miller has voiced his support for Black lives on his Instagram and Twitter accounts, which have about 115,000 and 12,100 followers, respectively. Being a five-star basketball recruit, Miller has had eyes on his every move for years now, giving him even more reason to speak his mind.

“Some people are like, ‘watch what you say,’ but it’s those talks, even with my grandma as a little kid,” Miller said Monday evening.  “She was like, even if you get detentions, that’s prison. She knew I wasn’t going to prison, but as a Black man in this country, it’s so much harder for you to be successful and it’s so much harder to be normal. So, everything you do, you have to make sure you’re doing it the right way. You have to be better than the next one.

“I feel like everybody should have equal rights so I’m not afraid to say anything. Martin Luther King did it and he wasn’t afraid. Malcolm X did it and he wasn’t afraid. So, I think it’s our time to come around and I’ve never seen anything like this, even in the history books. You see a lot of movements and protests, but this, this is different and I’m just glad to see everyone out here.”

Miller believes change can happen, but it won’t start or end with this generation. To see fellow students, athletes, coaches and even parents of all races marching on Monday was one of the most meaningful parts of the protest.

The Morgan Park product is also thankful the conversation of racial injustice and police brutality is being brought up more frequently. Miller said the nation’s recent events have even been talked about in his classes over the past week.

“It’s bigger than any one of us out here,” Miller said. “George Floyd died for this, Breonna Taylor, Jacob Blake. There’s so many people who have lost their lives to police brutality in this country and I think it’s time for an end. Even if we can’t do it with this generation, maybe we can do it with the next. If we push their power and just get the message out there so every kid that sees this is like, ‘oh, this is what’s happening, OK we’re gonna change this when it’s our time to come around.’”

Miller’s time to make a change, though, is right now and he is prepared to continue his fight even while on the basketball court.

The recent NBA and WNBA strike, however, forced Miller to think if college athletics really should be competing while the rest of America is facing a social justice battle.

“I thought about it and I was like, ‘man, maybe we shouldn’t play sports,’” Miller said. “But then I was like, ‘nah, I’m going to keep doing what I’m doing, pushing my message.’ I’m gonna keep playing basketball, keep going hard. We’re gonna keep playing basketball here, keep working out and preparing for the season. And as we’re playing in the season, we’re gonna keep pushing the Black Lives Matter movement, and I feel like that’s the best thing to do.”

When sophomore Illini center Kofi Cockburn spoke with the media last week, he indicated the team had been very vocal about sharing their opinions and learning from each other’s perspectives. Miller echoed that sentiment, saying the team stays very active in its group chat.

What has impressed Miller more is the support from the highest levels of the athletic department, specifically athletic director Josh Whitman.

“One of my proudest days as AD,” Whitman tweeted after the protest Monday evening. “Today, I watched tomorrow’s leaders take a knee and then stand tall. Our #ILLINI family found its voice & used its platform to make a difference. Our future is bright in their hands. Honored to be included & to be associated with them.”

Head basketball coach Brad Underwood and assistants Chin Coleman and Orlando Antigua also joined Whitman and several other Illini coaches in marching with the athletes. To Miller, that unity makes him proud to be at Illinois.

“It meant everything to me,” Miller said. “It shows they care. It’s not like we’re here just for basketball. They care about us as men and about our lives. All our coaches were out here; it’s just amazing. I’m just glad we’re seeing change. You can be as mad as you want about the situation but peace is the only thing that’s going to come forward and help us better this country.”