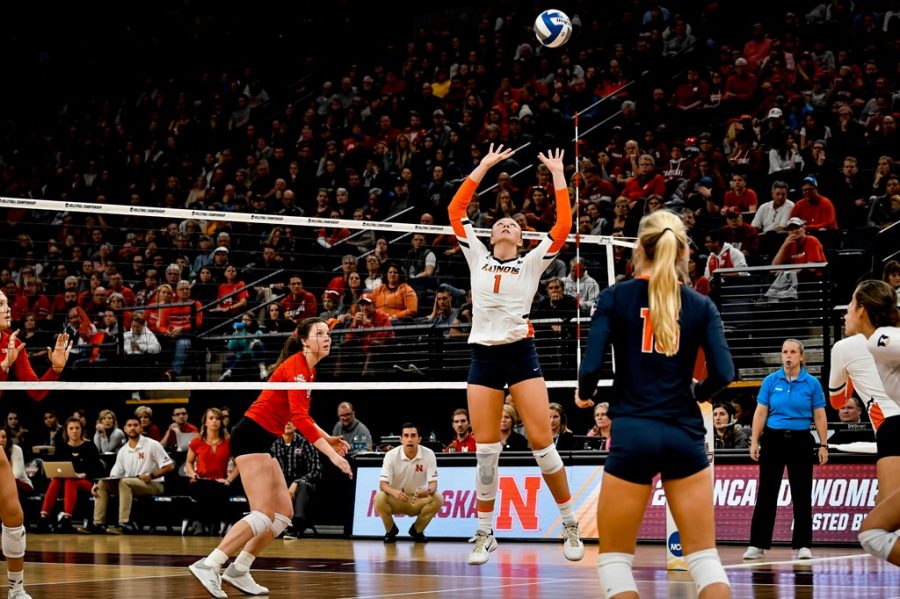 Former Illini Jordyn Poulter sets the ball during the Final Four match against Nebraska on Dec. 13, 2018. Although the Big Ten and Pac-12 conferences were canceled this fall, the NCAA still plans on holding a tournament in the spring comprised of Power-5 conferences.

Volleyball, along with all other fall sports, has come to a halt in the Big Ten and Pac-12.  The three other Power-5 conferences, however, plan for sports to continue. Though the women’s volleyball national championships have been pushed to the spring of 2021, there is now the possibility of a season occurring without all five conferences competing.

A significantly smaller field would be almost unprecedented in recent years, which begs the question as to how legitimate a national championship would be without including over two dozen teams from the Big Ten and Pac-12. While it’s impossible to know exactly how different the upcoming season may be, there are plenty of metrics that can be used to make an estimate.

One angle is the players themselves; last season, there were 21 All-Americans named across the three teams from the Big Ten and Pac-12, taking up half of the available spots. On the first team alone, there were seven Big Ten or Pac-12 players.

Although some of these players were graduating seniors, many are top-tier players that would have to sit on the sidelines. Without Big Ten and Pac-12 players, there may be a much easier path to the championship for those who do play. One example would be Wisconsin’s duo of Dana Rettke and Sydney Hilley, both of whom were first-team All-Americans last season. They’re both seniors this year and have the talent to compete not only as individual stars but also cohesively on last season’s second-place team.

Another way to look at a smaller field is from the macro perspective of considering the impact of all the teams that may be lost; Big Ten and Pac-12 teams have factored in heavily toward the national championship in recent years.

Last year alone, Big Ten and Pac-12 teams made up three of the final four teams in the national championship bracket. Overall, they accounted for 13 of the 64 teams, but even that metric undersells just how impactful they were. Big Ten and Pac-12 teams made up a majority of the remaining teams as far back as the quarterfinals, accounting for six of the final eight teams in the bracket.

Zooming out even further, the Big Ten and Pac-12 have averaged 15 teams qualifying for the national championship bracket over the past few years, including having three of the top four teams in each of those years. Most importantly, the national champion came from the Big Ten or Pac-12 in each of the past three seasons. Even at the highest level of competition, the Big Ten and Pac-12 have always been in the middle of the action.

All things considered, there would be such a high number of teams missing from the national championship to the point that, at least in regard to competing, it would be nearly impossible to justify the tournament as legitimate in terms of difficulty.

One final viewpoint to consider a smaller national championship from would be the loss of major narratives heading into the season. Potentially the largest question mark heading into this season was going to be if two-time repeating national champion Stanford could continue its winning streak despite the graduation of many of its best All-American players. If the season is played without the Pac-12, Stanford wouldn’t even be given the chance to defend its title.

Stanford’s situation is far from the only narrative that would be missed; Illinois itself is in quite a unique position. Although the Illini made the Final Four just two years ago, last season was a major disappointment; though Illinois made the tournament, it was upset in the first round by Utah.

Since the team’s apex, staples of the roster, such as Jordyn Poulter and Jacqueline Quade, have graduated. This season would have provided a chance for some of the back-end talents on Illinois’ deep roster to step up and fill the void left by stars of the past. Players like Megan Cooney, Ellie Holzman and Mica Allison were primed to break out if they had the opportunity.

With such a dominant history of teams going deep into the national championship, Stanford and Illinois only scratch the surface of those that will be missed, while teams like Nebraska and Wisconsin also had incredibly compelling narratives surrounding their potential to contend this season.

No matter what happens going forward, volleyball is bound to be different when it comes back. Under normal circumstances, the Illini would already be competing in matches. While a national championship without the Big Ten and Pac-12 would not be nearly as competitive as normal, there is still no guarantee as to whether a spring championship will occur without them.

The NCAA certainly knows just how much the Big Ten and Pac-12 factor into national championship competition, so the loss of the two conferences may have factored into the decision to postpone until the spring. Like it or not, only the future knows if or how there will be a 2020 — or 2021? — women’s volleyball national champion.