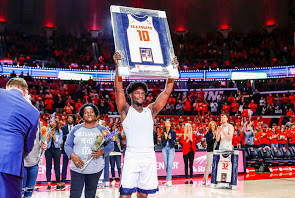 Recent graduate Andrés Feliz hoists a frame containing his jersey during Senior Night before the game against Iowa at State Farm Center on March 8. Feliz has left big shoes to fill after he graduated in the spring.

In the second half of the game at Iowa last season, Hawkeye’s star center Luka Garza grabbed a rebound and was moments away from starting a Hawkeye fastbreak. That was until 6-foot-2-inch Illinois guard Andrés Feliz snuck in and ripped the ball away from Garza, finishing a lay-up and giving a boost to the Illini bench.

The Illini would go on to lose the game, but hustle and energy plays like that emphasize what Feliz brought to the Illini in his two years in Champaign. He was a gritty, hard-nosed defender who had a knack for rebounding despite being undersized.

Offensively, Feliz was a unique player. Despite being a guard, he was essentially a non-shooter at 27% from three. Yet, he still managed to average double figures with his herky-jerky dribbling game and soft touch around the rim. He excelled in transition (58th percentile), and as a pick-and-roll ball-handler (81st percentile). While the Dominican Republic native wasn’t the perfect fit next to Ayo Dosunmu, he was what every good team needs: a glue guy.

Filling the unoccupied energy role left by Feliz will be key this upcoming season for Illinois. Head coach Brad Underwood deploys plenty of guys who can score the ball, but someone has to emerge as the piece that holds everything together. Senior Da’Monte Williams appears to be a player who could take that leap. Like Feliz, Williams struggles as a shooter. But, he’s Illinois’ best and most versatile defender. Williams will have to be a more active rebounder to match Feliz’s five boards per game.

Feliz’s graduation was coupled by the fact that rising junior wing Alan Griffin elected to transfer from the program in March. Like Feliz, Griffin was a high-energy player who brought a huge spark off the bench for Underwood’s team. Despite playing 18.1 minutes per game, Griffin’s advanced stats are off the charts. He was second in the country amongst all underclassmen with a +11.3 box plus/minus, trailing only National Player of the Year Obi Toppin.

Griffin was essentially the perfect fit next to Dosunmu. A prototypical three-and-D wing, he led the Illini in three-point shooting at 41.6% on four attempts per game. He too

was a terrific rebounder at 4.5 per game.

Replacing Griffin will also not be easy. His advanced numbers are nearly irredeemable, but senior guard Trent Frazier could be that shooter. His sophomore season, he shot 40.6% on six attempts from deep, but his numbers dipped last season, regressing to 30.9%.

The candidate most likely to be in a role similar to Griffin’s is transfer Austin Hutcherson. A 6-foot-6-inch wing, Hutcherson sat out last season after transferring from Division III school Illinois Wesleyan. His sophomore season at Wesleyan, Hutcherson led his conference in scoring at 20 points per game on 39.2% shooting from deep. Underwood has also praised Hutcheron’s athleticism this offseason.

Elite basketball teams possess dynamic scorers like Dosunmu and dominant big men like Kofi Cockburn. But role players are also key. An energy and glue piece like Feliz and a three-and-D wing-like Alan Griffin can make a good team great. The Illini have the star guard and big, but collectively the group will need to replicate what Feliz and Griffin brought to the table.