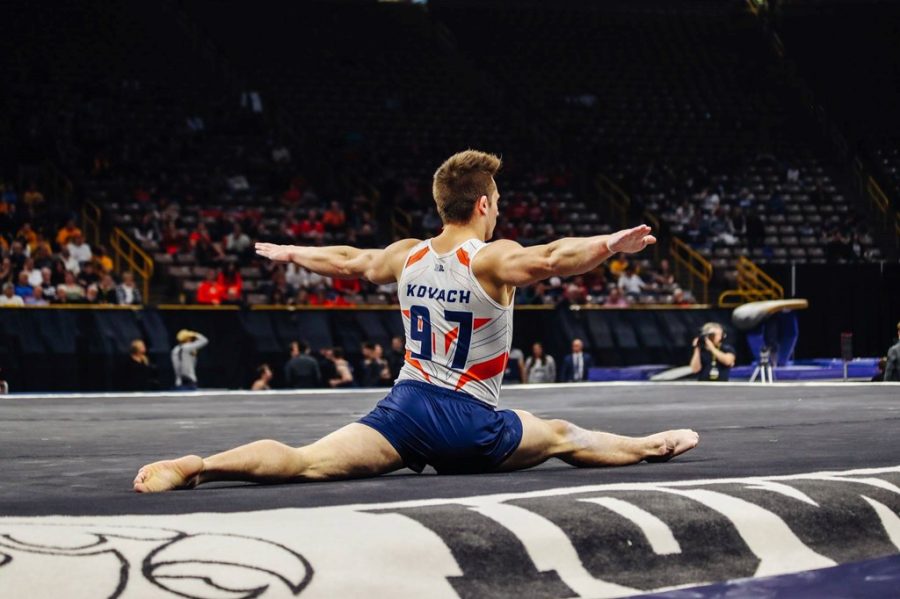 Redshirt junior Jordan Kovach competes at the Men’s Gymnastics Big Ten Championships on April 6, 2019. Kovach and the Illini have recently resumed practice for the winter season.

The Illinois men’s gymnastics team restarted team practices in Kenney Gym on Aug. 31. This marks the first time since March the gymnasts not only practiced together but even used their Urbana training and practice facility.

Under normal circumstances, the team would have remained on campus throughout the summer to practice and improve their routines for the next competitive season. At the same time, the incoming freshmen would’ve moved to Champaign-Urbana to join the team and start their collegiate careers. Instead, because of the COVID-19 pandemic, the gymnasts spent the summer spread out across the country. Most, if not all of them, practiced and trained out of the gymnastics clubs they competed at prior to college.

Even though there are over three-and-a-half months until competitions are expected to begin, the loss of summer practices is a setback the team faces approaching its third week of practice.

“If you’re trying to be ready with an upgraded routine, you need to be learning those upgraded skills all year round,” said head coach Justin Spring. “Our guys are in (the gym) the week after NCAA championships working on upgraded skills. Starting practice when we did, we missed the entire phase of upgrades. Now we’re frantically trying to get our routine construction back all the while hoping for an opportunity to create a skill here or there so we can be a little more competitive.”

In addition, the team also has to take time away from its routines in order to get back into shape. For nearly two weeks after returning to campus, the team had to wait for permission to use Kenney Gym, during which the team was unable to practice or train. This subsequently took a toll on the gymnasts’ bodies. According to redshirt junior Jordan Kovach, the current goal is to get the team back into shape.

“In the three years I’ve been here, we’ve never had to take time away from practices to get back in the swing of things. Usually, everyone’s already in shape,” Kovach said. “We’re going to take as much time as possible to get everybody back into shape and then, hopefully by the end of this month, everybody will be back on schedule.”

Since returning to campus, the gymnasts have been under a series of strict protocols to ensure they remain healthy and able to continue practicing. They are being tested for COVID-19 every other day and according to Spring, the goal is to transition to daily testing in the future. They are under strict supervision by Spring, his assistant coaches and the DIA to ensure they are complying with guidelines and mandates set by the CDC, the IDPH and University Chancellor Robert Jones. Upon arrival to practice, the gymnasts have their temperatures and pulses checked.

During practice, the gymnasts have to maintain social distance and wear a mask up to the point they are about to perform on an apparatus. After they are done performing, they have to wipe down the equipment that gets used.

In addition, the full team roster is broken into five or six groups based on which gymnasts are living together, and each group is assigned a 45-minute session for each event. They are not allowed to leave the event any earlier or later than the allotted 45 minutes.

“That’s been a little tough. Personally, I like to bounce around the events pretty quickly,” Kovach said. “But I really like how we’ve been working out with the guys that we’re living with.  In the gym, I think there’s a little more comfort level with the guys that you’re in rotation with.”

For Spring and his gymnasts, they’re willing to follow whatever protocols are necessary in order to continue practicing in preparation for the 2021 men’s gymnastics season.