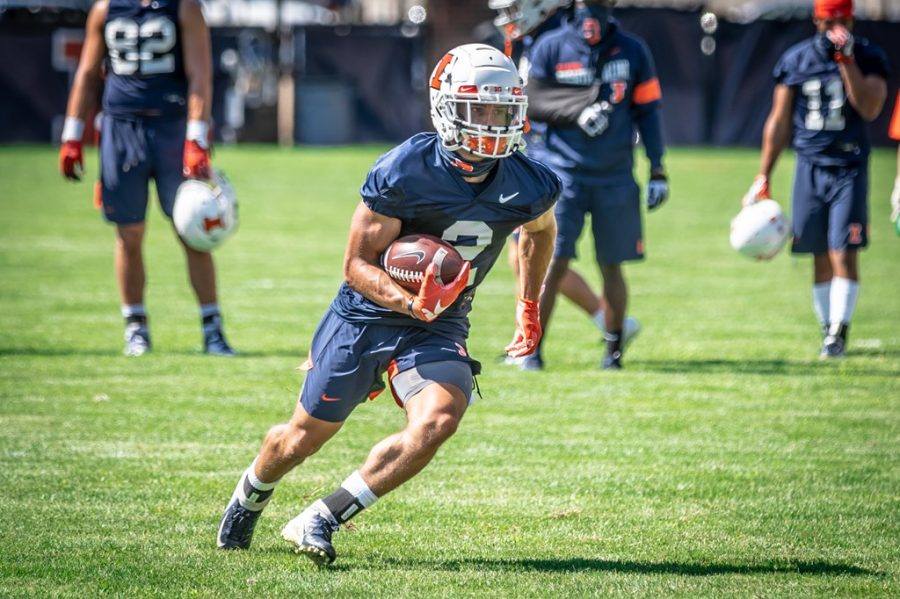 Sophomore Chase Brown runs with the ball during football practice on Aug. 7. On Wednesday, the Illini practiced with full pads for the first time since the Redbox Bowl on Dec. 30.

The Illinois football team hasn’t put on the pads since the Redbox Bowl on Dec. 30. The Big Ten’s restrictions over the summer limited the teams to workouts and just before training camp kicked into full gear in August, the conference postponed the football season. On Wednesday, nearly two weeks after the conference reinstated football, the Illini practiced in full pads.

“It feels great, I’ve been itching to put on pads,” said senior defensive back Nate Hobbs on Monday. “We’ve been in Spiders and helmets for as long as I can remember, like months. So it feels great to get out there and put them on.”

The Illini practiced a few times in August but were forced to stop after the Big Ten halted fall sports and anticipated a spring season. Due to COVID-19-related medical developments, including conference-wide antigen testing and extensive cardiac screenings to detect myocarditis, the conference’s presidents re-voted to begin the football season on Oct. 24.

While the Illini won’t have a normal training camp before they kick off at Wisconsin in less than four weeks, both head coach Lovie Smith and Hobbs said they don’t need one. The team has used the extended practice time valuably, focusing on improving all three phases of the ball and making each detail count.

“I think most coaches would say they would like more time to teach and to be able to teach where you’re not rushed,” Smith said. “It seems like every year I’ve been coaching before you go into the first game, there’s never time. We’ve had a lot of time, so many walkthroughs. What we’ve been concentrating on is seeing where some of our younger players are athletically and from there, installing our systems, offense, defense, special teams in detail.”

Smith and the Illini added several transfers and freshmen in the offseason, but this season’s team will still rely on the veterans. The weeks leading up to training camp gave young players more time to find their footing at the collegiate level, but the level of the experience will speak for itself come game time.

“Our preparation has been a lot more geared towards eliminating a lot of those first game inexperienced mistakes that you make,” Smith said. “Starting off with, we’re a senior ball club. We have guys that have played a lot of football, so you expect to not be where we were two, three years ago and we’re not. We’re farther along.”

“We all talk about this should be our best football team based on who we have and what we’ve seen from the guys daily.”

More practices don’t necessarily mean better production at this level. As a coach, Smith said it can be easy to want to scrimmage every day, but that physicality can lead to players breaking down before the first week of the season. Smith said the Illini have avoided that mentality in practice, focusing on “good teaching reps.”

When Oct. 24 rolls around, Smith and Hobbs feel the team will be ready to face No. 19 Wisconsin in Madison. The tension between Illinois and Wisconsin will be a factor, as the Illini upset the No. 6 Badgers in Champaign last season. On paper, it would seem unlikely for the Badgers to let a repeat of last season happen on their own turf. But, with no previous 2020 tape on either of the teams, the game will come down to strictly performance in Week 1.