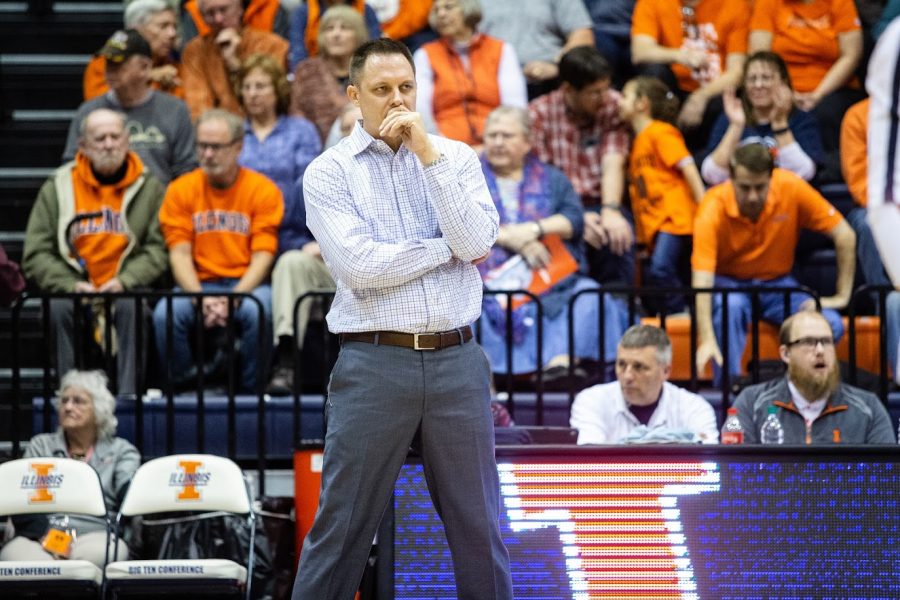 Volleyball head coach Chris Tamas watches from the sidelines during the game against Penn State on Nov. 15. Tamas remains optimistic about the extended offseason and the opportunity for new player improvement.

On Sept. 21, the NCAA Division I Council approved pushing the volleyball season to the spring, with a regular season start date of Jan. 22 and a 48-team postseason tournament rather than the typical 64. While many players and fans were disappointed to have the season flexed to the spring, the extra time to practice and prepare could be beneficial for a young Illinois roster in need of developing chemistry.

If there had been a fall season, the team was likely to look raw due to roster turnover and a lack of practice time. Typically, the team practices throughout the spring, and summer practice begins in June. This year, spring practices were cut off when Illinois students were sent home in March and summer practices began about a month later than usual.

“We’ve always had the mantra that we’re going to get better every day and take it one day at a time,” said head coach Chris Tamas. “Happy that we have the time to train because we’re replacing five starters from last season, and we’re trying to get to know each other better.”

Tamas is optimistic about the benefits of an extended offseason, given the chance freshmen have to improve and see more playing time.

“Sometimes with freshmen, the toughest part is to get used to the speed of our game in a short period of time,” Tamas said. “Usually when we start, we have a fall camp. When we start the season, we only have 18 practices from our first day of practice to our first match, so I think it does help for freshmen getting adjusted. For sure, it could help their chances of seeing court time.”

With the announcement of the postponed season, Tamas has begun treating team practices like offseason practices. By NCAA rules, the team is only allowed to have 132 “full” practice days throughout the season, so Illinois is now saving those days for when they are closer to the season.

When the team is using “full” practices, they are allowed 20 practice hours per week. Outside of those weeks, there is an eight-hour cap on practice hours, which is what Illinois is currently doing. According to Tamas, they spend four of those hours on strength and conditioning and four on the court. Tamas plans to resume full practice hours in either November or December.

Even with reduced time each week, junior defensive specialist Taylor Kuper believes the longer offseason will help the team come out sharper.

“Especially with this offseason, we have more time to tinker with the little things,” Kuper said. “When the freshmen come in and we have a month with the coaches — by that time it’s just go play. We’re in competition mode. Now we get everyone to get on the same page, what technique to use, what Illinois volleyball does. In a way, I’m even more excited for this season to see what the extended preparation does for us.”

For Kuper, the “little things” have meant breaking down individual plays to their minutia. With so much time, she has been able to sit down with her teammates to discuss and practice exact angles the ball should be passed at.

While there has been excitement within the team regarding the announcement of their season, there are still many questions and concerns regarding logistics in a world with COVID-19. For starters, volleyball may follow other college sports and only play conference opponents, which could have major implications for Illinois.

Due to how strong the Big Ten is, Tamas feels a conference-only schedule wouldn’t harm them as much as it would for teams in weaker conferences. With only 48 teams being selected for the tournament this year, this could be a crucial advantage for Illinois.

Beyond just the schedule for this season, there have been concerns about playing a spring season and a fall season back-to-back in 2021. While every season can be both mentally and physically taxing, Kuper and Tamas have expressed little concern over the issue.

“I think we’re (more of) a year-round sport anyways,” Tamas said. “Even though we have ‘time off’ usually in May and again in December, we’re touching a ball throughout the whole year. We don’t quite see as many impact injuries as maybe football would. Obviously, we have to be in shape, but we’re not a cardio sport either.

“(We’re) kind of a weird hybrid between strength and conditioning, so as long as we’re in shape and in good health, I don’t see a concern of trying to go from one season to the next in a short period of time.”

Regardless of how the specifics play out, the announcement of dates for the season has meant a collective sigh of relief for Illinois players and coaches alike. With Jan. 22 marked on everyone’s calendar, there’s finally a start date to work toward.

“It’s more time to work on things that maybe we don’t get the time to,” Kuper said. “It’s really exciting to see everyone growing in the game. It’s exciting to see me grow in the game because I love this game and I want to be the best I can be for this team, so to have the time to really work on that, honing on certain skills, it’s just really exciting.”