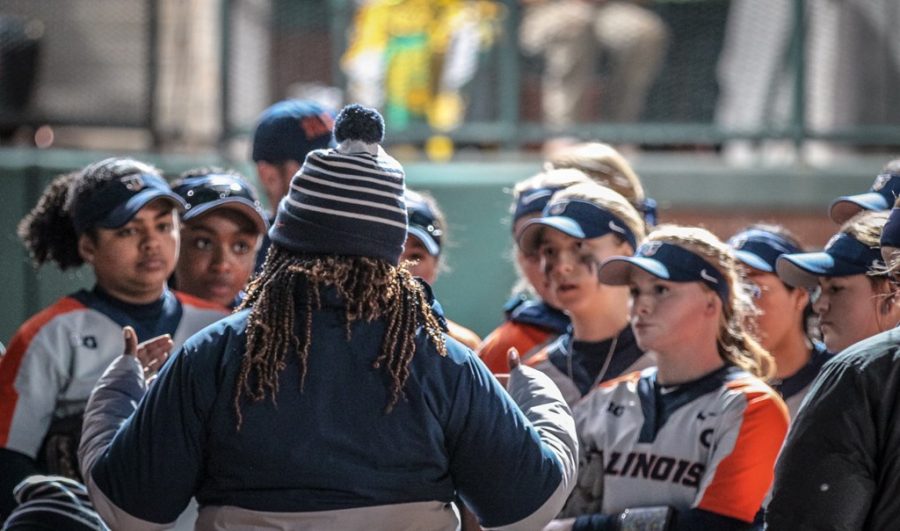 Illinois head coach Tyra Perry speaks to her team during the game against Baylor on Feb. 21. Perry is pleased all of her starters are returning from last year.

Lights-out pitching and timely hitting made the Illinois softball team competitive last season, as they finished the coronavirus-shortened season with an 11-11 record. While the team had its ups and downs — losing five out of seven games in the middle of the season— Illinois has an advantage this season: experience.

Returning virtually all of their production from last season, only losing two backup seniors to graduation, the Illini look to take the next step forward as a program and compete for a Big Ten championship.

The Illini resumed practice four weeks ago and it has gone smoothly. But this year, the Illini aren’t immune to the “new normal.”

“We started out really slowly,” said Illinois head coach Tyra Perry. “There were a lot of masks, social distancing. But after a two-week period, we were able to slowly unwind. But we have kept our players in groups of about eight to 10.”

Throughout the country, the NCAA and conferences have had to make tough decisions regarding how seasons will look. For football, shortened and conference-only schedules became a popular alternative, while the NCAA has postponed most fall sports to the spring. Coach Perry, though, hasn’t received the official word yet.

“Those particular areas are up for discussion,” Perry said regarding whether there will be a postseason or non-conference schedule. “We, as Big Ten coaches, meet and give our recommendations according to the guidelines we feel are in place.”

Regardless of when and where the Illini play, Perry can rely on at least one thing: starting pitching.

Both of the Illini’s top starters, juniors Addy Jarvis and Sydney Sickels, are returning from last season looking to replicate the same consistency and, sometimes, dominance.

Jarvis, who transferred from Youngstown State last season, transitioned to Big Ten play with ease, finishing the season with a 2.42 ERA, three complete games and six wins. While Jarvis was smooth sailing, Sickels may have had an even bigger presence with a 2.38 ERA, 82 strikeouts and five saves, which showcased her versatility.

While the pitching duo shut down opposing offenses regularly, their records didn’t reflect their talent, as neither had a record over .500. The lack of wins, however, could be attributed to the Illini’s lineup that struggled to find consistent run production.

Out of the 22 games played last season, Perry’s lineup scored two runs or less 13 times while finishing the season with a team batting average of .226. But the lack of results could be explained by some context.

The Illini were incredibly young last season, playing zero seniors. Also, the team did only play 22 games before the weather or the bats started heating up. Just getting a full season could do wonders for the team.

“We have a lot of returners who have seen significant time,” Perry said. “Returning-wise, we have (sophomore) Delaney Rummell, who played third base for us last year. She had a great start in a shortened season, so we expect to see a lot more from her as well. She’s a power hitter. She has power potential. She also kind of hits for average, which is the dream, right?”

Rummell led the team with five home runs while starting every game. The Gilberts native showed her youth and struggled down the stretch, finishing with a .194 batting average. Still, Perry saw a good enough sample size to have faith in her ability.

Returning all of her starters usually makes a coach feel fantastic about an upcoming season, but Perry isn’t ready to hang the Big Ten championship banner yet.

“I think it will, but it’s just so strange and different because of COVID,” Perry said. “We’ve all been in a survival and protection mode. I think a few more practices and getting into the season will start to see things click.”