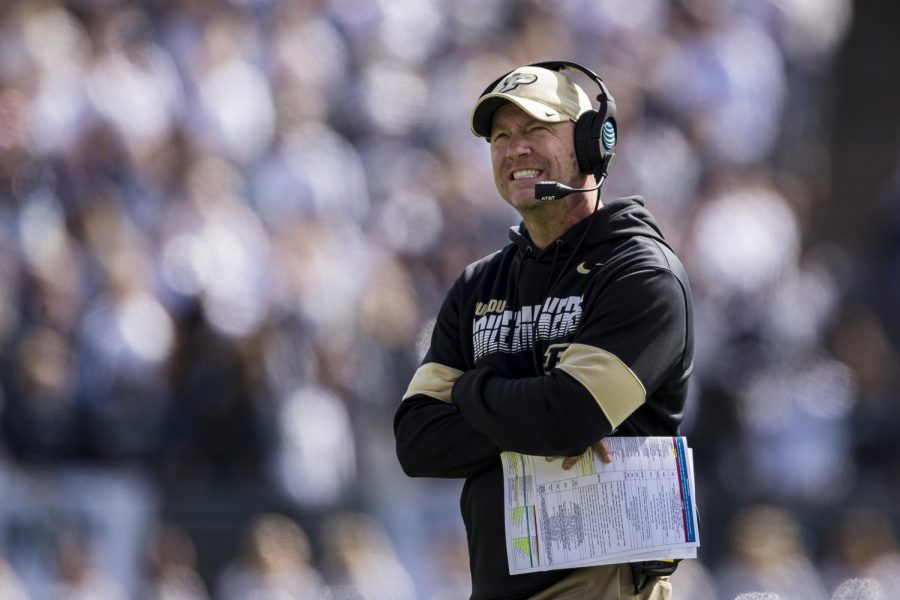 Purdue head coach Jeff Brohm looks on during a game against Penn State at Beaver Stadium in State College, Pennsylvania, on Oct. 5, 2019.

The final week of college football without the Illini and the Big Ten saw two top-five teams fall, which could have major implications for Big Ten teams aiming for a college football playoff berth. With Illinois 23.5-point underdogs at No. 14 Wisconsin on Friday, this week in college football once again proved that anything is possible. Let’s take a look at how teams in the Southeastern Conference, Big 12 and Atlantic Coast Conference fared this week.

In arguably one of the most anticipated matchups of the season when schedules were initially released, No. 2 Alabama took on No. 3 Georgia in a potential college football playoff preview. In a rematch of the 2018 national championship game, the Bulldogs were unable to exact their revenge, falling 41-24 to the Crimson Tide, who cruised to victory behind quarterback Mac Jones’ four touchdowns after trailing at halftime. The loss sent Georgia to fourth in the Associated Press poll, though Alabama cemented its place at the No. 2 position.

The game with the biggest playoff implications for Big Ten teams was then-No. 5 North Carolina’s loss at the hands of Florida State. The Tar Heels trailed by as many as 24 points at halftime before their comeback ultimately fell short, finishing 31-28. The loss sends North Carolina down nine spots in the AP polls to 14th in the nation.

Notre Dame continued its undefeated start to the season, though they only barely squeaked by Louisville at home, 12-7. The Fighting Irish only managed to score one touchdown and relied on their defense to make stop after stop on the opposite of the ball. Though they only managed to beat the 1-4 Cardinals by five points, Notre Dame climbed to No. 3 in the most recent AP poll.

Clemson showed why it’s the No. 1 team in the country and one of the national championship favorites in a 73-7 blowout win over Georgia Tech. The Tigers, who haven’t lost an ACC game since 2017 and have won their games this year by an average margin of over 36 points, have yet to be challenged this season. Their first true test comes against Notre Dame on Nov. 7. Clemson quarterback Trevor Lawrence also bolstered his Heisman Trophy resume with 404 yards and five touchdowns in the win.

In off-the-field news, Purdue head coach Jeff Brohm announced he has presumably tested positive for COVID-19 just one week before the Boilermakers’ opening week matchup with Iowa. Purdue is set to travel to Champaign on Oct. 31 to play Illinois. After Alabama head coach Nick Saban tested positive on Wednesday and returned just four days later for the team’s win over Georgia on Saturday, it is seemingly possible that Brohm could be on the sidelines on Saturday. Big Ten guidelines do not cover the protocol in the event a coach tested positive for coronavirus.