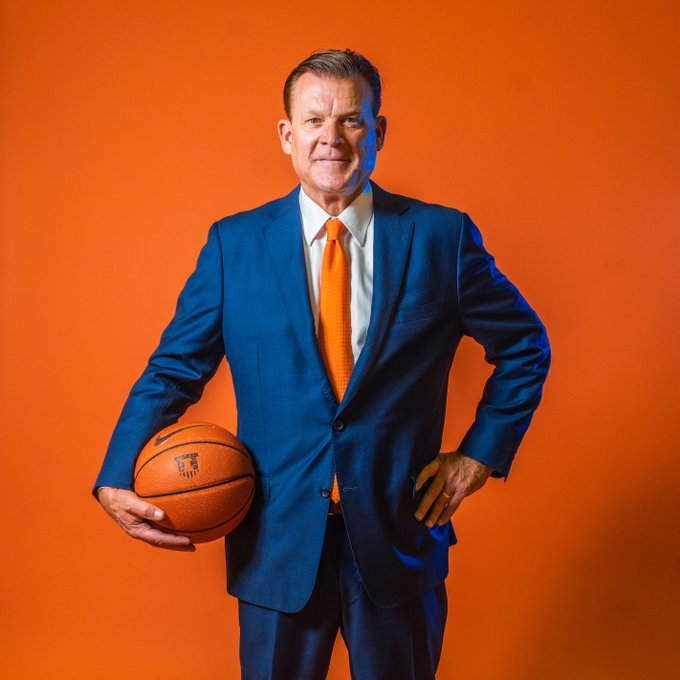 Illinois head coach Brad Underwood poses with a basketball. The team is currently struggling to create a non-conference schedule.

Among the many challenges college basketball programs are facing entering the 2020-2021 season, creating a non-conference schedule is right at the top of the list. And thus far, Illinois men’s basketball head coach Brad Underwood and Assistant Athletic Director Joey Briggs have felt those challenges.

“There’s been nothing like it,” Underwood said. “It’s truly COVID, 2020, unprecedented like so many things are. We don’t have a lot of answers. We have a ton of questions that have to be answered.”

In a typical season, Illinois would play 11 non-conference games across the country and 20 conference games. This season, the NCAA announced teams would be limited to 27 games, including one multi-team event (MTE). Due to these restrictions, the Illini have already had to adjust their schedule. They are no longer in the Emerald Coast Classic, a four-team MTE in Florida. Their home series with Arizona was postponed a year and the annual Gavitt Games between the Big East and Big Ten have been canceled for this season.

“We don’t have a schedule yet — that’s not a secret,” Underwood said. “We have had some teams that we’ve reached out to. As we continue to move forward and hear sooner rather than later from the Big Ten in terms of what our conference season looks like and when is it going to start.”

While an official schedule has not been released, there have been reports of some games for the Illini. Per college basketball insider Jon Rothstein, Illinois is hosting an MTE on Nov. 25 in Champaign with Wright State, Ohio and North Carolina A&T. Stadium’s Jeff Goodman reported Illinois, on Dec. 2, will take on Baylor in Orlando for the Jimmy V. Classic. The ACC-Big Ten Challenge is still on, tentatively scheduled for Dec. 8-9.

If they do schedule a game with Missouri, that would leave room for just one more non-conference game. While the MTE in Champaign doesn’t appear to be too strong (the average Ken Pom ranking of those three teams is 195), it could be used as a good tune-up to help the freshmen acclimate. Baylor will be a consensus top-three team, and they could play another top-10 team in Duke or Virginia.

Different schools have different end dates to the end of the semester, meaning some teams’ off days for academic exams vary. In a typical year, Underwood would send his players home for the few days before Thanksgiving, typically Nov. 22 to Nov. 25, but with a game being played on the 25th that may not be possible this year.

“The 22nd-25th we have sent our kids home, and now how do you do that and not have to quarantine them for a period of time?” Underwood said. “So there’s a lot of issues that don’t have anything to do with games but scheduling the games. It’s been maddening. It’s been a challenge.”

If the Big Ten does go to a 20-game conference slate, its schedule will be tough. The Big Ten was on pace to get nine teams into the NCAA tournament last season and should be nearly as good this season. For Underwood, getting to play in the Big Ten healthy is priority number one.

“We want to be safe,” Underwood said. “That is the most important thing. Not every conference is testing the same way we are. Our biggest concern is to try to avoid (COVID-19), so we can play Big Ten games and play as many Big Ten games as we can.”