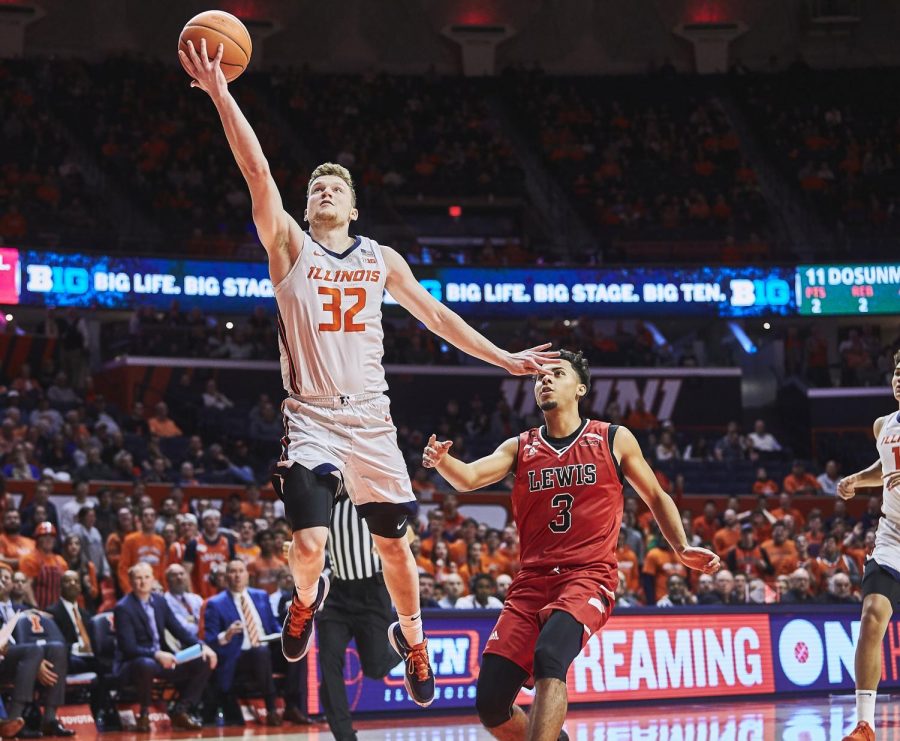 Tyler Underwood goes up for a layup in a game against Lewis University on Nov. 1, 2019. Underwood elected to come back and use his final season of eligibility this year.

When Tyler Underwood stepped off of the floor at the State Farm Center after a 78-76 win over Iowa on senior night, he assumed that would be his final time playing on that court.

But the coronavirus pandemic limited the number of coaching opportunities available, something Underwood had his eyes on. After discussions with his family, Underwood decided to use his final year of eligibility and return to Illinois for one more season.

Underwood’s college basketball journey has been a long and eventful one. He started his career at Stephen F. Austin and transferred to Oklahoma State for one season before settling in Champaign with his father in 2018. Underwood has been on teams that have made the NCAA tournament. He’s played against a team that won the National Championship (2017 North Carolina) and played against a Naismith Award Winner in Kansas’s Frank Mason.

So when Underwood decided to return, his father, Brad Underwood, was more than pleased to have Tyler’s veteran presence back on the roster.

“I think one of the things that goes under-appreciated with Tyler is that nobody knows our system and our stuff better than him,” Brad Underwood said. “He’s engrained in it, he’s a basketball junkie. He’s well-versed. He’s also got a relationship with our players that is different than a coach.

On the court, it remains to be seen how much time Tyler will get in the rotation this season. But that doesn’t mean behind the scenes he hasn’t been a huge help. Tyler has been instrumental in helping the incoming freshmen adjust to college life. Whether it be walking them through a play or helping them eat better, he has been someone they look up to. One freshman in particular that Tyler has spent a lot of time with, is freshman guard Andre Curbelo.

“One thing that has impressed me about ‘Belo is his level of maturity that he’s come in here with,” Tyler said. “I was not that mature at 18. The way he carries himself, he acts like a professional. He works really hard and he asks questions and wants to be coached. He wants to learn.”

Coaching is a path Tyler could see himself doing after his playing days. He’s got a passion for the game and wants to stay around it. But the focus for this season is getting Illinois back to the NCAA Tournament for the first time since 2013. Tyler was a part of the Illini teams that finished in the bottom half of the Big Ten and now looks to help Illinois complete its rise to the top of the standings.

Tyler played on NCAA Tournament teams at Stephen F. Austin and Oklahoma State, but to get there with Illinois would mean a lot.

“That’s been a goal of mine to be able to represent the University of Illinois in that tournament,” Tyler said. “To get this program back where it belongs. We were on the right track last year so to have that ripped away, it definitely hurt. This year, that’s the goal to get back there.”

To get back to the tournament, Illinois will need stars Ayo Dosunmu and Kofi Cockburn to play well. While the talk in Champaign this summer was about the return of Dosunmu and Cockburn, it was technically Tyler who made the decision to return first, something he likes to joke with Dosunmu about.

“Yeah, I mess with Ayo about it a little bit,” Tyler said. “I was just fired up they are coming back. It was pretty funny, we got some good laughs out of it.”