Illinois to host Purdue in first home game of 2020 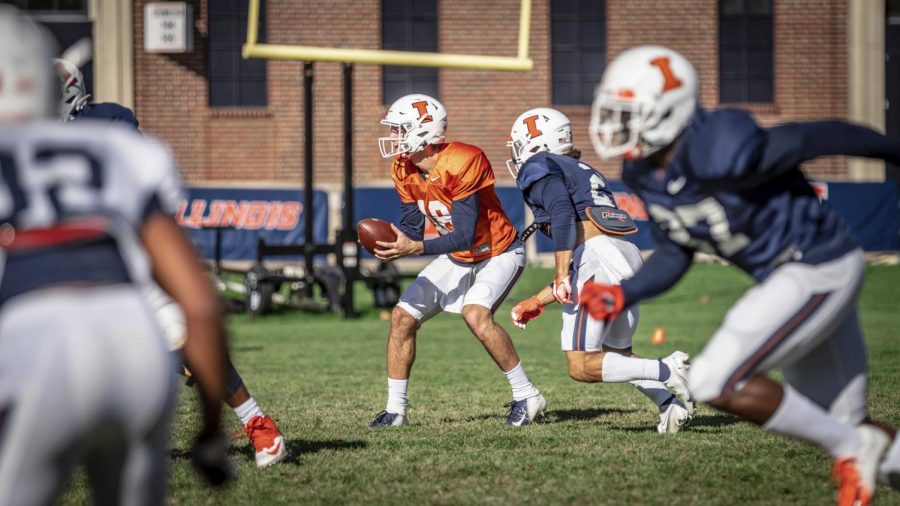 Quarterback Brandon Peters snaps the ball during practice on Oct. 13.

The Illini will play their first home game of the year Saturday morning, hosting the Purdue Boilermakers at 11 a.m. CST.

Illinois and Purdue are facing off for the first time since last October, a game where the Illini traveled to West Lafeyette and beat the Boilermakers 24-6 in cold and rainy weather conditions.

Illinois, who began its season at Wisconsin last Friday night, is coming off a 45-7 loss to the Badgers. The Illini offense was unable to score and their nine-game week one win streak was snapped.

Purdue, although without star receiver Randale Moore, beat Iowa at home last Saturday 24-20 to begin the season 1-0. Sophomore receiver David Bell was the most impressive player on the field, catching 13 passes for 121 receiving yards and three touchdowns.

After putting up zero points on offense last Friday, the Illini must be able to find a rhythm quickly on Saturday if they want to have any chance of winning against Purdue. The Boilermakers bring a strong defense with an impressive front seven that held Iowa to only 20 points in week one, including only allowing three points in the second half.

Offensive coordinator Rod Smith said he’s seen the improvements in the Purdue defense and is expecting another challenge on offense this Saturday.

“I’ll tell you right now, we’ve been watching the last couple of days, they’re a much better defense than they were last year. They got some different personnel in now, they’re more athletic, they’re bigger,” Smith said. “A lot of variations, a lot of different looks to try and confuse offenses and quarterbacks.”

Illinois senior quarterback Brandon Peters said he knows about the Boilermaker defense as well. And after a sub-par performance in week one, he and the offense know what it will take to get the team going on Saturday.

“Purdue, just watching the film today, they’re really stout up front. Their front five is really good… We got a challenge ahead of us, Peters said. “I think as long as we get those guys contained up front and establish a run game, that’ll be a big positive for us.”

Illinois’ defense gave up 45 points to the Badgers on Friday and are also looking to rebound after a disappointing performance. Freshman quarterback Graham Mertz lit up the Illini secondary by throwing for five touchdowns and only had one incompletion on the day.

Illinois will be without senior linebacker Jake Hansen due to a concussion suffered in week one, but will likely return senior defensive end Isaiah Gay and sophomore defensive back Devon Witherspoon, both of whom missed the opening game at Wisconsin.

The Boilermakers will likely be without star receiver and potential first-round NFL draft pick Rondale Moore after also missing week one. Even without Moore, however, Purdue boasts a strong offense that was impressive against Iowa, largely due to Bell and the rest of the receiving core.

“Without Rondale, and I mentioned Bell earlier, I mean he was as good a freshman receiver as there was last year, and the rest of their receivers I might add. So I think they have an excellent receiving core without Rondale,” head coach Lovie Smith said.

Both teams will be motivated to get a big win Saturday morning at Memorial Stadium. The Illini are playing in what some believe is a “must-win” game after the blowout loss in week one and a tough schedule ahead. And the Boilermakers are looking for revenge on Illinois after losing to them at home in 2019 in terrible weather conditions.

With both teams hungry for a win, the battle for the Purdue Cannon trophy should be a hard-fought game between two longtime rivals. To keep the game competitive, however, the whole Illinois team knows that a major turnaround will have to come after a blowout loss to open the season.

“When you play your first game, that’s when you really see where you are. That’s when you can really start making improvements based on what you need to,” Smith said. “We’re gonna have a great week of practice, we’re gonna get some of our guys back … it’s everything is what we’re gonna do.”