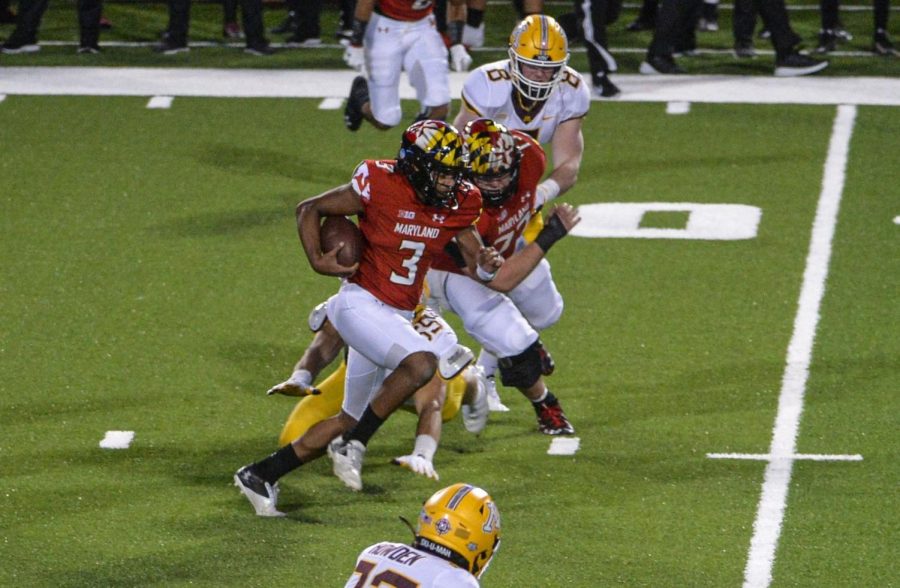 Maryland quarterback Taulia Tagovailoa runs for a first down in the first quarter against the Minnesota Gophers at Capital One Field on Saturday. The big run set up a Maryland touchdown.

Week 2 was another week to forget for Illinois, with starting quarterback Brandon Peters and tight end Griffin Moore’s positive COVID-19 tests, throwing a wrench in the game plan against Purdue. Fourth-stringer Coran Taylor made some good plays, though turnovers and missed opportunities in the red zone cost the game for the Illini. It seems the Peoria native will continue to get snaps over the next few weeks, as Peters is forced to sit out 21 days before being eligible to return.

Let’s look at how other teams around the Big Ten fared in Week 2.

Coming off a 40-point loss to Northwestern, a team that only won one conference game last season, the Terrapins returned to College Park to take on the Golden Gophers, who started the season ranked No. 21 before falling out of the AP Top 25 Poll last week following a loss to the Michigan Wolverines.

Maryland quarterback Taulia Tagovailoa struggled in the season opener, throwing for only 94 yards; he certainly made up for that performance on Friday night. The Hawaii native threw for 394 yards and three touchdowns, while he also added 64 yards and two touchdowns on the ground. In a high-scoring, back-and-forth affair, the Terrapins scored 17 unanswered points in the fourth quarter to send the game to overtime, where Minnesota missed an extra point to hand Maryland their first win of the season. Minnesota running back Mohamed Ibrahim ran for 207 yards and a career-high four touchdowns in the loss.

Minnesota looks to get their first win of the season at Illinois on Saturday, while Maryland travels to Penn State.

One of these teams entered the game coming off a 25-point win against a team that finished in the top 10 nationally last season. The other limped in after falling to Rutgers, a team that hadn’t won a Big Ten game since 2017, at home. Given last week’s proceedings, you would never have believed that Michigan State would leave the Big House with a victory.

After turning the ball over seven times in their season opener, the Spartans knew they had to improve if they had any chance on the road against their arch-rival. With the Paul Bunyan Trophy on the line, Michigan State quarterback Rocky Lombardi threw for 323 yards and three touchdowns, while receiver Ricky White finished the day with nearly 200 yards and two scores.

Despite allowing over 150 yards on the ground and 300 in the air, the Spartan defense made big plays and got stops when they needed to, providing the Big Ten with the upset of the week.

With the loss, Michigan falls to No. 23 and travels to surging No. 13 Indiana, while Michigan State heads to struggling Iowa.

After getting their first Big Ten win since 2017, the upward-trending Scarlet Knights welcomed the surging Hoosiers to New Jersey in a matchup of unexpected undefeated teams.

Rutgers got off to an early 7-0 lead, but Indiana put up 23 unanswered points, and the home team never really looked up to the challenge. Indiana quarterback Michael Penix Jr. threw for 238 yards and three touchdowns in the win, while Rutgers quarterback Noah Vedral finished the day with 130 yards, two touchdowns and three interceptions.

Arguably the most exciting play of the weekend came late in the fourth quarter, where a crazy lateral play on fourth and 32 saw Rutgers score a touchdown to bring the game within one score, though the play was ultimately ruled back due to a forward pass.

Rutgers, already guaranteed their best conference record in three years, travels to No. 3 Ohio State, while No. 13 Indiana welcomes No. 23 Michigan next weekend.

After routing Maryland in their season opener, Northwestern traveled to Iowa City to take on Iowa, who lost to Purdue in their first game of the season.

Iowa was firing from all cylinders in the first quarter, with the defense forcing two turnovers, including a fumble recovery returned for a touchdown, to put the hosts up 17-0 by the end of the first frame. Despite being down by double digits midway through the second quarter, Northwestern came to life, though they didn’t take the lead until the third quarter. The Wildcats’ defense forced three turnovers, including a game-sealing interception with one minute left to play, en route to a one-point victory.

Northwestern, who sits just outside the top 25, looks to extend their unbeaten run against Nebraska next week, while Iowa hosts Michigan State

Both teams entered the season among the top 10 programs in the nation, though an upset loss to Indiana widened the rankings gap between these two teams. Despite rallying late, the Nittany Lions fell at home to a top playoff contender.

Buckeyes quarterback Justin Fields once again proved why he is one of the favorites to win the Heisman Trophy, throwing for 318 yards and four touchdowns in the win, while running back Master Teague finished with over 100 yards on the ground and receivers Chris Olave and Garrett Wilson picked up over 100 yards apiece in the air. The Ohio State defense held Penn State to just 44 rushing yards but failed to contain receiver Jahan Dotson, who ended the day with 144 yards and three touchdowns, both career highs.

No. 3 Ohio State will play host to Rutgers next week, while Penn State falls out of the top 25 with the loss and will welcome Maryland to town in search of their first win of the year.