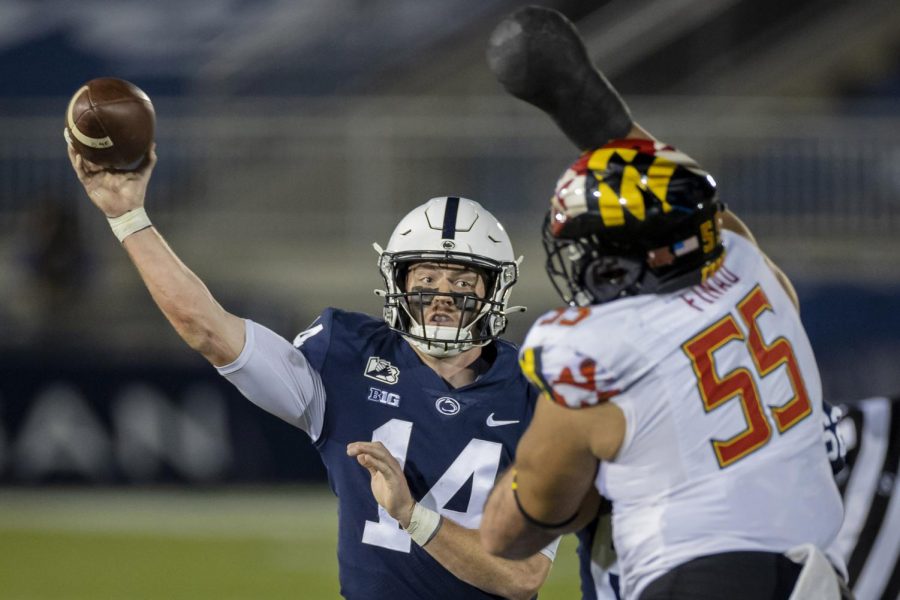 Penn State quarterback Sean Clifford throws under pressure from Maryland’s Austin Fontaine during the second half at Beaver Stadium in State College, Pennsylvania, on Saturday.

Where do you even start with Illinois’ performance against Minnesota on Saturday? No passing game, no run defense and penalties all cost the Illini, and the team remains winless three weeks into the season. Let’s forget about how head coach Lovie Smith’s squad played this weekend and take a look around the Big Ten, shall we?

Entering the 2020 season, Northwestern was a unanimous bottom-two team in the Big Ten West among CBS Sports analysts. After three games, the Wildcats have proved pundits wrong, and they currently sit atop the division with five weeks of competition remaining.

The Wildcats have relied on their run game and defense over the past three games, as they have rushed for an average of over 200 yards per game while allowing only 12 points per game thus far.

This week, despite turning the ball over twice, Northwestern edged Nebraska thanks to a second-half shutout of the Nebraska offense. Quarterback Peyton Ramsey threw for 169 yards and two touchdowns, the offense ran for almost 150 yards and the defense forced two takeaways as Northwestern continued their unbeaten start to the season at Ryan Field in Evanston.

Northwestern, jumping into the top 25 (No. 23) for the first time this season, looks to continue its perfect start against a fellow undefeated team next weekend, as they travel to West Lafayette to take on Purdue, while Nebraska, still looking for its first win, hosts unexpectedly winless Penn State.

After two weeks, these teams looked to be heading in completely different directions; Iowa climbed into the fixture looking for its first win after barely losing to Purdue and Northwestern over its first two games, while Michigan State entered with confidence after defeating rival Michigan at The Big House last week. Michigan State may have been a bit too confident, however, as Iowa won by six possessions to earn its first victory of 2020.

After a rough start to the season against Rutgers, Michigan State quarterback Rocky Lombardi bounced back last week against Michigan, throwing over 300 yards and three touchdowns against one of the most consistently dominant programs in the Big Ten. This week, the junior took two — or maybe five — steps backwards, throwing three interceptions in the loss, his second game this season with multiple turnovers.

Iowa relied heavily on its run game, rushing for 226 yards and four touchdowns as a team with exactly half of that production coming from sophomore running back Tyler Goodson. Iowa dominated in all facets of the game, as the defense scored on a pick-six and the special teams returned a punt for a touchdown.

Looking to keep its momentum going after picking up their first win, Iowa travels to Minnesota next week, while Michigan State plays host to one of the hottest teams in the Big Ten in Indiana in Week 4.

It’s hard to imagine Indiana entered the season unranked and only received one vote in the AP Poll before the Big Ten season began on Oct. 23. Yet after three straight victories, two of which came over ranked teams, Indiana has solidified its place among the best teams in the country after a win over Michigan on Saturday.

Hoosier quarterback Michael Penix Jr. dominated once again, throwing for 342 yards and three touchdowns in the win, while running back Stevie Scott III finished with 97 yards and two touchdowns on the ground, his second two-touchdown performance of the season. The Hoosier defense put in another strong performance as well, forcing two turnovers while only allowing 13 rushing yards to an offense that averaged over 200 yards on the ground coming into the game.

While Michigan quarterback Joe Milton threw for 344 yards and three touchdowns, his two interceptions proved costly, as they came on back-to-back drives in the fourth quarter with his team already trailing by double digits and in search of a comeback. If Michigan is to take a positive out of the game, receiver Ronnie Bell finished with 149 yards and a touchdown, just one yard short of a career high for the junior.

The win sends the Hoosiers up to No. 10 in this week’s AP poll, while the Wolverines fall out of the rankings for the first time this season.

Indiana aims to stay unbeaten against Michigan State next weekend, while Michigan hopes to right the ship at home versus Wisconsin, though it is unclear if that game will be played due to several active COVID-19 cases in the Wisconsin program.

Penn State entered the season ranked No. 9 in the AP poll, while Maryland sat eons outside of even being considered a top-25 team. We are now three weeks in, and neither of these programs could’ve expected such polar opposite starts to this unprecedented season.

Maryland quarterback Taulia Tagovailoa’s first collegiate start was anything but perfect. He threw for less than 100 yards and three interceptions against a Northwestern team that only won one game in the Big Ten last season. After three games, this looks more like the guy Maryland was so excited about when naming him its Week 1 starter. The Hawaii native threw for 282 yards and three touchdowns, with more than half of those yards and two-thirds of those touchdowns going to receiver Rakim Jarrett, both of which came on nearly identical big completions in the first quarter.

Turnovers were the name of the game for Penn State once again, which has had two games with three turnovers already this year. Despite possessing the advantage in first downs and total yards, Penn State rushed for less than 100 yards for the second consecutive week. While this team may have had one of the toughest stretches to start its season, they entered the year ranked in the top 10 to open the season, and they certainly need to improve to escape the cellar of the Big Ten East division.

Having already doubled its win total from last season, Maryland looks to extend its win streak with an upset win over Ohio State next weekend, while Penn State hopes to get its first win of the season against Nebraska.

After starting several weeks behind three of the five Power-Five conferences, ranking Ohio State fifth in the country before they even played a game seemed a bit excessive. Three straight dominant wins later and the Buckeyes have solidified their place as one of the best teams in the nation.

Ohio State quarterback Justin Fields continues to prove why he is one of the Heisman Trophy favorites, finishing the game with 321 total yards and six touchdowns, five in the air and one on the ground. The Buckeyes dominated on both sides of the ball, putting up over 500 yards of total offense while also forcing two turnovers on defense.

Despite entering the fourth quarter with a 33-point deficit, the Scarlet Knights showed some fight at the end, scoring three touchdowns in the game’s final frame. Receiver Bo Melton led the team with 83 yards, the most he’s had in a game since Aug. 30, 2019.

Ohio State remains the No. 3 team in the country and will take on Tagovailoa and Maryland in Week 4, while Rutgers looks to bounce back at home against a struggling Illinois team.