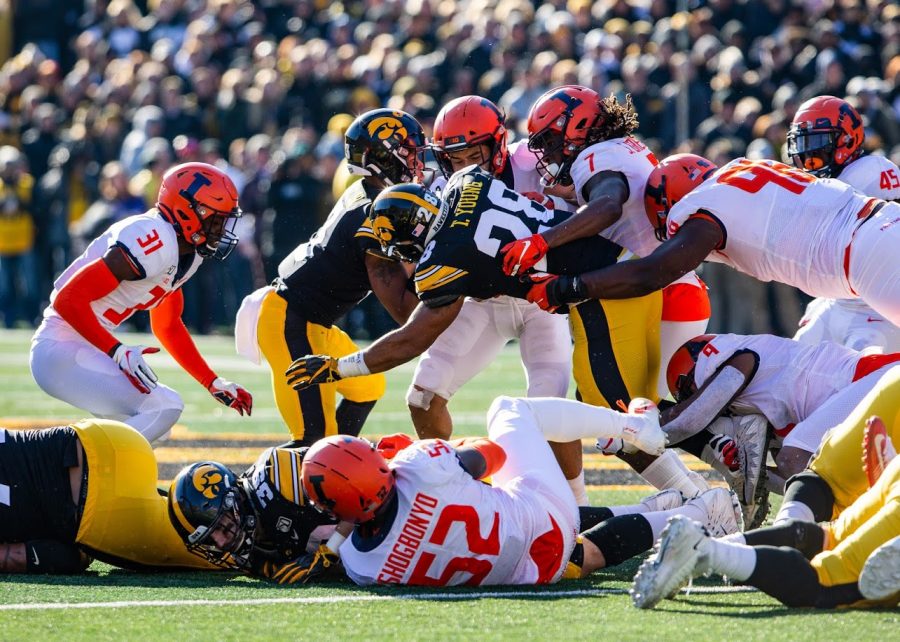 Illinois tries to tackle an Iowa player during the game against Iowa on Nov. 23. Sophomore defensive back Devon Witherspoon has been a key contributor for the Illini so far this season, accumulating 15 tackles in two games in 2020.

Sophomore defensive back Devon Witherspoon didn’t play football seriously until his junior year of high school when his mom pushed him to pursue the sport. Sure, he played when he was young, like most boys, but he also had hoop dreams, which deterred him from football.

But then his mother pushed him to join the Pine Forest High School football team in his hometown of Pensacola, Florida. Shortly after, Witherspoon realized a football career past high school could be plausible as he earned his first offer from Troy University in his first high school season.

“Once the opportunity presented itself, I just took it and ran with it,” Witherspoon said.

Witherspoon’s high school success continued, as he earned 2018 Pensacola News Journal Defensive Player of the Year and 2018 Pensacola News Journal All-Area first team. He got offers from Georgia State, Appalachian State and South Alabama, among others. But Witherspoon decided to attend Hutchinson Community College instead and arrived on July 9, 2019.

He wasn’t there for long. After Witherspoon got his SAT scores on July 10, he was contacted by Illinois. Things moved quickly, and he committed on July 29, 2019, just days after visiting. He then arrived on campus Aug. 10, 2019, four days before training camp.

Because he came to Champaign so late, Witherspoon wasn’t able to practice right away. That didn’t stop him from learning head coach Lovie Smith’s defense on his own.

“Just paying attention and getting mental reps, learning it from the older guys,” Witherspoon said. “Marquez Beason, he really helped me through a lot when I first got here, and he was the only freshman when I got here, too. I just took what they gave me and just getting those reps, trying to learn quickly so I could get into the system.”

Flash forward 15 months and Witherspoon has earned a starting cornerback spot as a sophomore. After missing Illinois’ first game of the season at Wisconsin, Witherspoon played almost every defensive snap in weeks two and three, totaling more than any other player in the secondary at 145.

Witherspoon picked off the first pass of his career in Saturday’s loss to Minnesota, something that didn’t surprise Smith.

“He’s one of the toughest guys on our team,” Smith said. “Probably the toughest guy on our team, pound for pound. No one competes harder than him. He’s still a younger player, but he’ll have more and more success. Getting his first interception, of course, is big.

“We expect bigger things in the future from him. A guy that you just love as a football coach.”

Witherspoon’s true potential began to show early in his freshman season as he embraced his special teams role, leading the team in special teams tackles with 13. He played in all 13 games in 2019, eventually starting in three at cornerback. Witherspoon was the only defensive true freshman to start in 2019.

Thrown into the mix pretty quickly, Witherspoon admitted he was nervous early in his freshman season. But during the Iowa game, when Witherspoon had to step in for a depleted secondary, he finally felt settled into his role.

“I was really nervous that game,” Witherspoon said. “After the game, it gave me confidence. Like you’re here now. There’s no going back to where we came from.”

While the Illini secondary this season has been a weak point, Witherspoon believes the group’s chemistry is still coming together but that success will come soon. Now that trust has been established between players, it comes down to executing the game plan better.

One thing Witherspoon knows they have to improve on is eye discipline. He said while the wide receiver is running his route, the defensive backs must focus on the man and only look when their man looks.

While the secondary must improve for the team to find success in 2020, Witherspoon believes the talent is there. And for now, Witherspoon will continue to bet on himself, something he’s done his entire life.

“It’s just from the heart,” Witherspoon said. “I think I was born with it. I never let my size get me down. Even though I wasn’t the biggest, I always played with the biggest heart. I never let that stop me from doing what I have to do.”