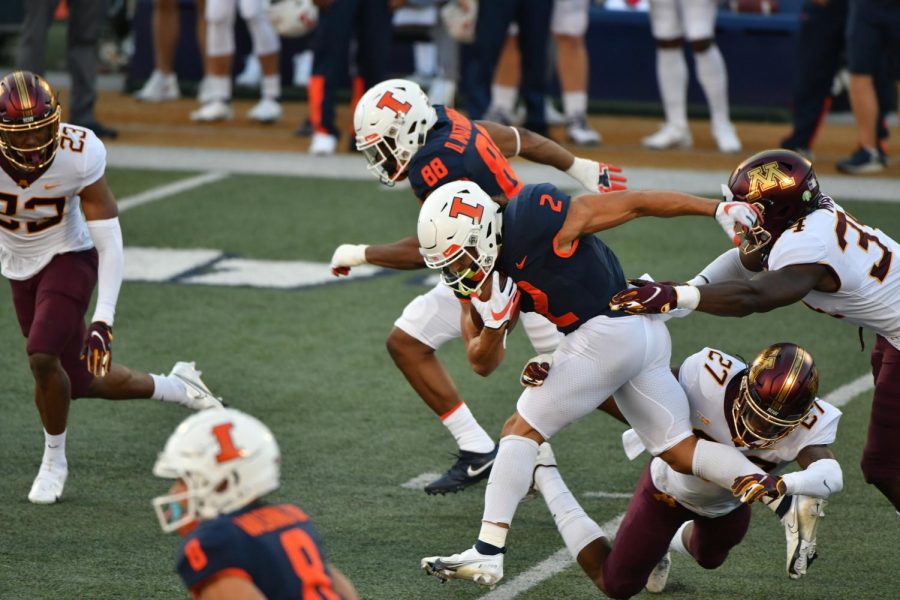 Running back Chase Brown barrels through defenders during the game against Minnesota on Nov. 7. The Illini lost the game 41-14.

Coming into the 2020 season, it was unclear exactly how the running back room would look for Illinois, with multiple names expected to see the field. Senior Mike Epstein is the veteran name in the group, while younger guys like sophomore Kyron Cumby and redshirt sophomore Jakari Norwood also have potential.

Through four weeks and after a career-game at Rutgers, however, a bright spot in the backfield this year has been the efficiency from redshirt sophomore Chase Brown.

It has been Epstein and Brown this year who have seen the most carries for Illinois, but after a breakout performance in the Week 4 win at Rutgers, Brown is leading the team in rushing yards and yards per carry among the running backs.

A transfer from Western Michigan, Brown redshirted last year after playing short minutes in just four games. After his big game at Rutgers, however, his head coach has loved the way he’s been able to settle into the team and find his role.

“He’s been patient with just his entire time here, having to sit out all last year,” Lovie Smith said. “You got a chance to see (against Rutgers) what we’ve seen quite a bit, behind the scenes, with what we think Chase can do.”

Brown ran for 131 yards this past Saturday at Rutgers, a career-high by nearly 60 yards. The speedy sophomore now has 247 rushing yards on the year and is averaging 7.1 yards per carry after the best game of his career thus far.

Despite being so impactful for his team, Brown didn’t realize how good of a game he had until the next day. Nevertheless, he was happy with his execution.

“It didn’t really sink in until the Sunday after the game. I mean I looked at the stats after the game, and I didn’t even know I had 130 (yards),” Brown said. “I was excited about it, felt really good about the way I played. I just gotta keep on performing and doing well for the team.”

Averaging as many yards per carry as he does comes as a result of two abilities Brown possesses: breaking tackles and speed.

After Illinois’ Week 1 loss at Wisconsin, Brown expressed concern about playing too fast. His head coach, however, thinks it’s the best part of his game and that it is impossible to be too quick.

“I’ve never seen a player play too fast,” Smith said. “The faster, the better. I just know he’s a good football player and can make you miss in the open field.”

Brown was able to break out for multiple big runs on Saturday, including a career-high 39-yarder. Despite the consistent amount of carries in the middle of the field, though, he hasn’t found the end zone quite yet this season.

It has been Epstein that’s gotten the ball on the goal line for the Illini so far this year, who has two rushing touchdowns on the season. Despite not being the goal line guy, Brown said he will play any role his coaches give him and that it’s a goal of his to be able to finish off his runs with a touchdown.

“I’m willing to do whatever’s best for the team. Mike (Epstein) does a great job getting the ball on short yardage, especially on the goal line,” Brown said. “I’ll find the end zone at some point. … I need to finish those big plays and strain and push myself to get in there.”

The Illini put up 338 rushing yards against the Scarlet Knights, and if the team has any chance of nearing those numbers again sometime this season, Brown will have to continue to play the way he has.

The quarterback situation moving forward for Illinois is unknown. Isaiah Williams started against Rutgers and leads a run-first offense, where Brandon Peters, who has now recovered from COVID-19, is a dual-threat quarterback and will pass a lot more.

Either way, the coaches plan on using Brown on offense similar to how they did in Week 4. Brown says his success not only comes from his work ethic and his confidence will continue to be key to his performance.

“I was running confident. I was feeling good moving,” Brown said. “I feel like if I can run like that all game I can have a bigger impact (for the team). … Hard work’s paying off.”